Words sometimes don’t matter as much as one may think; sometimes one has an urge that goes against establishment “facts”. Facts are just what lawyers acting for corporations have established for their clients; in The Kindly Ones they simply don’t bother to answer the charges. The exact reason for the guy saying “no” to the Council doesn’t really matter; he uses a form of words to get out of the logical trap and into an area of Kinship.

That seems to be what Melissa Scott means by “Law and justice are not everything”. Roman Law () - when push comes to shove human freedoms are what count. America has become a litiginous country, and therefore under the rule of law, not freedom. That matters if the future becomes a logical trap of Amazon Houses, neutered sex/robo-sex; the gradual extension of sameness as opposed to Dionysian wildness and instinctive lusts.

To be honest with you, when Trump the other day came down on the NRA by advocating confiscation, 21 age limit and maybe assault rifle bans I was prepared to review my view. The next day, following a meeting with the NRA, it was back to business as usual. That was enough to convince me Trump is in a logical trap; he cannot think outside of the idea that freedom can be established by law. No, that’s not freedom, it’s order. And it’s become a geometrical order, one that leads inevitably to AI.

Law can interpret freedom with rules, restrictions. It can ban assault rifles no problem. If the NRA don’t recognize that, then they are already cy, they are already Martians in our midst. If Trump can’t think his way round that he has to go (25th amendment). No doubt similar things apply to China or Russia but this is the land of the free.

There’s something else America is. It was originally built on faith (Mayflower Pilgrims) and hence the “natural man”, the Nazarene as opposed to Roman Law. A country built on faith is fortunate, and has a covenant - as Molly Kiniry in DT says, Billy Graham as much as Capitol Hill. In the modern situation that’s doubly important since we’ve now a corporate reality that’s to do with order and not freedom. This goes back to the quote from American Flagg! (Wild Horses)

“The American spirit – the honest, open-handed force of solidarity – has been castrated, By the banks.. by big business.. by slimy fat cats who use patriotism like a tart uses cheap perfume..” (Plexus Ranger Flagg)

The assumption that future societies become corporate could lead on toStarstruck – the feuding Bajar and Medea dynasties. However, Starstruck also has a vein in cloistered goings on; I mean the secretive nuns of the cloistered veil. I can’t say I know a lot about it, and maybe that’s the point! As Brucilla says, “they don’t get nun”.

Starstruck may be the most confusing comic of all time and to that extent more like a real society; the characters tend to mess-up, plans are flawed. Because there’s not much law, there’s high-spirited adventure galore. As I said to MWK the other day, a society without spirit, faith, freedom is not much of one and a hell of a lot of Starstruck isn’t plot, just interestingly bizarre happenings.

One thing I did wonder is if Mary Medea’s long-term plan – The Great Change – is actually cy? Mary Medea is masquerading as Queen Glorianna of Phoebus, and seems to have a thing going with the cybernetic cluster (in Pictorial 16 I confused her with Molly who is Galatia 9). If so, by my criteria that would be pure order, or death, so another mess-up. The cloistered nuns of the cosmic veil may have something to say about that (the counter-scheme of Ronnie Lee Ellis, the renegade Bajar polymath.)

The problem with a society not built on faith is it becomes a logical trap with no conceivable way of rebellion. Faith has to acknowledge death, and gains its spirit from regeneration and rebirth. These are Dionysian qualities, of the female as much as the rational male. Diana the huntress roams at will with her hounds; Proserpine of the underworld and the spring; Venus of the gloaming.

A society without spirit is mere existence; non-life, non-death. Add a cyber-framework and keep smiling, hoping it fools us (again). I’m not blaming everyone since they’re in the grip of a rational order. Take this diagram of global-green economics from noted Oxford academic Kate Raworth 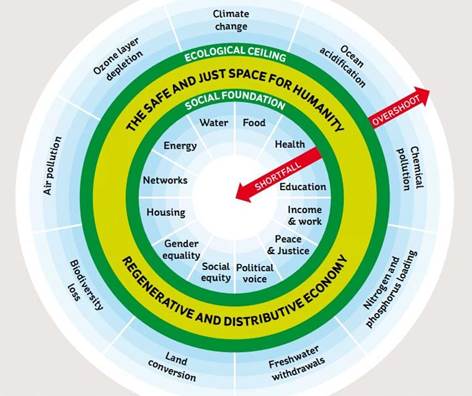 You can just imagine this going down well in Babcock Ranch – so, what’s wrong with it? It’s rational and therefore much too optimistic! Where it says “regenerative” that actually means death and rebirth, the eternal cycle. In order to have a spirit of adventure one needs to appreciate death and sacrifice. Tribes and ancient societies have rituals associated with faith in the deities of rebirth.

Any electric-green future tries to replace faith with investment, and so divorce Man from the instinctive urge of Dionysian revelry in wildness, the land of faerie and flowering things (as covered in BWS’s Adastra in Africa). It’s a clever way to have a corporate future that is also green, and allows for the cy-dollar to flourish in the centre of that diagram.

If you notice, she has “Housing, Gender Equality, Social Equity, Peace and Justice” all together. That could just as easily be “Amazon Housing, neutered sex, Roman Law” – as opposed to tribal custom and the harshness of tribal justice seen in Adastra in Africa. I’m not saying it’s all good, just that the eternal optimism of rational thought has the cy-dollar as its inevitable end-goal. “Their” smiling faces cannot disguise that fact.

I’ve lately been following fashion, and the leaf-strewn Chanel Paris show caught my eye with tall ancestral trunks set in a capacious space for models to float airily around. It was all a bit much for DT’s Lisa Armstrong,

Was there a poignant metaphor wrapped inside their slightly rotting veins?  Or was it just the way they clung stubbornly to the front row’s kitten heels, skewed like shrivelled lettuce on a kebab, emitting a pungent forest aroma.

I think what she was getting at was it wasn’t preternaturally optimistic as the usual fair. Yet, the space they were carolling round was Dionysian, the land of faeries and mushrooms. Set that against upbeat fashion and it seems to jar their tender sensibilities. Because Dionysus is at once a celebration and a recognition of mortality. Anything else is unreal. 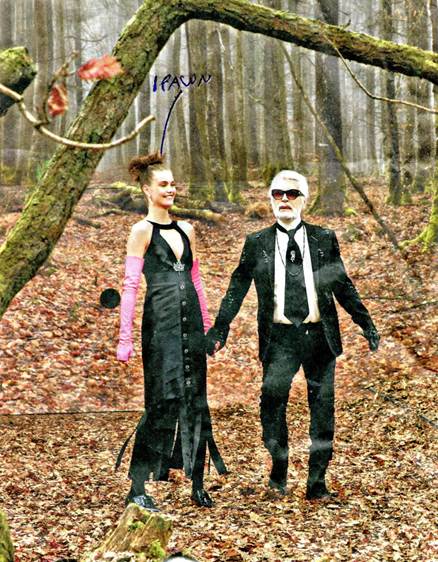 Fashion often strikes me as slightly unreal because you have all these business suits behind it – what’s with the business suits? Why can’t we dress in frilly fabric? As the cult film Glen or Glenda (Ed Wood) says, tribesmen do just that. In days of yore men’s clothes were adapted to their custom, and of course it wasn’t making money! Starstruck has a nice line in dandified dress; women and men are sometimes hard to tell apart as you’ve the Bajar twins and Brucilla, apart from the obvious Erotica Ann.

The reason seems to be they’re not simply fashion, they’re work clothes whether the work is turning cards, running an empire, running round a rec station or running a spaceship. Kalif wears a feather in his fez; Randall has a florid ruff; Rah seems to sprout cauliflower sleeves. There’s not a hint of the businessman/dollar in their ensembles, which makes them appear more like Man of yore. Clothes are there to clothe the body, so served the customary work of the body, which was often to wander harsh and wild places, on foot or horseback.

A picturesque costume is a sure sign of being close to nature, closer to God if you like. Pulps that feature rugged types tend to be kitted-out in gay ways. Conan’s leather-bound sandals, the beads and bangles bestowed by BWS.. The gay-seeming attire and the often fatal purpose; to be close to nature is to be aware, not of the preternatural dollar and its confinements but of flora and forest. The gayness that is part of the cycle of things, the nymphs that hover in the background. The dark embrace of the forest; life and death.

Pulps cover the harshness of life in its true nature. On the illustration front, NC Wyeth portrayed hard and primitive Man of both races on the American frontier. This painting of Robin Hood’s last arrow has a powerful romance. 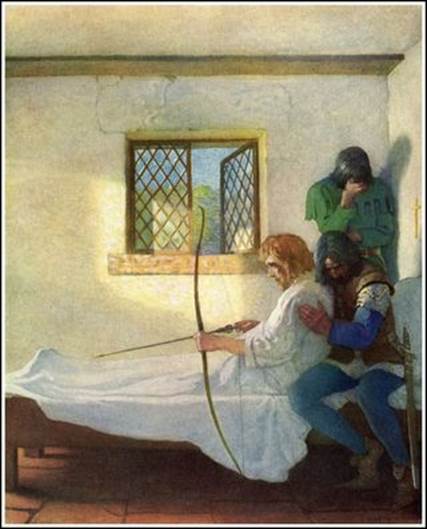 His parable of the barren fig tree, by the way, has Christ in the costume of a wanderer. I read somewhere this is probably more accurate than the Renaissance-style robe. 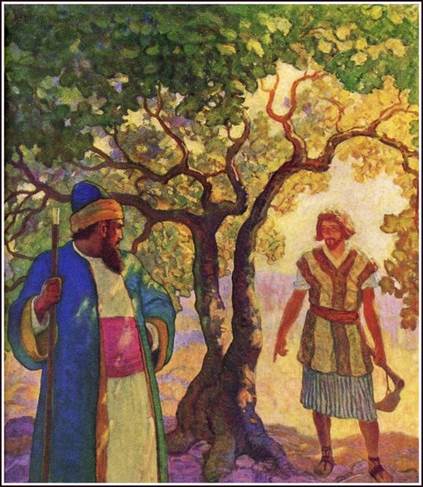