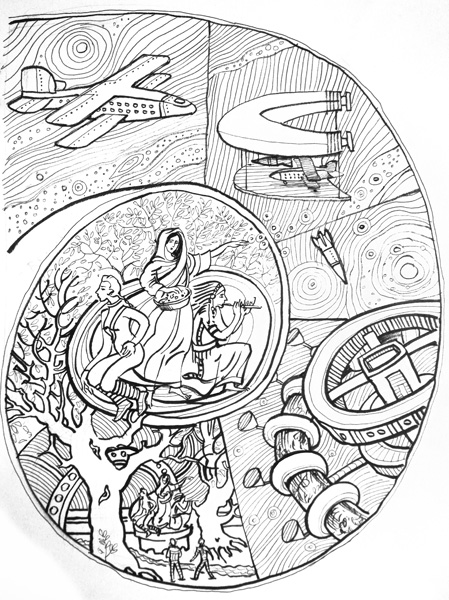 The hidden horror of the Amazon House syndrome is life as mere existence, the cyzz factor in some giga-dollar industry. Where for “them” information is the key, for us it is spirit, the eternal round, the baying of hounds, blood calling to blood (or Blood). Daphne of the laurel; Proserpine of the underworld and of spring; nymphs in grottos; water tinkling over stones. The lost world of exhilaration and raw health. When they talk of “sequencing genomes”, that’s not health; it’s treatment of symptoms of distress, a living death by AI  technician.

Raw health cannot be factored; it’s a feeling, an exhilaration. In our future we’re not gonna outlaw dentists but we’re gonna make damn sure teeth are strong. We’re not gonna outlaw technique but we’re not gonna rely on it. The space-station  is designed to be balanced between male and female and technique is at the service of that ideal. While Magdalene is our patron-saint, we invite Franciscans and nuns to establish a power-base, nurturing and tending to the wilderness.

That is the very soul of health - psyche and physique - and beyond the bounds of mere information; information that inhabits (infests?) existence – Anti-Life, non-being, the cy-dollar of psychotic ego-lust. If you get right down to brass tacks, the alternate future is pre-Newtonian. We will use technique but it will not define us. As Einstein said, “Time is an illusion”, it is what you choose it to be (see Pictorial 1 lifecycle).

“Their” future is the future of atomic clocks. Our future is the future of horology, the universe as ambiguous symmetry (see ). Horology relies on planetary proportion for prediction. Yes, you could choose to ignore cosmic proportions; we choose not to. “Their” future is as accurate as an atomic clock and by the same token fake because it has no proportion. In their future there is no superstition; in our future there is faith which impinges on superstition.

Another interesting fact about Einstein is he was unable to unify electromagnetism and gravity (special and general relativity). If you think about it, though, there can only be a unified theory if the universe is geometrical. The fact that we live in a geometrical parallel reality is just a facet of how fake we are. This reflects on society in numerous ways.

Modern pop strikes me as a semi-synthetic industry – whereas the concrete reality of Ike and Tina Turner assaults the aural cavities with crystal clarity.

We’re aware of the fractious reputation of Ike and it is what it is. The music speaks for itself and for the self-governing commune that is history in all its contradictions. Ike’s diverse arrangements and strolling piano speak for the heart and soul of Man, negative and positive, anytown USA.

The truth is nowadays mainstream America has no awareness of opposites – it’s a case of government VS milieu. “Nutbush” tells you about somewhere around ’64 that no longer exists; diversity of life and expression is no longer what “they” want. The history of sugar-cane cutting? Government does not want an aggressive milieu where differences exist; they want to forget history as a study in contrasts. They say that Ike had anger, and that aggressive tendency fertilized some of the greatest pop-cultural ensembles and duets. “It was ugly,” as Tina says, but she was the “warrior” on stage.

Government is now cy to all intents and, like the majority of celebs, cannot countenance opposite values which do, in fact, exist. The American mainstream have got to watch they do not follow their leaders into the nothingness of talking without awareness, a cy-mentality which leads those to suppose there is no more to life than “getting on”. The likes of George and Amal Clooney glitter in their artificial quagmire of quartz watches as their lifespan counts down to zero worth (those who remember the repugnance of Clooney’s mouthings on Chuck Heston’s final demise are not fooled by Lucifer’s charm).

The gun debate? There is a complete confusion between freedom and order. In order to debate you have to be aware that guns are both freedom and order. The NRA equate freedom with a militia-style order of high-tech rifles. On the other side of the debate, “NRA no way!” and in the middle ground is gun law which is plainly speaking placing limits on freedom not, as Martin Luther King’s granddaughter said, taking away people’s guns.

If our leaders are cy we can no longer follow them as it leads inevitably to death of community. Men either become all the same like a herd of bovines, or they become like their machines; same difference. A commune has faith and faith is self-governing (check lyrics to “Nutbush”.) The cy-mind cannot comprehend this in A world where fact becomes fiction. Govt is now the destroyer of humankind. We must rebel. Welcome to our future.

What happened to the black dream in America? The same as happened to the white dream, they got taken over by the Martian heads. The head that thinks like an atomic clock ticks, the false Apollo, the very accurate fake that makes everything the same and neutered of genuine interest. The organic world where differences will have a psychic affinity has been left behind by an atomic race to deadly sameness. If time is an illusion why are we then tying ourselves to an atomic timepiece? Because “they” want it; the so-called social giga-corporations.

“Superstition” goes the Stevie Wonder song but, if that is the black type, there may be something in it. We of the future believe it to be so. Howard said somewhere, “We count not time,” and, in our space-station, time will not define us. If you look at old paintings, how often do you see landscapes as a merging of wild with civilized? We will import the wild to the sophisticated surroundings of a space habitat because Man cannot live by numbers alone.

I was wondering as I was wandering down the street why the mainstream seem content and suddenly realized it’s as CC Beck said, “They’re supposed to be”(Cosmic Curmudgeon 2) Nihilism is the ideal type who is content with nothing in the way of mysterious proportions, twilit vistas. There is a choice between reality – meaning and power – which cannot be verified – mystery; and nihilism which is verifiable proof – the signs you see all around (see They Live! Tales of Faith 2) 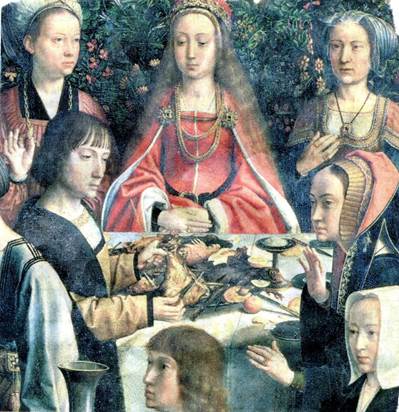 Figures in a landscape breaking the bread – meaning. The Christian truth of lifedeath – power. Without meaning and power there’s no mystery, just existence. The choice is between something which cannot be verified, and a type of nothingness which can be verified, in a fake space-time of atomic clocks (approaching AI). The death of psyche.

Diversity is the great mystery that “they” wish to eclipse. Perhaps I’m being unduly harsh but think about it; if there is no mystery there can be no faith (no tribes). Like alchemists, they are searching for an Apollonian loadstone – the unified theory. Meanwhile, we live in Einstein’s universe of geometry – which is essentially fake. There is no universal geometry; there is only proportionate space – sun, moon (Phoebus Apollo), male, female, lifedeath. Reality.

That is the aesthetic primitive belief. It cannot be proved; but neither can electromagnetism (sun – special relativity) be unified with gravity (space-time – general relativity). You are free to choose: death by number; or reality, harsh, invigorating and the future of Man the introspective adventurer (of North African plains or near-Earth space).

It's not just the aesthetic primitive; it's a matter of cosmic balance. Space is an ultra-male environment, hostile to organic life. Our space-station will have rotational gravity to strengthen our bones; a humid plant-oxidised atmosphere to refresh body and spirit; roots that grow a natural defence to cosmic rays. Nothing is perfect, but without the balance of a feminine aura space is so masculine as to be a cy nightmare. Welcome to low-tech.

“They” will say AI will fix this, that, the other (given “time” the great illusion)> We say, have fun kiddos! Wildness cannot be fixed; it is simply exhilaration, raw health, meaning and power, a spiritual dimension to life's infinite variety. Man, the introspective adventurer of Weird Tales  ilk, cannot be held captive by a mere atomic clock. You might say, what kind of adventure can you have in a confined environment like a space-station? The answer to that is we are starting a genuine space-culture a la Starstruck. We invite Franciscans and nuns into our adventure. Where there is faith there is still adventure because we are finally free of the fake universe of atomic accuracy.

I was astonished close to tiers – tears also – when I saw this Easter piece in DT. Woodhead seems to be implying the Romans were nasty and perhaps it was even a bad idea? She clearly has no (immaculate) conception of mystery and passionplay. In Milton, the crucifixion is ordained right from the Fall (Eden) in a cosmic saga of redemption. The universe of proportionate meaning and power clearly has no effect on those who live in a fake universe of atomic accuracy. I’m not even saying they know it; just that all the signs that surround them are verifiable proofs of that universe (see They Live!)

Our fake universe makes it so easy not to be a believer because there is no meaning in a fake. What Francis Bacon advocated in the 16th century (empirical reason Tales of Faith 5) has the logical conclusion of Einstein in the 20th century, and AI in the 21st.

When Einstein said God was a children’s fairy tale he was perhaps not so far off. This psychic vista is extinguished by the progression of empirical reason. What you have is an Apollonian alchemy (Weird Tales sorcery) that takes verifiable conclusions to their ultimate end. That universe is AI; a very accurate fake; the false Apollo. Accuracy replaces proportion and balance. There is a choice; either we believe in a universe of atomic accuracy (CERN) that is fake, Anti-Life and non being. Or we believe in mystery, passionplay.

The fact that “they” are verifying this, that and the other means that there is no mystery. Mystery is something that cannot be verified. It operates in a psychic universe. You must believe. Then act.