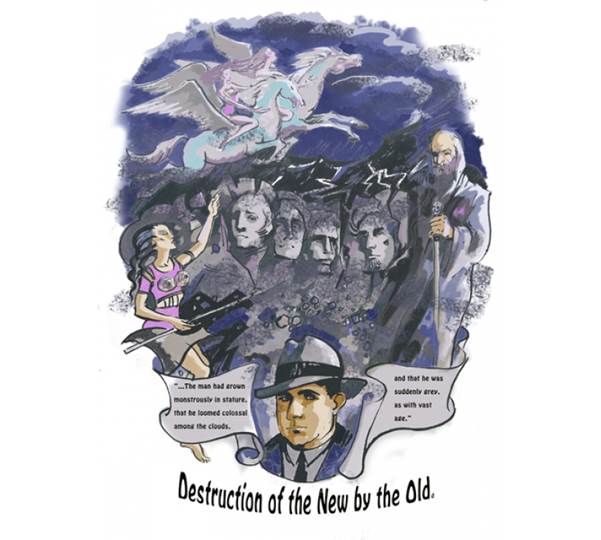 When dreams don’t become their people… you bring the government down” – James Grant, Halleluiah Man quoted in Dreamships  by Melissa Scott

False dream, an illusion.. Howard was demonstrably proud to be an American – free from the shackles of Europe – and I guess a proponent of the American Dream of wide open spaces and pioneer-folk which he saw on his trips round Texas from the smalltown of Cross Plains.

I want to make a very basic point that America was the birth of freedom from European ideology, and one of the ideologies was the new scientific mode of empiricism (see Bacon, The New Atlantis Tales of faith 4). There is another empiricism, which is the ancient truth of the rhythms of the human figure, rituals of cleanliness, anointing in oils and so on (Tales of Faith 10).

This empiricism is Man in a primeval landscape, the province of sight, touch, feel and dirt, commune and field. The pioneer stock was of that type. Howard’s atavism is obviosuly quite closely aligned to that way of life – spartan, or solitary on the plains. People will tell me there’s another America, a corporate America of meritocracy (Wild Horses) , and this is where a fantastic confusion arises. If there are two types of empiricism, there are two different American Dreams!

Howard is of the first type, along with a lot of the musicians whose tracks I’ve played. Why do writers of a particular school get depressed? Not only Howard, but Hemingway blew his brains out. Maybe they are depressive but maybe also the American Dream is a false illusion to these men of action?

It’s an illusion because the romantic Dream is actually the contrary to the dream of progress, which is becoming more AI by the day. There are two totally opposite realities that cannot be reconciled. The NRA are confused, advocating high-tech assault weapons and abrogating communal responsibility. They have become cy as an institution. How cy has Weshington become? How cy are elections run by tweets etc?

Howard was proud to be an American, but he could not be proud of any of that, it’s not possible. His pioneer mentality and love of the Old West conspire against such modern delusions. All this ties-in with what is the conventional thought-process of scientific empiricism, which is the Darwinian struggle to fit the corporate machinery .

The dream of the Old West runs through our subconscious thoughts and images. To become a reality again, see the quote at top.