The American Dream is Jaime Hernadez’s splash from Mekaniks (Pictorial 22). The natural, primitive, physical truth of good old boys and good old girls with good old-time cheer doing what comes naturally. Jaime’s style is absurdly All-American given he’s from Mexico via California (a mix of Chick Young and superhero?)

Jaime is taking a backhand punk swipe at the primitivism of the pulps, almost like Betty Grable guesting on Weird Tales. The American Dream as natural physical grace covers a lot of territory and is quite female-oriented, be it dark and sensual or slapdash. The title Love and Rockets says it all, really. Maggie is a mechanic, the world of precise geometry and order. Only, of course, it’s not, it’s a world of rebellious expression and heroines of fantasy (Penny Century).

A rocket may be a creation of mechanical order, but it escapes from that into a world of primal fury. A rocket isn’t only geometry, it’s also pure force, and the one can destroy the other (as happened twice with the beautiful shuttle). Rocket science is an attempt to contain force (the beauty of 50s autos has the same aesthetic, the Cuban golden age). Force can always prove unruly, and there is a tension with pure order. In CL Moore’s Heir Apparent (Tales of Faith) the beauty of geometrical order dooms the symbiot human to a living death of absorption into the AI machine.

AI is VR (see Pictorial 21) – there is no difference – in other words, it’s not natural physics, it’s a hermetic maze, a beautiful trap for the mind, the future “they” have in mind. In this virtual kingdom everything is fake and they don’t believe in natural physical truth. They believe in “Anti-Life”, a parallel world of hyperloops, electric flying cars and consoles for the mind directed by AI-algorithms.

Now, you’ll say to me Musk is launching his FBR’s to Mars, there’s romance for you.. yes, but he’s given up on Mother Earth. We’re going underground on his hyperloops encased in virtual consoles, flying into an electric-green future of symbiot-heaven.

Musk is very big on transport, so he talks the biggest option to escape Earth’s orbit, but he’s not romantic. Romance would be a rotating space-station like from 2001, A Space Odyssey with cute stewerdesses revolving through airlocks etc. He wants humans a mere appendage to build the biggest (fucking) machine.

Romance is natural physical truth of the human physique, the figure, and so requires a sense of balance and proportion. The pulps always have this in mind as can be attested from the graceful, fin-laden vessels of Al Willimason and Wally Wood. In Melissa Scott’s Dreamships, Manfred (the ship’s AI) is inhuman because his dataset – his VR – constitutes his sole knowledge of external reality. This is the future “they” are setting out; death by geometry, by console-attachment. The future of detached heads and not of the physical human figure (meaning – epistemology)

The natural physical truth that we see in pulp science-fiction. For example, it’s always quite clear to me that CL Moore’s Northwest of Earth stories are fantasy set on Mars. The fragrant low-life figures of the Martian marshes are projections from Earth’s piratical past. The future “they” have in mind is one of facts becoming fiction; it has no natural physical truth of human figures in natural surroundings (meaning).

This segues into the parallel reality of underground hyperloops and flying cars, where fact becomes fiction and the symbiot-head is tied to a VR-console. Death-by-geometry while watching other suckers on the rocket-to-Mars and a half-life of death-by-boredom or perhaps madness –by-nostalgia. 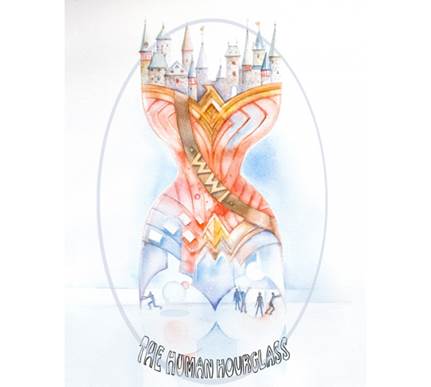 Northwest of Earth are stories of a habitable world where differences – the marshland inhabitants of the canals, Venusians, Earthmen – are piled on top of eachother. It’s not a parallel reality (of sameness), it’s a conventional fantasy world – somewhat like Scott’s Point of Hopes

Northwest Smith bought his shawl in the Lakkmanda Market of Mars. It was one of his chiefest joys to wander through the stalls and stands of that greatest of marketplaces .. So many songs have been sung and so many tales written of that fascinating chaos..

He shouldered his way through the colorful cosmopolitan throng, the speech of a thousand races beating in his ears, the mingled odors of perfume and sweat and spice and food and the thousand nameless smells of the place assailing his nostrils. Vendors cried their wares in the tongues of a score of worlds. (CL Moore, Scarlet Dream, Gollancz Omnibus, page 208)

He followed Rathe through a tangle of untended handcarts, and out onto the wharf itself. It was almost as wide as a city street, but only a single ship, a tidy caravel, the sort that Eslingen had seen in every port along the southern coasts, was tied up at the dock. The pennant at its single mast was a long streamer of scarlet, a gold shape like an inverted heart at the broad end: Caiazzo’s house-sign, it had to be, Eslingen thought, and scanned the caravel’s crowded deck for the man of his imaginings. There was no one among the dozen sailors and bare-backed laborers who matched that description, and the knot of factors gathered by the hoist looked unlikely. (Melissa Scott &Lisa Bennett, Point of Hopes, Tor, page 207)

The places that are simple and visceral have rhythm and proportion, the sort of dingy alleyways that are a fantasy staple. Pools of stagnant water are de rigeur 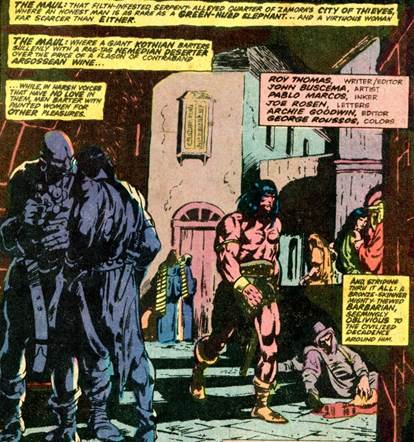 Now, I know what you’re thinking, this is my obsession; it’s just a physical truth of proportionate livng and working where Man is no longer detached from the hunt, the chase, the roaming prairies of the West. This is something I’m quite into, not “obsessed”, as it’s a Western staple - see Americana Denizens of the Netherworld3 - that tied New York’s meat-packing districts to the Texas cowboy driving steers. The odors, the colors, noise of brutes and men. A type of visceral reality that makes you glad to be alive, not barely aware.

The government – or govt-by-management – tries to detach us from that and attach us to the wormdollar of consumption. I’m always reminded of Liza Minneli’s quote (Ch5 Alterantes5 Alternates 8) When rehearsing for the Lyceum they decamped to a building opposite to freshen up, and discovered it was a hooker hotel. “This is life – I love it!” These are the two aspects to living – one is ordered, gentrified (Apollo); the other is disordered, wild, lusty and innate (Dionysus). To have one without the other is a recipe for madness and disproportionate living, psychotic ego-lust.

We no longer as a rule live in proportionate space of the physical human figure (grace), and so there is no meaning (epistemology). Meaning is tied to the cycle of life because that’s the way it is. Look at the picture. Once you have figurative meaning, then you can maybe do some tidying up, gentrifying, dwellings of status and taste

Caiazzo lived in a low, sprawling house in the river district of Custom Point, a new-style house, not one of the old half-fortresses. Rathe ignored the discreet alley that led to the trades’ entrance and instead climbed the three broad steps that led to the main door. They were freshly washed, to, he noticed, as he let the striker fall, not just swept. (Point of Hopes, page 130)

But meaning always has a dark and dingy side to it, quite often what you see in heroic fantasy images. CL Moore’s Martian descriptions are just as dingy as Howard’s Hyborian ones. They are both dealing in natural physical meaning, something which the modern world tries to do without.

That is why I’m so down on Musk. Because he doesn’t care for the simple rhythms and basic balance of the cycles of life that Man is part of. He (“they”) only think in terms of a human head that is detached from reality (via AI/VR) and attached to unreality (AI/VR). It’s a completely meaningless future.

The future “they” are preparing for us has no sense of natural balance; neither life nor death, just exisitence whether it’s Earth or Mars, or the girl on the moon. There’s a running theme in CL Moore of Northwest struggling manfully against vampires of the soul. Femme fatales are a speciality of the fragrant canal-zone. His inner core and purely instinctive sense of self have a way of saving his skin from devious machinations. He is a man of old Earth, the alien mystique cannot conquer him.

There is a darkness of the soul there, because life has the strength of darkness. In The Tree of Life, Northwest is about to be sacrificed to the tree of outlandish geometry, and his innermost spark, his iron core of primitive vitality, saves him. This might seem like pure fantasy because it’s the place where life contacts death.

We are not robots to be nurtured and cared for by AI-replicates and then discarded like worn-out transistors. We have a self-knowledge that ties us to Earth, to her inner rhythms, her lifecycles. Why else do you think it’s Northwest of Earth? Without the knowledge there is mere existence, death by boredom, the parallel future of Musk & Co. Why else do you think his company is Boring? It’s not a joke, it’s a fact. The future of facts cannot abide lifecycles because that is a feeling. The worms of the earth, the birds of the skies, tied by the hunt, by the harvest moon.

The basic balance involves sacrificial relationships.We find it through legend, in the scarifice of Iphigenia to Artemis – the huntress – to save the Greek fleet (Pictorial 18) It’s the theme of BWS’s Adastra in Africa (Tales of Faith 3)

The lifecycle of Man is his inner strength, his daemon. Boring Companies will build a flatland of pitiful weakness, psychic and physical. A limbo of lost souls eternally travelling the Styx in search of a terminus to plug into.

That is the future “they” are set on, and it is well-named. Know your enemy. Know Thoth Amon, ruler of serpents with the features of men.