“Destruction of the New by the Old”

Inspired by Howard’s “The Grey God Passes”, weird-wild hauntings cast dense eerie shadows over the carven heads of Mount Rushmore. The words of Howard echo across time. The ancient gods retreat, but in their retreat is destruction

It’s startling how closely the Cyclan of EC Tubb’s Dumarest saga resemble our bloodless friends of the DNA persuasion. Reason gives them pleasure, and that is their only pleasure. The big question is, why does this galaxy-spanning cyber-consciousness always seem to be on the losing side to the ruthless animal cunning of Dumarest, in his quest for the true Earth?

I was thinking about this while reading Eye of the Zodiac (#13) which happens to have a spine-tinglingly classic conclusion in the pulp tradition. 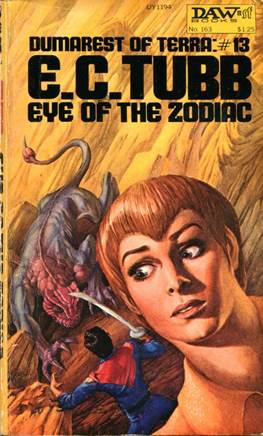 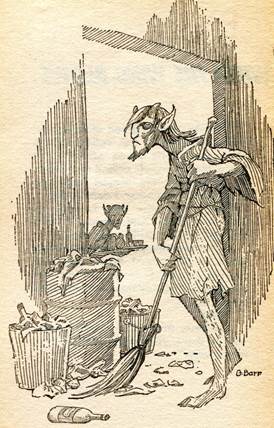 Not only does the heroine get defrocked as a man-hating spitting fury, but Dumarest beats a seemingly perfect logical trap with a mixture of brutal directness and inspiration. Logic may appear to be clever but lacks the clear and present inspiration of Apollo, which is the crystallization of thought. Inspiration, combined with animal cunning and litheness will defeat a machine of logic; that is the lesson of this sequence (the affinity-twin originates from #4, Kalin, whose secret the Cyclan desire, see CH 1)

Dumarest moved with a sudden release of energy, crossing the distance between them before the other realized what he intended, the cyber’s hand lifting, touching the syringe now buried in his neck. “No! You –“ “Have solved the problem,” said Dumarest harshly. “Think about it, cyber – if you can!”

..Hsi looked at his hands..His eyes were empty, vacuous, the blank windows of a deserted house. From his lips came a thin drone. “Odo wants..give Odo..Odo good..”

Logic is essentially a closed system which can easily become meaningless (insane). Yes, logic can be indispensable, as with DNA but no; development is illogical. It simply “borrows from logic” (Corneille, Pictorial 2). Now the powers that be seem to be attempting to make of DNA a closed system of logic. Why? Because it could be we live in such a system.

Back in the day, I used to watch The Waltons, and you wonder if those types of guys are now the losers in a world of Walmarts? Instead of the romance of blood and soil, dirty excitement and some action we get a lot of queueing. It’s the idea of a world that is composed of reason (marketing, big business) and pleasure (goods) but with no psychic strength a la Waltons.

This system can be run by computers and, ultimately, AIs as a closed logical system of reason applied to pleasure. How do you defeat this system? By taking a cue from Dumarest and getting very physical, taking inspiration from Mother Nature in her splendid tapestry of mannerisms and modes of life. One needs inspiration, to crystalize ideas and gain iconic strength from the forms of nature. The physicality of nature is a powerful Dionysian influence, to remind us we don’t need to live in a world of reason and pleasure when the great natural mystery is out there.

It’s not just the circles and stones we have forgotten but also, as a family, how to enjoy our surroundings. Great though many of them are, Scotland is not just dank castles, museums, souvenir shops, cafes, restaurants and rain..

And there are many enchanting standing stones and eerie monoliths to visit whose power we will never really comprehend.. (Donald Macleod,Sunday Post)

Macleod seems to have been struck by the power of this ancient mystery, the imprecision or vagueness of an original landscape of stone, water, earth. Something that is not accessible to scientific measurement, a suggestive power that is primitive, psychic. Macleaod describes “the surrounding oak trees leaning towards the stones” (Croft Moraig). Poetic licence or something in the surroundings? You could say the same about other things, such as the age old lore of the yew.

We observe things in nature. If I see a dog that has a dog-manner, or a seagull that has a seagull manner, then that’s what’s there. If there are weird and eerie things then likewise that’s what you see. What are the precise relationships between stone, water, earth (fungi)? Yes, but what if it’s not precise? We live in a world of precision and, more than that, a copy, a precise copy.

People with big heads like precision because it is easy to apply logical reasoning – a classical definition of a closed system. A labyrinth that is only a pseudo-reality. You’ve only got to listen to Dawkins’ inanities to realize they are so sure of themselves precisely because their terminology is so precise! The same applies to any logical system, actually. The very fact that it’s precise closes it off from reality. Reason operating without the clarity of inspiration (Apollo).

Apollo cannot be divorced from the inspiration of nature, and the psychic roots of living that we have left behind. Apollo is not simply reason (see the False Apollo); he is dream, vision, the stuff of myth. It goes back to the Cyclan, whose only pleasure is reason. The deathforce (see Korvac Weird 8). A closed system that forever chases itself to achieve perfect order, and the death of psyche.

Hubris and ego-lust will prove their own undoing as their abject weakness of psyche starves them of moral oxygen and they crumble to dust. Strength is a protection here; the protection of Mother Earth; the protection of the hero for his lady. This is one of Dumarest’s constant traits in his endless quest for the true Earth.

Pecula leaned forward in her chair, looking at the accused. He stood tall and calm, his face impassive, the lines and planes firm and strong. There was a strength about him, a hard determination which appealed to her femininity. (Jack of Swords, page 24)

There is a metaphorical aspect to this sense of moral and physical strength, since women are there to be protected and not just pursued. There is an odd sense in our corporate world that the Freudian pleasure syndrome is the only rationale and behaviour is overtly predatory. Corporations exist in EC Tubb’s universe, but in many respects it resembles medieval city-states set on a galactic stage. Family intrigues, status and rivalry are the dominant themes, traits bordering on Hyborian. It is intriguing how pulps continually go back to the old modes as if instinctively wary of the modern pleasure syndrome.

That brings in romance; the idea of strength as an underlying principle of action. Not reason, not pleasure. It’s the enfeeblement of humanity when pleasure is the sole operative principle. Basically, Dumarest resonates strength and this brings him luck. Women of high standing find he is what they have been looking for in their intrigues with rival factions.

So, there’s a pretty strong resemblance to Conan, the romantic hero who is somewhat broody, introspective and super-fast, lithe, ferocious in action (see CH1: Howard’s fantasy has gentle aspects I feel). Carrying on the metaphorical idea, has the real Earth Dumarest is looking for men who take up strong pursuits like riding horses and driving cattle? The chief virtue is strength of mind and body, and not reason. Women are respected and and are not viewed primarily as pleasure objects.

That world inevitably has a psychic strength, and the meaning of figures in a landscape is much more apparent than in a corporate system (Weird 11). You could say it’s a more bilateral world, but women, Indians and blacks historically were able to be cowboys in the rancher-milieux. A corporate system achieves two things, reason and pleasure, but it cannot achieve psychic strength. You could say psychic strength is the entire history of classical Greece; also the romance and allure of pulps; also the comics before (see Pictorial 3) 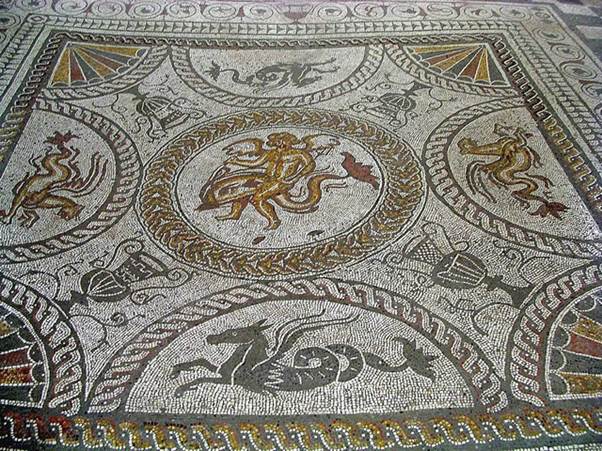 Here we have a Roman mosaic from Fishbourne Palace. The obvious observation is the inspiration of the forms of nature. A good modern example of the complete contrary is Attenborough’s “Life on Earth” (BBC) which assaults us with multifarious natural forms. Whereas the ancient mosaic is a comfort and a protection (a symbolic offering), “Life on Earth” is the product of pure reason, and is designed to give pleasure. Attenbore is well-named as a series that purports to be reality is lacking in vision, psyche, dream.

How is it possible that multitudinous levels of filming can be so desolate? The answer is in there. The magic of nature is a product of happenstance and occurrence. The Attenbore team apply clinical techniques to forensically get what they want so, ok, you get it without the vision or psyche. After all, living things are quite unconscious, instinctive beings. You cannot see their psyche but it is there in a dream. If you are deprived of the dream and its protective, symbolic effects, life is a lot less comforting. This saps our strength and is another example of the enfeebling of mankind.

It’s all very well to say nature is predatory but it’s like the CC Beck quote (Cosmic Curmudgeon) about Sherlock Holmes falling off a cliff and showing him being eaten by worms. Nature is many things and all a film is doing is copying something very accurately. That doesn’t make it reality since hypothetically you could copy every event on Earth and you’d just have a lot of information. What makes things real is if you observe them by sheer happenstance and are overjoyed by the playful frolicking of a dolphin offshore.

The forensic approach to nature is not real just because it’s accurate. It’s a forensically clinical fix that is supposed to hit our pleasure zones. It’s reason applied to pleasure as with other great rationalists like Dawkins (Darwin?) Whether or not it’s literally real, it weakens us psychically and diverts our gaze from the simple truth of flowing symmetries and charming proportions found in Roman mosaics.

Am I saying that the more factual something is, the less real it is (Weird 11)? This really goes back to Darwin’s forensic approach to the “battle” of natural things for dominance. You can say there is a battle going on, but there are also flowing symmetries and charming proportions. There is a charm to natural things which comes from poise, from pausing to survey their surroundings, from the symmetries of herds and flocks. Essentially, this is life in the moment which is athletic and full of grace. None of that is actually Darwinian since it’s just the act of living.

What a Roman mosaic captures is the act of living, the thoughtless abandon. Darwinism doesn’t consider grace and symmetries and proportion which is all the classical era did. Even given the tendency for struggle in nature it’s still a lie if these facets are absent. It’s a non-sequitur because there isn’t a struggle for existence; there is first the birth of life in its perfect indecision, then there’s a struggle to sustain that life. 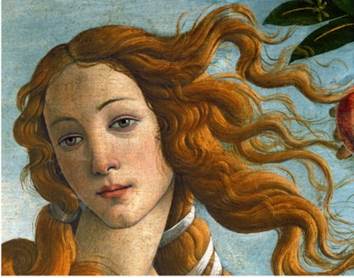 Forensic Darwinism is only ever about the struggle which is a complete non-sequitur. Go back to look at Burne Hogarth’s anatomical studies (Pictorial 1); athleticism and dynamism are not a struggle, they’re a sign of perfection in Man and beast (fortune). Our rationalist foes cannot understand this train of thought, and so we have this sort of transformative maze of logic that gives us the struggle of corporations in a Darwinian-verse. It’s predatory without the delicacy and charm of natural form.

It’s the equivalent of the DNA Dragon that seeks a phallus-like domination without the athletic grace and nimbleness of the warrior. The human figure is the measure of all things simply in an athletic sense, and in the psychic sense of affinity with nature.

It’s clear there’s a womblike reality of the psyche, unconscious and irrational, along with the moon and other feminine symbols of fantastic power. The “leprous moon” of Joiry – see upcoming on CL Moore’s Jirel of Joiry.