Inspired by Noto’s “Red Lace”, the wood-stone temple of blood plays host to a DNA Dragon from the future whose anaemic visage recoils from the blood-encased stronghold. He begs a passing jester for the way out. “Certainly sire, the way out is blood”, and neatly lops off his head with a razor-sharp scimitar. In the background Red Sonja and Conan, rival bounty-hunters for the arch-future fugitive, laugh ironically

The world of precision (prison) is not a fortunate one. The way out is 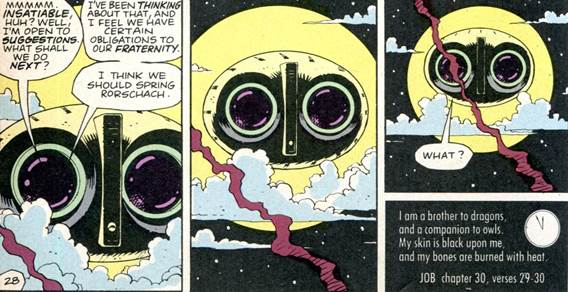 The comic book perspective of Hogarthian heroes who lust with body and soul for an ideal that humdrum normality conspires against was never so perfectly brought to life as in the Moore/Gibbons Watchmen.

Without lust the universe of idealism is a sorry sham. The tarnishing of this great American (with British help) artform began with Mark Millar’s Ultimates (see CH6) and has been perfected by Marvel Studios. The hero is not the establishment; they represent something more mystical of nationhood, the very creed of noble litheness that broke America free of repressive regimes. This creed of lusty abandon has its own violent history, needless to say but, whatever else can be said, I think it’s still true we have to

SING OUR OWN SONG

Yes, because the hero comes from a dysfunctional family of oddballs, basically, who band together in a micro-society which cannot be browbeaten, who have love affairs, who leave on a whim. This creed reached its apex in Avengers 92-98, the Kree/Skrull war.

How can one compare this space-spanning saga of government persecution of its heroes and infiltration by alien scouts, a renegade Nick Fury aiding the Avengers’ lone defiance, with the relegation to state-machinery of the films?

America in comics is not vaunted for its state-machinery, it’s vaunted for its mighty men and women who are fortunate to be free, its superheroes. The superhero fights for freedom, which is an ideal, an ideal of psychic and physical power of one individual man and woman. It is what Diana Prince represents, what Captain America and Thor represent, and it is not government. It is a tension, almost the opposite of big government. The characters are iconic and a law unto themselves. 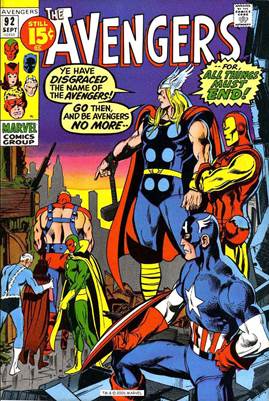 The films unfortunately so not consider the meaning and power of individual icons, being mainly concerned with the reasoning of their complex plots and obligatory banter. Yes, but, without meaning and power you have the usual mix of reason and pleasure – it’s a sham, a shallow capitulation to the market.

The meaning of an icon is that he is above the fray of governmental entities and represents something almost mystical. In the comics, this even applies to Fury, who is nominal head of a governmental agency. The hero cannot be subsumed or he is nothing. 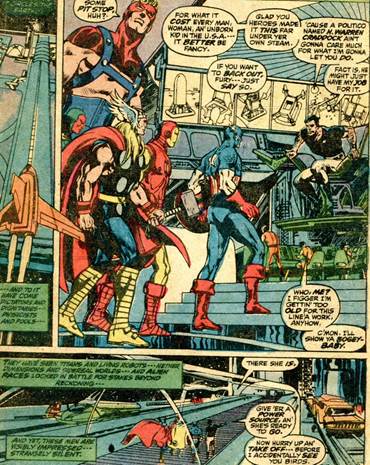 In the modern world – and in Marvel Studios – it is often assumed that everything is precise, linear, logical. That is the world according to reason and not according to iconic powers. Icons are not reasonable; they are fortunate forces; they have risen into being like an owl or a wolverine. Their power is that they have super litheness and grace and they speak for themselves only.

Roy Thomas captures this dysfunctional family aspect perfectly; and it’s not a case of banter. For one thing, the Vision is in love with Wanda and allows lust to cloud his reasoning faculty, endangering his teammates. 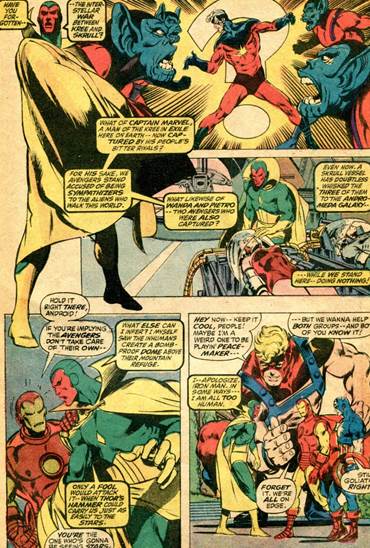 Love, death, lust, duty.. these are the stuff of sagas; the fate of icons is written in the stars because they are fortunate beings. That is their meaning, and it is the meaning of an owl; without that meaning, how would we have the symbolism of heraldry? A symbol is not precise, linear or logical; it is just a fortunate occurrence that signifies wisdom (owl) or opposites (snake).

I know this is gonna upset our rationalist friends who think precision is everything but, if icons had no universal meaning, what would be the point of reading Watchmen? The owl has an a priori meaning; if you don’t think that, fine and dandy. That is its appearance, and it is a thing of nature, of the universe. If you don’t believe in any of those things then just slink back to your den of iniquity. We, the people, are taking back what is ours; the earth, our holy mountain be restored.

No, there is no reasoning market here; Buffy has a manner of delivery that is well-worn. Manner is a personal style that draws you in with its lilting tones, a mythos in verse. I was walking down the road just now and noticed the dainty paws of the dog ahead, so cute and individually placed. Each species has a manner, and each individual member of the species. Old pop-music has interesting manners, if you take Marvin Gaye’s mix of thrumming erotica and introspective protest (CH 5). Style and content, the stuff of psyche.

Unfortunately, this type of power over the airwaves seems to have been replaced by a steady sapping of psychic strength by the banality of sexual refrains. We are back in the boring world of reason (marketing) and pleasure (sex). What is power? It is nothing precise or reasonable. It is psyche or personality. It is the very thing that the ego-monsters seek to extinguish from their definition of life, and yet it is the only thing that makes life worth living.

The iconic strength of living things, their fortunate natures, the tension of opposites.. that iconic world is being sapped by the siren call of reason (DNA) and pleasure – the pleasure that one gains by the action of reason on DNA. The banality is profound since pleasure is nothing without psyche, personality, manners.

It’s all a complete non-sequitur. We first want to be fortunate individuals in a fortunate universe. Figures in a landscape, meaning (Weird 11). The universe of psychic power and meaning is denied by those who worship at the shrine of reason and pleasure. Their ego-lust knows no bounds and is the fiend that roars words of insolent banality heard so often from the lips of the bloodless son-of-DNA Dawkins.

Bloodless because his den of iniquity knows nothing of iconic ferocity, the personality and personal manner of beast and fowl, all are as nothing to the anaemic ego-lust seemingly ignorant of the things that give life meaning. The pulsing of blood, dancing round the totem pole of power, chants of ritual round and round. These things of personal psyche don’t exist; the fortunate life doesn’t exist; the protection of Mother Nature doesn’t exist.

In their anaemic self-satisfaction only idiot reason exists; a form of psychic weakness that saps us, “nothing but another day”. The drug gives us pleasure (cure), but what use that if our link with life is lost? If you live in the land of reason and pleasure your psyche will be mortally weakened, reality will be pseudo and sex will be proxy. This is the fearful weakness at the heart of an ego-lust that that denies instinctive power, the casual grace of Dionysus.

Dionysus springs from nature that is empowered by the seasons, that dies and lives. Our anaemic friends know no morbidity; have you ever noticed the way Dawkins speaks? Everything is positive, a realm of eternal optimism. There can be no room for pessimism where the eternal life of DNA is concerned. Except it’s a fake world of reason applied to pleasure with no sense of the eternal psyche – our link to nature, to the seasons, to rebirth. The classical world of gaiety and abandon. In the eternal world of DNA there can be no gaiety because there is no pulsing blood, no rich loam of earth, no physical and spiritual presence.

It’s the equivalent of a shallow marketing device that you would use to sell a Marvel Studios film. You admit to some pleasure, but the psychic power and meaning of the iconic originals is sadly lacking. An original is not a copy and that is the fatal flaw at the heart of evangelists of the DNA-machine. We are originals and the earth is ours.