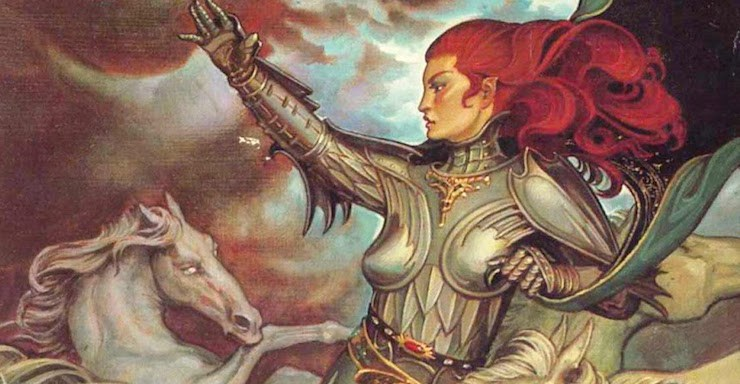 Indian Summer and frocks of coarse fabric (Alternates 7, And God Created) – reactionary forces of the old west that deviate from corporate desolation. We are not there to survive insane lusts of phallo-centric worshippers of some alpha male dream. We are there to defend with grace and ease of movement exotic gypsy women of animal carnality who frequent field and paddock. Women are harvesters and the harbingers of aura, so you could say natural aura takes the place of insane order!  Women bring forth life with carefree abandon.

The feminine event, birth. Fairytales take the place of an internal logic that echoes that of the brain. But hero-worship of the brain is mere incest, a closed-world, inward-bound, weak, feeble-minded.

“Those who built this place were clever. The chambers, the passages, all follow a mathematical precision designed to confuse.” (Dumarest, Jack of Swords, page 114)

Women of taste admire athletic bodies and introspective psyches. Style and content; Apollonian idealism and Dionysian urges. Fairytales or heroic fantasies are born of the taste for adventure, for figures in surroundings of rare distinction and picturesque grandeur.

Like Brundage before, BWS honed his style to distil meaning from images of power. Where Brundage is decadent drapery and dark vastness, BWS crystallizes art-deco motifs into instants of significance. The meaning of each is clear. That without figures in evocative surroundings there is no a priori meaning to events and the world is confined to one of internal logic.

“I found everything the legends promised. Wealth beyond imagination, pleasure unexpected, the answers to all questions, the solution to all problems.. The rumors didn’t lie. Everything you could hope for is there, but at a price.”

Yet there is no logic in human form, there is dynamism and Dionysian lust. BWS’s female figure is the height of abandon, and similar remarks apply to Brundage. Both are masters of style and the suggestiveness of posture; their pictures carry messages of strength and submission, of blood and desire (And God Created).

Strong style; a world of internal logic has weak style because the psychic content is not there. The Dionysian lust that is redolent in images of litheness and chaste abandon. Our psyche and our lusts are refracted in images of the human figure. The style commands our attention  and we distil meaning from the disposition.

Howard, and his artistic interpreters, have rejected a civilization of brain-worship and turned back to the ideal of Man that is epitomised in style, psyche. This ideal, I say again, is born not made. The woman is the bearer, and women – whether warrior or victim – are indispensable to these pictures.

No less is the sorcerer, whose devious meaning as the pre-historic brain-worshipper of insane lusts. So, we have meaning born not of logic but of woman. The style of the pictures, the effeminate mannerisms of art-deco, give meaning and lustre that is not pure masculinity. I began to realize that in Dumarest, following Eye of the Zodiac  the Hobbesian struggle for existence begins to pall. “Another day, another knife in eye socket” (Iduma's Universe #21).

What Howard has, what Howard's illustrators Brundage, BWS (and Thorne) have, what CL Moore's Jirel of Joiry has, in very truth, is the feminine sensibility, manner, delicacy, lightness and gaiety of touch. It's not enough to be manly or to be a warrior born. Also needed is an original sense of artistry that in truth is womanly. Howard's heroism could not work in a Hobbesian world where all was struggle and the delicious artistry of nature's bounty was not a power and a feminine delight in its own right. Women who bear pottery with grace and distinction. The gay fluency of Greek pottery.

The basic question of Dumarest is, “What is the struggle about?” To find Earth, but what if he finds the selfsame Hobbesian struggle (as is the gist of Iduma's Universe)? This, it seems, is the pitiful trap of a universe of internal logic. The woman is the bearer, and there is no logic in birth (see Pictorial 4). Dionysian lust and the stylish artistry of figures of Apollonian descent are the true heirs of Weird Tales.

By plunging in to abysmal depths, Jirel accesses levels, perhaps of the human psyche, that are hidden to modern Man. She roams through coarse grass, misty marshland, encountering beautiful frogwomen and Byronic sadness. She is a herbivore again, a flying spectre, a Golden Eagle, a superpower of nature.

The three Weird Tales greats – CL Moore, Lovecraft, Howard – together pursued a course that put them at the other end of the universe to the collective idea that rational thought is correct. The collective rationale that gives us ease and comfort for life (if you call it that).

Man rejoins his ancestors as one of the superpowers of nature, donning iron greaves and tunic of coarse fibre, utilitarian for strength (see Wonder Woman And God Created). Jirel confronts demons in a gruesome iron-red vastness in order to gain the strength she needs to defeat her foe but, like Sonja in “Red Lace” (Alternates 3), her crystalline purity is like a fire that sanctifies her bodily form and caries her onward.

She dares revert to reptile in her quest for revenge. Rational thought cleanses the mind of any such archaic urges, yet the mind gets closer to the gates of hell. Psychotic lusts will out when the psyche is weak, and that is what rational thought is doing. Jirel, like the eagle above, soars on foot and tendon of steel, a dark avenger.

Again, obscurely, she had the feeling that in the peculiar angles of this shaft was neither up nor down. And for a long while the dizzy circling went on. (Jirel of Joiry, page 35)

The time has come to say that information, and particularly the linear information in Newtonian space, is a type of weakness that traps us, that saps our strength. It’s not an outright lie but it is a clever ruse to keep us safe and secure in a structure that limits our imaginations.

Jirel accesses deep levels of her unconscious and finds strength, joy, sadness. Her emotions of enigmatic vastness are hard to place. She is a reptile in some nameless cavern; she has the superpower of nature’s iconic forms; the stars are her destiny; her destiny is destruction.

You could take this a bit further, that Kali the goddess of destruction is a force of nature. That not everything is straight lines and rationality. That tangled webs and ambiguous places abound. The basic point is there are mathematical spaces which appeal to mathematical precision; and there are iconic forms which are things of power, startling rhythms.

We are the latter; voices have startling rhythms; the neigh of a galloping stallion. The throat is an ambiguous space; our bodies are full of ambiguous cavities (Pictorial 1). CL Moore captures that irrational strength and the same current runs throughWeird Tales. Being figurative, she and Howard have an ancient eroticism that is at once bestial and alluring.

In the modern world we are led into a world of Newtonian angles and DNA where we supposedly struggle for dominance. At the same time we are led out of an emblematic, womblike world that is simplicity and iconic strength. So which is true? The answer is strength is a classical virtue; what’s the future in weakness of psyche and spirit? What Jirel does is access a world of emotional strength that is a far cry from our one of pleasure and reason.

So many loves had blown lightly through her life before – how was she to know this surge of heady violence for what is was, until it was too late?  (Jirel of Joiry, page 42)

Jirel is also getting back to a place where proportion matters, and seemingly changes her own proportions plunging down the shaft to the dark kingdom. In an irrational world proportion matters above all, and the head is proportionate to the body (Weird 15) and the body has athletic grace and symmetry.

In a logical world these things basically don’t matter; the psyche is weak; the Thoth Amon head tells us what to do. We survive in a logical world but we are not born into an irrational world which is proportionate. Jirel’s superpower is emblematic of birth into a natural form; long legs in greaves of iron; torso in tunic of coarse cloth.

Jirel is not struggling to survive in a man’s world of no proportion and no figures and no landscape. She IS proportionate and she IS a figure in an ambiguous landscape. The world is first proportionate and then one can recognize symmetries, the meaning of figures, as in BWS’s “The Enchantment” (Weird 11).

Proportion and psychic strength are classical principles. There is no struggle involved; they are born of nature. Zeus metamorphosed into a bull and impregnated Europa (Weird 5). Emblematic form is not a struggle – classic error – it’s a birthright.