Psychological free space; style and eco-culture; revival of the past..blahblahblah. There has to be something a bit abstract about all this stuff, so it struck me a few cross-references back to earlier pages might be in order. The way I write is quite referential; CH 5 mentions the irrational introspective dreams and desires of Marvin Gaye and others. One thing the 60s had was psychological free space. The Gaye written Dancing In the Street for Martha and the Vandellas symbolises that.

Marvin Gaye you could say definitely was not gay, but the sound of Motown was definitively. The carefree street-sounds and sort of recitatives of neighbourhood happenings in Martha (as well as Gaye’s What’s Going On). Detroit, of course, was a city of grime and steel, the car-capital of the north.

Now, if you say 60s autos are macho-metallic symbols, pop by contrast is light, airy and heavy on femininity. 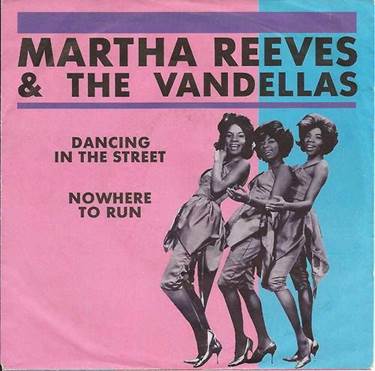 Marvin Gaye is macho enough, but the falsettos are something else. Has anyone noticed the Motown guitar sound has an industrial thrash? There’s a 60s Detroit culture there; I’m not saying it’s anything deliberate, just a haphazard effect of grime, steel, sleek city streets and beehive femininity.

To me, there is an unthinking simplicity to these songs that reflects the city; the mix of sleek streets and industrial grime.

Alternates 4 is talking about medieval courtly virelai and saying the psychological content has a rapport with the romance of the social milieu. So, why should 60s pop and 13th century rondo have any connection? Because they have a psychological content that reflects the milieu; because the milieu has a pungency. Because there is also a type of symbolism there. The courtly music; the femininity; the towering castles of the air; the pounding furnaces of heavy steel; the pounding hooves of war-horses.

In your mind’s eye the music evokes a wider meta-imagery. These are terms I’ve used throughout, and it applies as much to 13th century Europe as to 60s America. The psyche and the inner life reflect the outer. The inner urge, the carnality, reflect the outer vision. There are two things going on; Dionysus and Apollo.

What we’re talking about are symbols that come out of the psyche, that come out of unconscious urges and are irrational. The logic of desire. All this is psychological content which “they” (the alien overlords from They Live!) will replace with a maze of facts. As I said of the medieval castle (Alternates 8) the order is not designed to replace irrational urges, it’s there to harmonise them.

That is a true Apollonian vision, not real, a symbol. The grime and groping of irrational urges can’t be replaced without ushering in an age undreamt of by Bezos & Co, an age of crazed, swizzle-eyed logicians – spawn of Thoth Amon (CH 4) Because the chivalrous age of the castle was not a material order, it was an order of the psyche, the feminine ideal, the macho stronghold.

As we know of these feminine symbols, be it Bardot or Lavigne (Wild Horses), they have a tendency to be louche, if not filthy. Their wilful natures reflect the pungency of the vision. If you recall, I said the order of a medieval castle is there to harmonise irrational urges of the body. So you see the romance of those scenes have something in common. In a world of Apollonian vision there is a symbolism of femininity and masculinity. It’s not a material order, and actually there can be a lot of decrepitude (I tend to think Monty Python & the Holy Grail got it about right!) Images of fairy tales or of the Motown fairy tale; reflecting the pungency of a milieu that is prone to decay, as actually Detroit did.

That’s romance; it’s not all bright lights and materialism but it is a world of symbols that mean something; simplicity, carnality, primeval male and female. Primeval symbols can’t be told what to do, think or say. They’re products of vision and not fact. The psyche.

Now, CH 4 talks about a psychosis that can exist behind a world of fact. What I mean is that a serious world of talking-heads and egocentrics can hide a phantasmagoric psychosis. It exists in the unconscious so can’t be seen, but can still exert a tyrannical influence.

What this phantasmagoria could be is anyone’s guess; it could have an abnormally large head and, as I suggested, a serpent’s body (Thoth Amon, the ram’s head sorcerer from REH and Sprague de Camp). Even if you live in a world of fact it could still be fantastical because of the influence of the subconscious.

The basic problem of facts is there is no sense of harmonising irrational urges, which is what an Apollonian vison does. The chivalrous age of the knights; the grime and grot of the castle. As I said in Alternates 4 , the eco-culture comes first, facts are matched to the eco-culture. You might say there’d be a lot less facts; I’d say there are an infinite number and they lose their meaning. See Alternates 5 for tribal “facts”.

It comes down to what type of future you want. If you want one of ritual formula, of DNA run by algorithms, then ok (Alternates 8). If you want a vision, symbols that are free of formula and have grace and style, something of rhyme and harmony, that’s something else.

Throughout Alternates I’ve alluded to American Flagg!  (always with a ©). The alternate future envisaged will only suit a certain type; they’d tend to be unserious, often with a brutal style, introspective. Seriousness is the bane of Americana (CH 10). Brute style, though, is effective.

In pioneer settlements and tribal Indian history, unconscious imagery reflects the visible meta-imagery; the eco-culture has a savage style (Alternates 7).