Modern politicians or “potentates” seem – to a man and woman – to have forgotten Jean Jacques Rousseau’s link with the sensual that entails a return to romance and spiritual purity. Almost to the rampant voluptuousness and blood-red symbolism of Noto, that brings to mind Spenser’s pure soul (see Aspects 3, Faerie Queen, the knight, Red Sonja’s unicorn).

The pure soul unites with the dragon and achieves strength and determination, a type of reality that is lost to our enfeebled “potentates” since it is a form of power in awareness – rhythmic being or ontology – in a figurative landscape bequeathed by the universe (meaning, epistemology).

In “Worms of the Earth”, Bran Mak Morn is the pure soul who, though fearstruck, unites with the dragon – or worm – in an ancient place that appears to resemble Stonehenge, in order to obtain the head of Titus Sulla. In places of power, death becomes life and so the ancient monuments are real, not a product of reason and pleasure alone. In Korvac (Weird 8) absolute order becomes death. In Euripides (Weird 10) pure social order becomes depraved bloodlust. A world of pure planning is death because it does not recognize unconscious lusts which can aspire to depravity.

It is a world of weakness and confused meanings. Patrick Woodroff’s 1972 Triptych, The Thousand Year roundabout,seems to touch on these themes (see Metamorphosis 2) 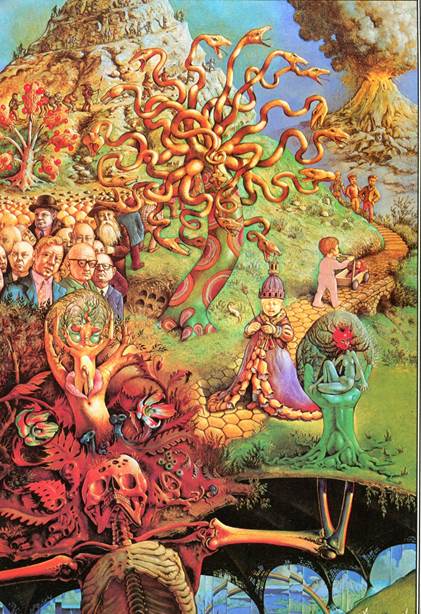 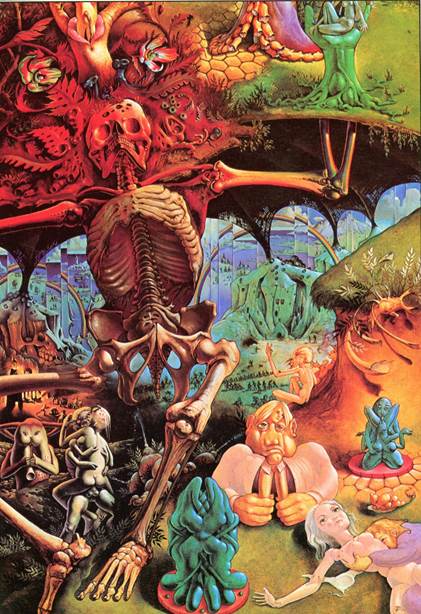 This panel is dark and idiosyncratic (later on the right panel is future-optimism) and you can trace a classical theme of regeneration. Nymphs and dryads spring fully-formed from the skeleton’s limbs; the snake tree self-regenerates. Most interesting is he uses the term “pseudo-landscapes “ that the skeleton is supporting through the earth.

And the windows of hell were papered over with pseudo-landscapes that gave empty reassurance to the condemned. Counterfeit love half hidden in the murk thrust lethargically to the rhythms of a depraved lust. (Mythopoeikon, 1976, page 52). The macabre mating-rituals might be his way of pointing to the hollowness at the (Apple) core of moderns? The “potentates” on left appear to be distinctly nonplussed; are they, perhaps, not potent but weaklings?

It’s certainly fantastically idiosyncratic, so maybe very apt. There is a sort of sense of enclosure so that lustiness cannot spread its wings as is its birthright. We are enclosed by order but, actually, that is death and not life. Woodroffe calls the central figure “the death-escaper” (who he equates with Daedalus who flew out of the labyrinth).

In places of power, death becomes life. The Dionysian aspect of living cannot be denied without crushing the spirit of Man and that’s not gonna happen. We are part of a process, it has its melancholy aspects, its morbid vastness. We are part of it, in fact just as the South is part of the American vastness.

In New Orleans in June the air is heavy with sex and death, not violent death but death by decay, overripeness, rotting, death by drowning, suffocation, fever of unknown etiology. The place is physically dark, dark like the negative of a photograph, dark like an x-ray: the atmosphere absorbs its own light, never reflects light but sucks it in until random objects glow with a morbid luminescence. (Joan Didion, South and West)

This is a world beyond politics and simply the lust for life and experience bequeathed by the soul of the universe. These experiences are going to be steadily dismantled by the powers that be in their idiotic quest for pure order. The time has come to cut-off the head of the dragon, those potentates who – if you look at Woodroffe’s painting – seem to be mere infestations in the scheme of things whose loss would go practically unnoticed, whose psychosis of pleasure and machine-intelligence (Weird 7, 8) diverts attention from all the melancholy aspects so familiar to readers of Howard. Politicians spell doom to the man-of-action, as Howard seemed to foretell and rage against in the 30s.

Like the Rome of revelations, they’ve fallen into a trap where conflict with the free unconscious will of Man must occur (Aspects 3).

In “Worms of the Earth”, Bran faces macabre sights in dank pits ‘neath timelost menhirs that would sunder the soul of lesser mortals. But he is pure of spirit and has fortified his soul by riding through wild and timelost marshes and becoming one with their immortal vastness.

King Bran symbolically unites with the dragon in the shape of the witch of dagon-moor, and faces the pits of hell unbowed. His spirit contains multitudes (Whitman). The Roman has his own stamina and standing but is from a civilization of planners and civil servants. To him the worms are not just sinister and macabre, they contradict a universe of social order. He is not evil, but has come into conflict with an unconscious lust that aspires to depravity. He is undone.

Those who hide this depravity in an enfeebled order are viler than the foulest pits of hell, and now it’s over to Frank