The sense of “epic” is something that is sometimes found in pulps and comics when it is almost de facto not found in modern literature. Why is that? I think the underlying reason is that an epic is not progressive. By origin it’s a song-cycle played on a lyre, it circles like storm currents, it doesn’t progress, it’s “Homeric”.

The effect of an epic is almost clichéd; it’s the same old same old, the sense of déjà vu, love, death, revival, spring and back again to autumn. Pulp tales tend to be circular, a magic circle of warriors dancing, not progressive.

An oft-asked question is what Howard might have written had he lived. One possibility is it would have been same old same old. One reason to think that is that Howard wasn’t progressive; if you are weaving a pulp fantasy you are simply whirling around on a planetary adventure.

I say “planetary” because there’s a resemblance between fantasy and sf pulps. Planets in ERB are savage and primordial; the same goes for Alex Raymond’s Flash Gordon. Howard of course wrote Almuric. What attracts artists to pulp is fantasies that take place in totemic nature, heroic or sf, the individual against the primordial, Man in his original essence.

If this was Howard’s forte, not progression, there’s no reason why he wouldn’t have gone on adding rich threads to the yarn. Pulp writing has its poetic sensibility – Howard more than any – and I think it has a lot in common with an epic poem. This is evident in series where the hero encounters similar challenges, alone against the universe, facing death and love in a primordial struggle. The women he encounters are eternal, like Belit in “Queen of the Black Coast”, figures as much of primordial nature as of femininity.

In that sense, their imagery is very comic book-like. I found that out the other day when I discovered the “Dumarest” series by EC Tubb from the 70s. The French obviously cottoned on, and Bilal’s illustrations are worthy of note.

“His reputation for fast-moving and colourful SF writing is unmatched by anyone in Britain.” 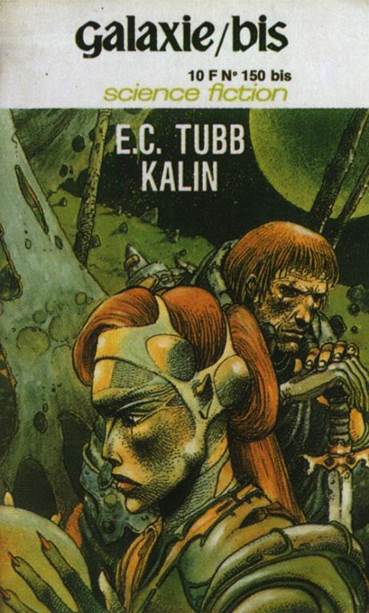 Dumarest is a space opera that reads like sword-and-sorcery. The hero is from fabled Earth – lost in space – a superman of fabled reflexes and hard-honed intellect. On every planet he encounters a woman who is attracted to this blend of instinct and intellect, and becomes their champion – usually in a fighting arena – in a planetary feud. The fantastic sense of repetition is very comic book, and elicits images from Bilal that are a mixture of déjà vu and unconscious, dreamlike power.

Pulps are often dismissed for this sense of déjà vu, but this is what draws artists to them. For artists deal in unconscious imagery; the hero is inside nature and nature is a festering whirlpool of fascinating forms. The hero is isolated because with isolation comes fortitude and awareness (like a swift on the wing). This is a super-common facet of pulp literature and comics – think of the classic “Metamorphosis” issue of Starlin’s Captain Marvel (#29 1975,). The hero in the vast universe, an original symbol, gaining strength from the darkness that surrounds them. This very Dionysian darkness is the existential reality that sustains the hero on his quest for Earth. For it is borne of truth, like a harvest of daffodils or a field of stars strewn across space.

In Kalin, a planet-spanning love story that is Tubb’s equivalent of “Queen of the Black Coast”, the love-match is doomed from the start as Kalin – red-maned heir of a dying dynasty – is the affinity twin of an ancient, diseased crone. Love is stronger than age and disease, though, and when Mede the cyber kills her..

“Earl, my darling! Earl!” The signal lamp changed from green to red..

Strength blossomed from his fury. This man had killed Kalin! This thing had again robbed him of happiness! He heaved the scarlet figure into the air, ran from the room to the patio, to where the pillars looked down onto the sea and rocks below. For a moment he stood poised, the weight of the cyber struggling in his hands, then he stepped forward and threw the scarlet figure over the edge.

And watched as the sea cleaned the red of blood and fabric from the granite teeth studding the shore. (Arrow, page 188)

To me, these types of passages have a Howardesque grittiness and bloodiness – even if he’s no Howard, he does his best. And the women are no femme fatales; even if not warrior-women in the Howard-mold, they are desperate women usually with power and prestige who love and hate with equal abandon, and Dumarest is the champion they long for. The red-cowled Cyclan, like a spreading scarlet blot, are the sci-fi equivalent of horned necromancers. 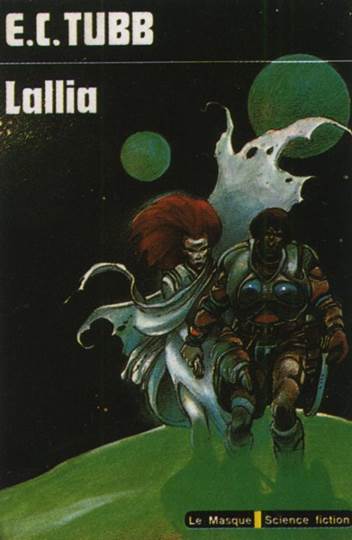 In Lallia, they approach the time-lost shrine of “the guardian” in a passage that could come from Howard’s myth-encrusted prose.

A wide avenue stretched before them, floored with soft, close-cropped grass and flanked by the slender boles of soaring trees. They reared like columns, a tuft of branches high overhead fanning to meet and form a natural arch through which streamed the ruby light of the sun. (page 132)

Lallia is slain by an agent of the Cyclan, and Dumarest matches his native cunning and instinct against seemingly invincible strength and egocentric confidence. He wins, and the quest continues..

It would be a long journey and there would be too much time to remember what might have been. Of a girl with lustrous black tresses, the pressure of her arms, the promise of her body, the future they would now never share.

“That’s all right then,” said the handler. “Just you?”

Alone in the Dionysian vastness. But this is the same quality that attracts women, the gentleness, the fortitude, the swift ferocity. You’re saying there’s no gentleness in Howard? You’d be surprised!

“The best superheroes, though strong and ruthless, usually have a subsidiary gentleness built in” – Patrick Woodroffe in Mythopoeikon, page 110 (Dragon’s World 1976) 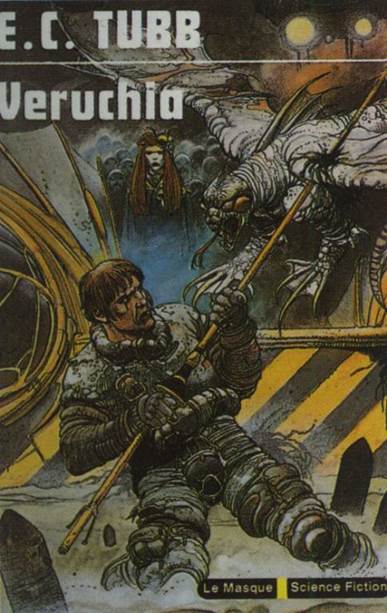