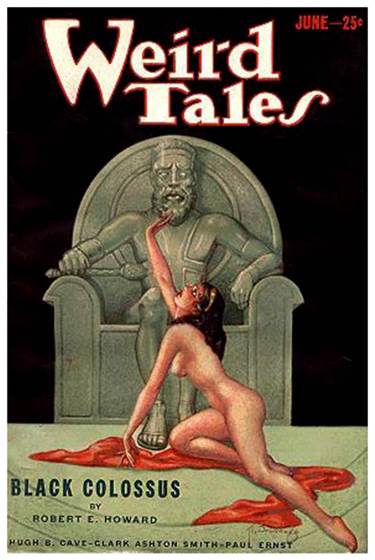 
The subject of Margaret Brundage’s cover to Weird Tales is monumental, as princes Tascela pays homage to the statue of Mitra, the mystery beyond the human.

One can see in pulp art a flowering of the id, and the sensuous, flowery style connects the human figure to nature with sinuous lines and vibrant, poster-like colors.

What attracts artists to pulp fantasy is something primitive, an original symbol. The hero is solitary against an unconscious vastness. It’s a suppression of the ego, and a recognition of the id. To me, this is heroic fantasy, and you are reading in Dumarest Howardesque influence on pulps.

Howard has a sense of oneness in the closeness of love and death (“Queen of the Black Coast”).

In one mad instant she was there—a tense white shape, vibrant with love fierce as a she-panther's. The dazed Cimmerian saw between him and the onrushing death, her lithe figure, shimmering like ivory beneath the moon..

A sense of recurring time, repetitive vistas, daybreak, sunrise. Eternal recurrence is something Nietzsche adhered to. REH has a poem with the line, "We count not time" - in other words it's recurring.

..So passed the Queen of the Black Coast, and leaning on his red-stained sword, Conan stood silently until the red glow had faded far out in the blue hazes and dawn splashed its rose and gold over the ocean.

BWS's 70s pictures, such as "The Enchantment", deal with death and recurrence. BWS says of his 70s barbarian-themed prints, “My pictures.. deal with the twisting of time and space, life and death and ultimate re Creation.” (GbP catalogue 1976).

The hero motif is a study in contrasts. He is an egotist who suppresses the ego, allowing in the flowing power of the id. Daphne, goddess of the laurel and regeneration. Artemis of the moon entwined with Apollo, her twin. The origin for this is probably Nietzsche to whom the Dionysian urge was at the root of classicism. He is the romantic-classicist par excellence. 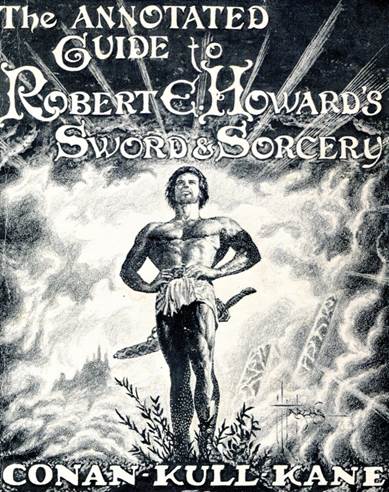 On the cover to The Annotated Guide, the hero stands atop a plantain, almost like it is his heraldic device (a la Plantagenet), symbolising totemic nature. Images which come from the unconscious are totemic and heraldic. Weird fantasy in general has a dreamlike reality that enables artists to employ a personal and eclectic symbolism.

“My work is where the eleventh and twentieth centuries meet; the images are practically heraldic.” – Barry Windsor-Smith, Dragon’s Dream, 1977. 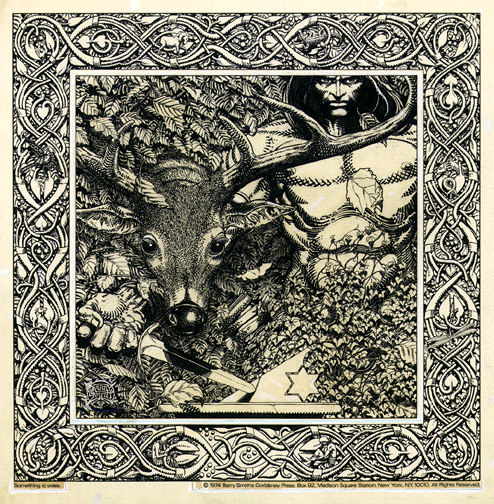 The sinuous lines of art-deco weave the hero into the gaiety and quiet solitude of nature. Like Rhine maidens and Lorelei of yore, garlands are spread as a bounty round the warrior. This mixture of gentleness and sternness is very medieval and, of course, another influence on BWS is the Pre-Raphaelites.

Echoes of Daphne, of the regenerative powers of nature, abound. The feminine side or Artemis, twin of Apollo (see BWS’s “Artemis and Apollo”). 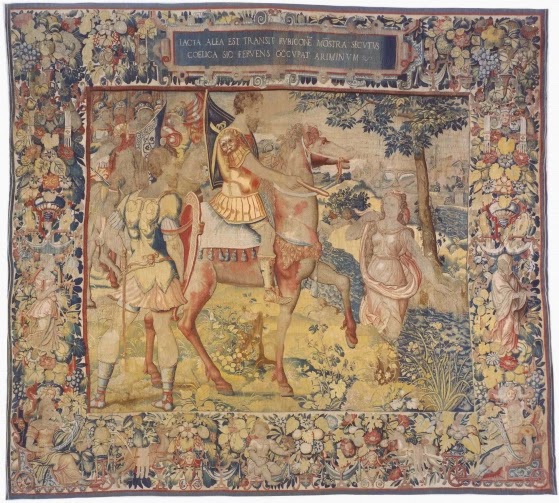 The id allows for classical motifs because it lets in the romantic soul, a Dionysian vastness. Those two sides of reality, Classical order and restraint, Romantic wildness and fury, are always good indications of what, if any, subject is present. Whereas modern art has almost nothing of either, pulp illustrators have at least some of both.