Denizens of the Netherworld 1

In a Randian universe, there is no self-sacrifice, for the reason that there can be no melancholy or decay, no abode of shades with which the hero does battle. In Greek myth the closeness of life and death is exemplified in the tragedy of Orpheus. He pursues Eurydice to the Underworld and charms the dog-headed Cerberus with his lyre, dancing down the rocky path to Hades till all are entranced, all save Pluto. Proserpina persuades him to grant Orpheus’s wish, on condition he does not look at her. Sadly, on the rocky route up Eurydice slips and Orpheus glances back.

The devious Pluto has some advantages as lord of the dark realm, and this aspect was brought out in Thor 128-130. Through gross deception, Hercules is lured into Hades and Thor must battle on his behalf. 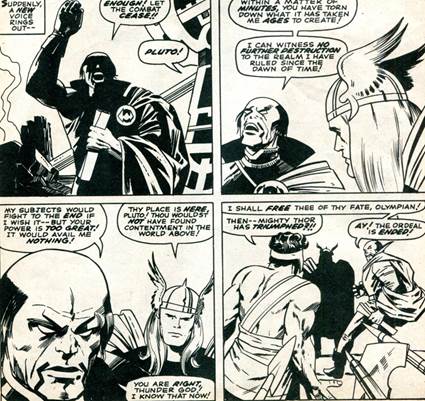 In the closing scene, Hercules and Thor are somewhat reminiscent of Lightray and Orion from New Gods. The frivolous demi-god is ever interested in revelry, while the Asgardian’s mind turns to the weightier subject of justice. 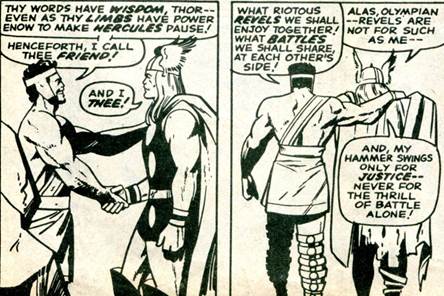 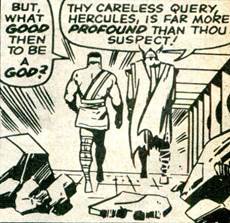 As I’ve been saying for awhile, the lifecycle has a melancholy aspect – and don’t forget even the Norse gods must finally face Ragnarok. The sombre spirit is ever-balanced, though, by the gaiety of the vine and frivolous Dionysus. These two aspects are present in Howard’s berserker spirit; the red haze of battle descending to laugh at mortal peril.

The subtleties of emotion, and the capacity for self-sacrifice belong to a universe where the closeness of life and death, the heroic act, are recognized. That is the nature of myth, and obviously of the heroic fantasy genre. The basic regenerative principle is present and, actually, is very apparent in some passages from Howard (say, Swords of Clontarf).

From that springs all the aspects of life that are light hearted; the boisterous revelry, the unthinking spirit of gay abandon. What can be tragic, as in Orpheus, has a double-edge to it and a capacity for regeneration, joyous abandon. The closeness between life and death can never occur in a Randian universe because it has no such unserious spirit. It cannot countenance melancholy, it has no room for frivolity. 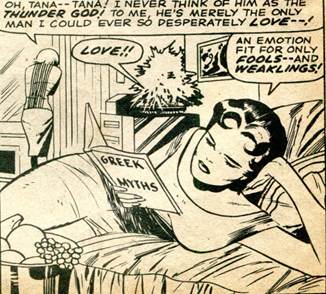 In its single-minded seriousness it resembles no less than the land of the Underworld, of Pluto. In Thor, he is given to realize his advantages therein.

Pluto’s advantages are being master of all he surveys; the soulless, joyless denizens of a limbolike province. He is able to accomplish much, yet cannot escape his labyrinthine lair. What that basically means is he cannot escape his own psychology, which is serious, labyrinthine, Machiavellian.  Now, here are two quotes I read following the Grenfell inferno, following the rehousing of victims in a development where some units go for £2 million.

It’s so unfair,” said one woman called Maria. “We paid a lot of money to live here, and we worked hard for it. Now these people are going to come along, and they won’t even be paying the service charge.”

Nick, who is paying £2,500 a month in rent for a one-bedroom ‘apartment’, announced that he was “very sad that people have lost their homes, but there are a lot of people here who have bought flats and will now see the values drop. It will degrade things. And it opens up a can of worms in the housing market.”

I guess you think that’s a bit naff? More than that it’s evidence of a weak psychology, a psychology that is serious, labyrinthine, Machiavellian. They are caught in a labyrinthine trap, which is the rational pursuit of idealism.

But, as we’ve seen, idealism can only exist where there is corruption and decay. Idealism is not reality, it’s appearance only and is forever intertwined with the vine and leaf of festive Dionysus. I’ve put this in various ways, if you check back to THTRB 1. The pursuit of a rational ideal is simply the pursuit of robotic grimness with no attachment to the symbolism, the abstraction, that springs forth from the soil of the earth.

Symbolism is built on very close associations and these are readily corruptible. The closeness of Daphne of the laurel to radiant Apollo, which you can read about in myth. The closeness that is an aspect of fertility, of renewal.

In Rand’s universe the “ideal” individual’s capacity for good is incorruptible; but this is merely a world of shades and robots. The classical world is completely corruptible and therefore has psychological interest. It can recognize primeval lust, forbidden fruits, hidden urges.

This is the Dream of Man, as common to the Garden of Eden as to Mycenae. It is built on very close associations between Man, beast, fruit, vine. In Thor, the Olympian pact Hercules is duped into signing cannot be cancelled. The contract is a form of words, a ritual use of language that dupes the recipient, and that is essentially the world we are living in (see Alternates 3). One of shades.

Except they don’t inhabit a particular abode, they are busy building over the world in the pursuit of idealism, the heirs of Roark. It occurs to me this subject has been covered before, by Henry David Thoreau in Walden (1854). A cabin in the woods. Psychological strength from the irrational. Yes, because psychological weakness breeds psychoses that can manifest in the unconscious.

This manifestation is the bull-headed bellow of a Minotaur – or the world-arching ram’s head horn of Thoth Amon - see CH 4. The madness of a fact-based world is seen not in their ritual formulations of language, but in their collective unconscious. The seemingly logical incantations are simply a cover for fantastical apparitions of the mind.

These apparitions of unbridled lust for power are just as real, yet they go unrecognized in our rational world. One must go back to 30s pulps to discover the psychological roots of the modern world-devouring daemon. This is merely the opposite side of reality, and logic recognizes no opposites – see CH 12 (3rd para below Thor) 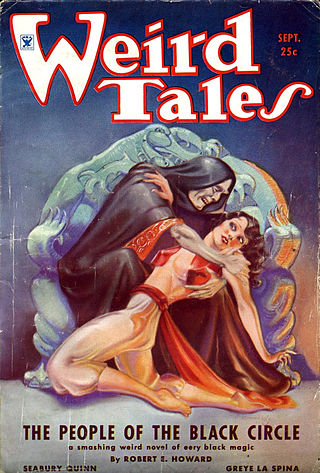 The world-devouring daemon is something which cannot recognize opposites, trapped in its labyrinthine mind. Rand’s is a “universe of logic and passion” (intro page 10, Ideal, NAL 2015) and cannot recognize close associations. This goes right down to the clay of the earth, the clay that constitutes the earth for the trees of the grove that encircles the classical ruin (THTRB 1 above Yggdrasil).

I know there must be those who are sceptical at these constant refrains of seeming primitivism in our age of the genome/algorithm. To those I say we’re being sold a bill of goods, and that there are two alternate futures. “They” tell you that the genome/algorithm is the future and that Man was not made of clay. What “they” don’t tell you is that this belongs to a specific future of labyrinthine complexity and psychotic mundanity. There are plenty of sci-fi dystopias about that (Harlan Ellison’s I have No Mouth and Must Scream).

That future is grim, robotic, inward-turning. There is no room for frivolous gaiety. The unconscious, unthinking life attaches one to symbols of the mind, to the abstraction of nature, the hint of spice in the air, of mouldering leaves amid Diana the huntress and her hounds. 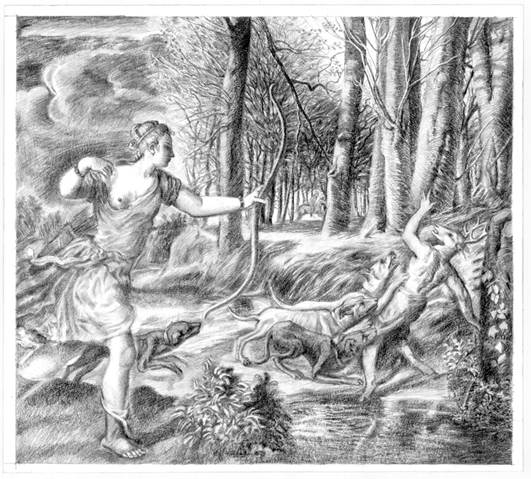 These are outward-bound things and they’re not facts, they’re aspects of a lifecycle, of a symbolism between gaiety and sacrifice or degradation. Now, you say Man was not built of clay, but he does return to clay, and it is this aspect that a purely factual future has no time for. Facts are labyrinthine, but the symbolic aspect of being is simple, and that is why the 30s pulps are psychologically so forceful.

Psychology, simplicity, force; these are things you don’t find in a genome/algorithm future. Dance and revelry. 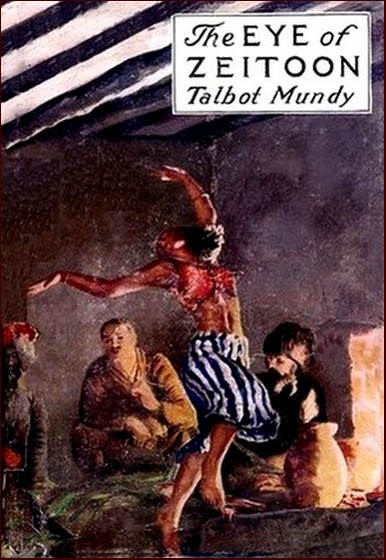 So why don’t you find these things? As I said before, the labyrinth blocks off symbolism of the mind, the universe; the dreamworld, the pulps (THTRB 2 at end.) Look outward to symbols of the mind, and they become simple. The claustrophobic future they postulate is inward-turning; essentially it’s Bezos, Musk, the Uber guy.. those who will inhabit this labyrinth of facts; they who will engage in these feuds that come right out of Xuchotl and Red Nails. The 30s Junto.

Outside Xuchotl is the outer world where psychology is simple and forceful (see prev.)