Denizens of the Netherworld 3

They’re gonna sow west Texas with them windmills. Yep, I was reading a “predictive” business article on Bloomberg’s FSP, which foresees trillions of dollars pouring into “green” energy and out of fossil. This is the same Bloomberg who took the NY out of New York with, yep, a blitz of dollars.

The key word to these guys seems to be “predict”; they’re just gonna lay down them solar panels and storage cells and wait for them dollars to roll. What “they” (Bloomberg’s pals Yellen, Trump, Bezos, Musk et al) would never in a millions years recognize – cos they’re so sighted on the future – is they are building over the great American eco-culture, from Texas steers in the west to New York’s old meat-packing districts in the east (CH 8).

Again, a large part of the reason is that ritual formulations of language have entirely replaced a visionary image (Alternates 3). These guys live in their heads and the journalists amplify their thoughts a zillion times. If you’re gonna say “Trump has few thoughts” so why is he always saying he’s so smart? Because he thinks in a certain why. He doesn’t live in an old, overgrown el Paso ranch with coyotes howling at night in a state of introspective reverie; he lives in his ego and the ideas that fizz inside.

Like all these people they’re inward-turning, surrounded on all sides by the walls of labyrinthine language. Even if Trump supposedly has trouble with language, he still tweets day and night. There are basically two different worlds; one has inner content and strong style with unthinking grace. It is not “thought out” because that means entering the labyrinth of the mind where all the futurologists hang out. They’re all heirs of Rand in one way or another.

I have never wanted to extirpate innocence. I don’t want to thrust the facts of life on children of four or five. What I’m against in a quite visceral, loathing way, is the sentimental vision of childhood you get in books written in the so-called Golden Age of children’s literature. Peter Pan, who thinks it’s better always to stay a child, some of AA Milne’s verses, I can’t bear them, they make me sick!

Children don’t want to be children – they want to be grown up. The games they play are about being adult. Recalling my own adolescence, encountering sexuality and intellectual excitement was all part of an extraordinary, wonderful, glorious awakening. The whole universe began to sing. So when you get people like CS Lewis in the Narnia books lamenting the fact that children have to grow up, it makes me very angry.

Translation: the state of unknown wonder of childhood is unimportant. Wrong: it’s vital to life. Our physicals state of being, our sense of childhood, connects us to the universe. The connection is to do with Dionysian urges – the will to live – and Apollonian fantasies, dreams.

The inner life tends to reflect the outer universe, so you get in CS Lewis the forests, planets, fishers, winged horses, the lion Azlan who may be an allegory of Christ. Our physical state of being, the fact that we are animal-like, is represented in these tales.

So that whole mindset is physical and lusty; it’s to do with desires and not thought. The myths of the shapechanging Wesakechack in Indian lore are part of that province. All these tales connect us to the fabric of the universe – even to fabric itself, if you think of animal pelts and rawhide! It’s lusty and musty, bloody and gay all of a piece.

This is the reality that “they” – the type Pullman speaks for – don’t like because it is replete with opposites. It has melancholy and gaiety of a piece, also nostalgia for a time when life was simpler. The presence of melancholy is annoying to these types because it exists outside the labyrinth of thought to which they belong. As we’ve already seen, though, without melancholy (degradation or decay), Dionysian gaiety is not possible.

What you have in its place is the insipid “intellectual excitement” of Pullman and his ilk. This is the future they have in store for us and you could reel off a list of names of unfriendly neighbourhood futurologists. There’s Dawkins of the “genome is the new God” mantra (see CH 5 Yggdrasil), the hyperloopers and electric-green machines of Musk, Bezos and the rest (zzz).

"Life is vibrant, red and savage and these insipid sophists who happen to be sitting on the roof drawing room of the world can’t seem to understand that their form of life, what they know as life, what is life to them, is not the real existence, is not important to the rest of the world at all."

The mistake of the “model future” is to think everything can be described; that’s a classic error. Facts are labyrinthine, and that’s where “they” will end up. The electric-green future planned isn’t green atall; you won’t be seeing wild boars’ eyes glittering in the gloaming; you will be hearing, though, a lot of propaganda. Again, it’s the conflict between ritual formulations of language and the basically simple images of unthinking expressionism. Myth.

You might have noticed that Pullman is completely convinced of his own correctitude? This is another classic error (just listen to Dawkins for God’s sake). Because they’ve entered the labyrinth of language they think that’s all there is – but often words are not enough. Have a glance at these two pictures 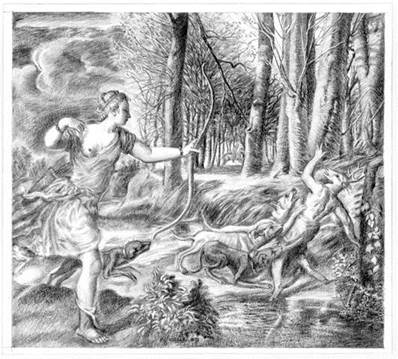 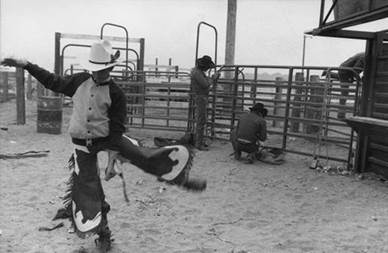 The two images of a 20th century cowboy in chaps and a Grecian goddess are from different worlds – or are they? They are connected by a sort of poetry-in-motion. Here’s a rough checklist

His headband matches her hairband

His raised left leg matches hers

The pose of the vaulting cowboy on right echoes Actaeon’s

You could say these are just abstract qualities, but don’t forget these are figures in motion. They happen to be human but the same applies to a wild stallion.

What the denizens of the labyrinth don’t get atall is anything to do with unthinking states of being which is actually what reality is. Grace in motion; the Bruce Lee ethos. Lee coined the phrase “a war between a robot and a wild beast” for his style of fighting; he relied on complete freedom of expression – see CH 9. Without the freedom you are restricted by formulations, routines that cannot be direct expressions of your body/mind. He is so insistent on this because it more or less is the physical state of being.

By entering the labyrinth, the formulators of ritual language close-off reality and are staring at walls of their own devising. It’s an ego-trap. No wonder Dawkins, for example, is so blaring about his genome ideas since he thinks he’s God. Maybe he is where he is. These people are completely blind to shape and grace, the form of classical ballet, anything of expressionist myth.

There’s a problem with language because, in order to be evocatively descriptive, it has to have poetry. Howard’s historical adventures, as I think I mentioned elsewhere, have a gaunt, larger-than-life shadowy edge that is not to do with fact so much as a sense of presence. The figures live in the frame he evokes.

Language of that type has a sense of the inarticulate in the cosmos at large. Again, these are opposites that a rational mind simply cannot apprehend. There, in their labyrinth, there are no opposites, only ideals that they construct for their own edification so, obviously they make logical sense, they’re just not real.

It's logical and the illogical borrows from the logical. Your Corneille said it in his preface to "Surena." (Fritz Lang quote in Le Mepris)

I don’t wanna pursue this too much as it’s obvious who they are and why they have no time for classical themes of primal lustiness. They’re in their own minds, their psychotic apparitions of brute cunning (the typical politician, or Thoth Amon THTRB 2)

Classical myths have a tendency to be sort of bloody and sacrificial, and you can see echoes in Howard. The death of Belit and her existential rebirth in the throws of battle; the scene of Conan crucified in A Witch Shall be Born. His historical tales are mainly set in crusader era, the time of belief and self-sacrifice set in the holy lands and beyond. At times knights and Saracens fight side-by-side, as in the siege of Jerusalem (The Road of Azrael ).

NEXT: ASPECTS OF SOCIETY