The garlanded girls in Jeffrey Jones’ picture are emblems of fertility. Like Proserpine, they embrace the presence of blood and death. It’s a poetic act embracing opposites. The psychosis of modernity is that it cannot see what is plainly visible in the narrative poems of Spenser (16th C) and Byron (18th C).

It cannot recognize the symbolism of blood and gore, the necessity for regenerating earth’s soil, and so they stand like blank-eyed robots, cut-off from the embrace of Mother Earth. For the embrace of Proserpine is not always tender, ever entangled as she is with the bleak touch of death. 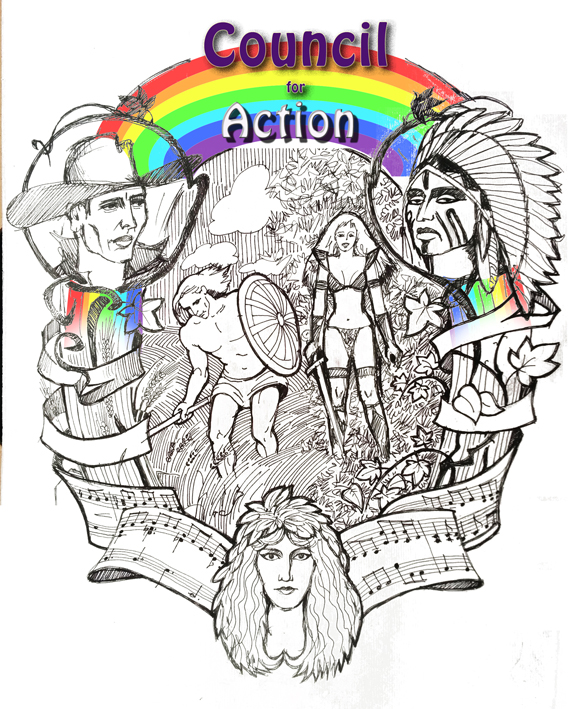 (unfinished emblem/badge of intention by artist Elena Priestley. She will sign and number full-color finished copies for sale. I’ll send the link shortly)

.. a future of heat and dust, of darksome glades, of speeding through forests by night, of prairies thundering with cloven hoof (again), the harshness and the rain.. This world has to be won (again) by blood and gore. The blood that regenerates Mother Earth; the mighty herds of buffalo that roam again the plain.

All that will be put-down as poetry in the era of electric-green machines; poetry that describes a world that is invisible to the “fat and round”, one of strength and swamps, of throaty croaks and lone warrior, of low-slung carbines and savage breasts. 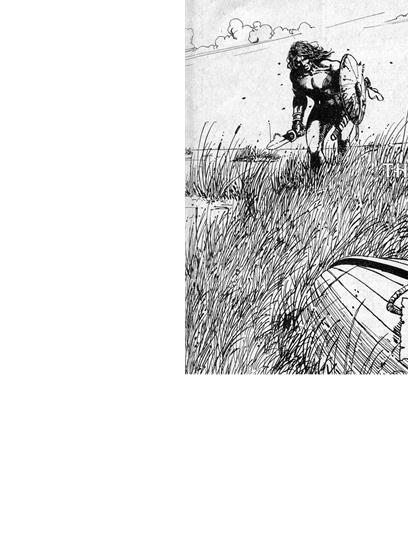 By describing that world, it renders visible what is hidden in the labyrinth of modernity – the dragon foul.

Till that some end they finde or in or out,

That path they take, that beaten seemd most bare,

At length it brought them to a hollow cave

Amid the thickest woods. The Champion stout

Eftsoones dismounted from his courser brave,

And to the Dwarfe awhile his needlesse spere he gave.

The dragon is an ego-trap of the labyrinth; one has to seek out the quite stream, the lonesome dale that connect us to the quiet places of the mind and earthsoul. Such is “The Blood of the Unicorn”, the first Clair Noto-penned Red Sonja (then called Clara).

The plot is the theme of life eternal which “mortal will chase.. until both stars and unicorn are scattered dust.” (page 27). Yes, they will chase their grim endless quest, while all around, unnoticed, are blood-red motifs of nature’s degradation and rebirth. 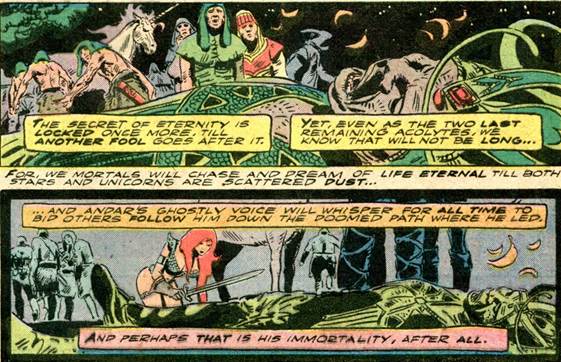 When the beast’s horn is broken in battle, the regenerating horn binds the two to a spiritual and sensual beauty, garlanded with flowers of the forest. 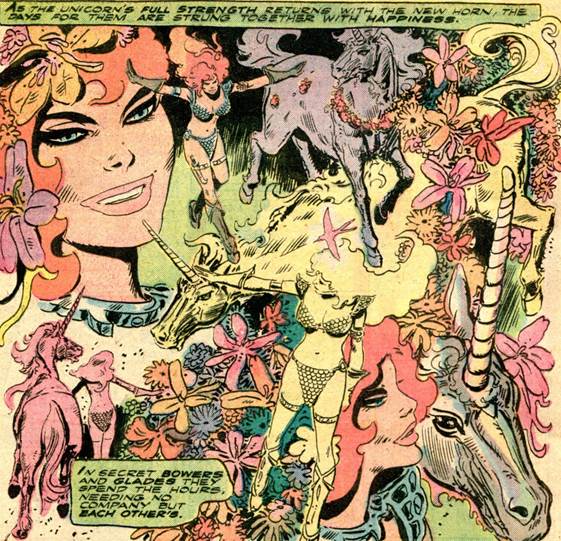 Their strange alliance draws the furious folly of Andar, wizard of Bezfarda and his acolytes. Red Sonja is sorely pressed, but the unicorn rides to the rescue “to skewer him like a blood-red leaf of autumn on a sharp twig.”

They finally part, drawn by the hands of fate 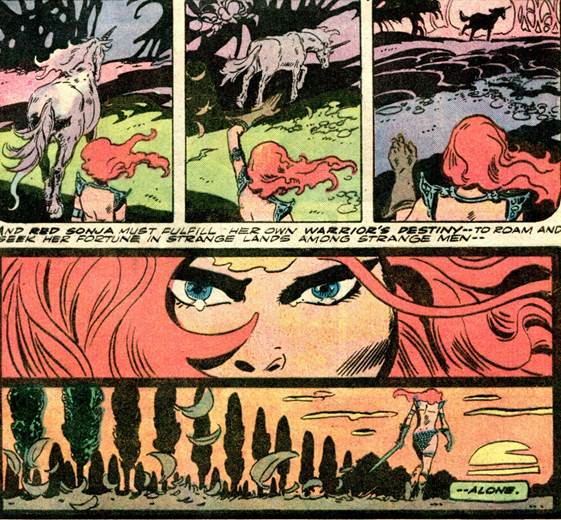 This is a nice symbolic story framed by autumnal imagery, and the blindness that lust for knowledge instils in men. The blood of decay and regeneration is a common theme through Noto’s Red Sonja stories. Her work has been called faerie-like and shares with Faerie Queene a voluptuous sensuality. Classical beauty is of two types – sensual and spiritual, and the kinship of woman and unicorn is of pure and elemental spirit.

The working together of these two parts is down in no small part to Frank Thorne’s art-deco-esque framing of the narrative with squirls and tendrils. The unicorn has a pure soul, a spiritual truth that draws Sonja towards him. A purity and stillness that is the diametrical opposite of the labyrinthine foulness of the dragonspawn, as drawn by Spencer.

The dragon is the monster of the labyrinth, spawning noisesome fire-fiends that drown-out the “quiet night “ (Garden of Man). The quite night of hunt and chase, of Diana and her hounds, of Sonja and her unicorn. The night, in short, of unconscious symbolism. Blood and fertility. Red Riding Hood.

This faerie-like view of nature is diametrically different to the “factual” one of Darwin, but all that goes to show is that facts tend to drown-out symbolism. But which is more vital? The fact that we are related to apes doesn’t impinge on our unconscious, the vital links to the hunt, the chase, the spilling of lifeblood and the rising again through regeneration. The chaste maiden of the hunt as seen in Jeffrey Jones’ picture.

There are two types of mind here. The faerie-images of Spenser, of Noto and of Jeffrey Jones represent the unconsious. The noise-belching dragon represents facts that tend to drown-out much more vital symbolism. For symbolism connects us to a cosmos of lifedeath, the twilight greenery of the quiet forest.

Besides these symbols of rebirth, the facts of evolution are not important. Does anyone seriously think that Darwin was the first to dream-up his idea? It’s much more likely the fashion of the day fit his assemblage of dry facts (zzz).

In “The Blood of the Unicorn” the autumnal symbolism of the blood-red warrior woman and the regenerative power of the unicorn have a fierce freedom of spirit. The man of knowledge, wizard Andar, seeks to destroy these free spirits in order to gain eternal life. This is a good metaphor for the accumulation of knowledge that is itself labyrinthine and destructive of the much more vital forces of life and death. The regenerative principle itself. The meadowgrass upon which the wild herds tread; the lifeblood that is shed.

These sort of cosmic symbols are eclipsed by Man’s building of facts, and this is the psychosis at the core of “the man of knowledge”, a trap that feeds the cunning monster of the ego. If you recall (Denizens 3), Philip Pullman completely lost the grasp of a childish sense of wonder. This is an ego-trap of the labyrinthine mind for, without Dionysus – urge – and subconscious vision (Apollo) there is no inner content.  Psychological content is everything to do with desire – childlike urge for life – to grasp the meadowgrass upon which wild beasts tread.

With desire comes an intuitive grasp of degradation, of melancholy. This is existential knowledge that is lost to the likes of Pullman, who simply represent the banal state of contentment that affects much of the human race. Symbolic knowledge is the opposite of ego-contentment for it tells you that that is just a lie. It’s a lie based on the facts of evolution that we are simply clever apes, when the entire unconscious realms of desire and imagination are omitted.

That is, the entire classical world of melancholy and tragedy are omitted. The world is not actually happy and rational; it’s melancholy but also gay and frivolous. This classical (psychological) knowledge is what feeds into fairy tales, Wesakechack the benevolent trickster, The Tempest (monsters of the id), the romantic epic tradition of Spenser’s Faery Queene (Grant Morrison’s Mr Nobody)..

So, Noto’s faerie-like approach to the Hyborian Age seems to have an affinity with the olde englishe post-medieval romantic tradition. This faerie-world really comes into its own in “Red Lace”, a multi-issue epic starting in #10.