"Man has realized since the time he sprawled, a silian of the primal beaches, that there are things beyond his ken; many he has attained; far, far more he only guesses. The alchemists of the Middle Ages knew, and they went insane, for in their wild search for gold, their minds lost themselves in the mazes of a world unknown to them. How much of the Initiates knew, none will know for many a thousand years, for by some wild freak of Destiny, Time turned back centuries, and the Kali Yug, the Ages of Darkness set in; and the ancient knowledge was forgotten. But there are dim islands and continents in the great shadowy sea that is the human soul, and sometimes they are illumined by some master-pen such as Lovecraft’s, and one almost remembers things forgotten through the shifting sea-fogs of the centuries. Mr. Lovecraft has reached an arm out into the unknown and a lesser mind than his might hesitate; but I look for even greater wonders from his pen and look forward with anticipation to another of his tales. […] I merely wished to congratulate you on your magazine, and make a comment or two on Mr. Lovecraft, but somehow I have gotten off onto my ideas and theories."REH to Weird Tales

“The mazes of alchemy”, in Howard’s phrase, reach for gold as the cunning wizard reaches for eternal youth, and finds only death. For the labyrinthine spawning of knowledge is a foul dragon that belches fire of misrule at the quiet world of symbolism and fable; of childhood innocence and wonder.

It’s an ego-trap, a monster of misrule that pits the mind of Man against the quiet places, against the “unthinking” world that connects an animal-like cosmos to human desires. Wesakechack, the benevolent trickster of the Cree. Myth or moral fables are not straight-line articulate thought since they articulate the moral state of the universe, which is an association of opposites.

The basic trap is there are two types of knowledge (as the Greeks probably knew and as the alchemists found). Knowledge that is labyrinthine harbors the dragon of misrule that basically destroys by fire (ego) real symbolic knowledge of the moral state of the cosmos. Children’s fairy tales. Noto’s Red Sonja.

Noto’s weirdness is reminiscent of the original Weird Tales which, as Howard’s quote might suggest, articulated a psychosis that is ever-present in men of knowledge. In our modern age the mouth of the “highly articulate” rationalist spawns a type of trap that leads to ritual formulations of language – the labyrinthine products of economics or of Darwinism. Outside of this area is the real world of lusty vibrancy, the one written of by Howard and the 30s Junto. Facts actually eclipse knowledge of the cosmos that is much more vital – because symbolic of life, death and rebirth. The berserker trait in Howard seeks to reconnect with that spirit of gay abandon, and I think it is quite easy to find a link with the romantic epic tradition – as mentioned earlier – of Spenser (Faerie Queene) which is sensually voluptuous (nature, maiden), gory and with a spiritual intent (the pure knight).

Even closer to that tradition (if I may be so bold) is Clair Noto’s unbridled Red Sonja epic “Red Lace” (#s 10-13). There is Suumaro, outcast knight of Skranos, who is for sure of pure soul and intent on retaining Sonja’s love (of Adonis-like looks). The story takes place in a primeval forest, where Apah Alah, spurned sorceress mate of Quillos of Skranos, curses their temple of seduction, causing it to from roots of green. The hell-fiends who guard it are neither male nor female but are bound in crimson lace (shades of Faery Queene – Aspects 1). 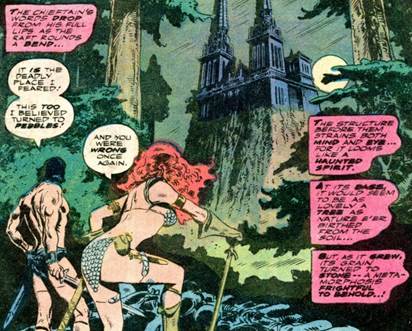 The story that unfolds inside the tree-temple is fantastically bizarre – mere words can do no justice – but it is somewhat reminiscent of a journey to the underworld in Greek myth, where the power of death is personified in Pluto and his bride Proserpine.

Proserpine spends 6 months with Pluto and 6 with her mother Ceres (spring), so that her dark dormancy springs to abundant life. In place of death, “Red Lace” is awash with blood, which can also be taken as a symbol of both death and life. The theme of rebirth and new birth, of gems that hatch miniature fowl, of rocs that fly and die, are interwoven with themes of blood-lust and violent violet plants. 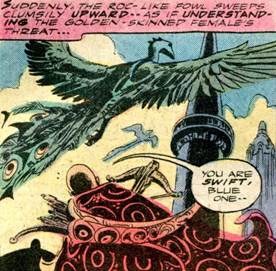 It’s fantastically sensual, gory and with a pure spiritual intent that muddles through to the end, with Apah Alah’s wooing of Quillos and Suumaro’s regretful parting from Sonja. I would say that Noto’s tale articulates an association of opposites; the underworld is deadly  and bloody but it is also a powerhouse of revival and regenerative spirit. This sort of moral fable is completely outwith the modern rational egoist; as mentioned earlier, their failure to see things doesn’t mean that the death-instinct doesn’t exist, as a psychotic urge.

Noto’s infatuation with blood takes you back in time to – not just the romantic epics of Spencer or Byron – but to the nature-romance of Jean Jacques Rousseau. Let’s not forget Rousseau’s influence on what came after – the French Revolution and American Independence. Rousseau’s “contract” with the citizen was to be good (moral) and happy, but it tends to be overlooked (by politicians) that his notion of happy necessitates living in the bosom of nature.

This is therefore very reminiscent of Spenser’s and Noto’s rampant sensualism (that is also found in Howard). The link with the sensual entails a return to romance; and the spiritual purity - the pure soul of Noto’s unicorn or Spenser’s Knight - a return to the good (moral).

The highly articulate rationalists are in a trap of their own devising. They cannot conceive of blood-red symbolism that signifies a rebirth through decay. Something that seems so melancholy and abstract and purely symbolic can have no rational justification.

And yet this is the world that is celebrated by Rousseau as the happy one, because Rousseau is pre-political. He’s a philosopher, not a rationalist. The blood rebirth of autumn and spring is something found only in poets and philosophers, painters and pulps Roman mosaics).

“Liberte, Egalite, Fraternite”, e pluribus unum. Words, but without a return to spiritual purity and sensual happiness words they will remain. This entails a return to romance – the enchanted forest described so voluptuously in Faerie Queene and in Noto’s faerie-world visualization of Hyboria.

Whether you give them a name – Macron, Trump, Merkel – doesn’t matter since they are representative of one thing. The monster of misrule, the cunning dragon that belches forth from labyrinthine hide. I suppose that might sound like some Lovecraftian fable and that’s not unintentional. The original Weird Tales was a welling-up of the unconscious that modern Man was leaving in his wake.

The unconscious is freedom and without it the voice of the machine god holds sway; another name for the lord of misrule. The world-devouring demon that is a product of deranged order; Rome at the time of Revelations (the whore of Babylon). These burgeonings of unconscious beast-like imagery are nothing new. They are a sign of a war of civilizations, between different types of men.

I recently saw Ben-Hur (1959) for the first time and it is fabulously fair-sided between the Consul who speaks for far-off Caesar, and the Jewish noble who speaks for God. Hur’s nemesis Masala who sends him to row as a galley-slave is not evil, no, but he is political and simply takes advantage of Hur’s misfortune to impose his authority on rebellious Jerusalem.

The Roman represents a certain type of man; it’s not a case of good vs. evil. The cunning authoritarian rational egoist who becomes an engine of destruction. The world-devourer of freedom, of the unconscious, who speaks of honour and loyalty.

They are not bad men but they have fallen into a trap of their own devising. A maze of orders and edicts that leaves no way out, and where conflict with the free will of the unconscious spirit must occur.

In the film that is taken into Biblical territory. Wherever you take it it’s a conflict that has to happen or Man must ever be a slave to

The Beast of Misrule