The prophecies of Rachel, verse 190.

Now into the second week of war-games, the encampment has grown steadily more boisterous as shtetlan camp-followers ply their various trades. A gay market-cum-slaughterhouse has grown-up on the periphery and the food, spices, coarse fabrics from the Levant and sundry entertainment have attracted a polyglot crowd.

The sound of beasts braying, the odd spectacle of a ritual slaughter for the battle ahead, marquees mired in mud, women of the night - seemingly all of life and death is there. This has proved a rich honey-pot for the disaffected youth of Europe, and not just the youth for Mini-Merkel has taken to the life of casual gaiety to the extent that she has pitched tent and wears peasant chic.

“Here we see the battle for the future of Europe. We live, we laugh, we sing.. and wait for the slitherers. If they don’t come, so be it, I go back to Berlin. Here, there are no diktats, here the people are free, easy and ready for anything. We shall see.”

These public utterance have proved too much for Donald Tusk, who is due this very eve to make a speech from the very battlefield where the forces of reaction are gathered. A steady rain has fallen all day and blankets of storm-clouds are gathering as Tusk arrives on a donkey and, with good grace, slides off into the mud and pats the creature’s haunches. He is handed the mic.. 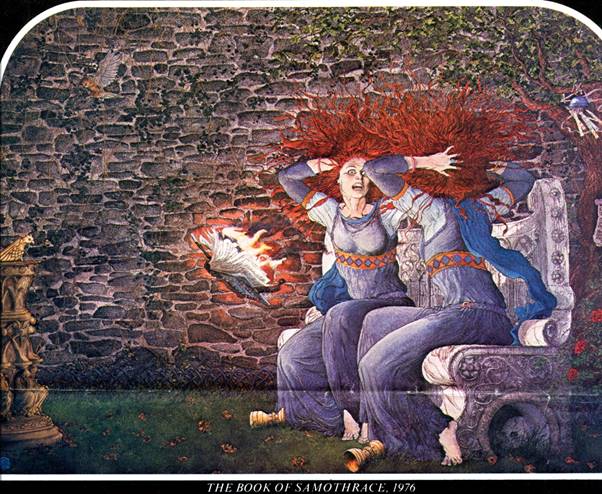 Casting an eye at Samothrace or The Enchantment, both dealing in the duality of spirit, death and reincarnation.. The artist’s self-confessed dual-personality is not only evident in his canvasses. His life reflects and in some cases is the mirror image of his pictures. “The fantastic element in my pictures is just the pictorial device I use to explain my point of view. The duplicated images of Samothrace are construed as graphic fantasy, but what would you say if I told you I believe it as fact?” (The Studio, p104,105)

BWS’s mythical pictures have very individualistic symbols (Hyborian Bridge 17) but it’s hard to deny a connection, particularly since Talbot Mundy’s Tros of Samothrace is based on similar lore. Mundy became steeped in the teachings of Madame Blavatsky and I’m gonna give a precis here, but it’s not intended to be accurate; Blavatsky changed her statements over the course of her writings, and the identity of the Ascended Masters in Tibet is disputed.

Gary Lachman said that, instead of a literal cosmology, Blavatsky should be seen as an attempt to form

A new myth for the modern age, or as a huge, fantastic science fiction story (The Mother of Modern Spirituality New York/Penguin, 2012)

Blavatsky talks of seven solar (planetary) deities, astral bodies and reincarnation through karma (ego humility), and that the universe is emanant – emanating from - an absolute. There are seven “root races” which bear a lot of relation to Hyborian names, and readers of Marvel Comics will sense a closeness to Doctor Strange.

Now, since I’m using Hyboria as an overlap with modernity, you may agree that type of critique has at least some facets in common with Theosophy? In particular, the belief that reality is illusory, in a similar sense to Plato’s “parable of the cave”. The implication is that, the more one studies reality, the more one approaches illusion. By that criterion the whole of scientific method (dating from The New Atlantis) is illusory.

Instead, the way to approach truth is through direct appreciation: since the universe is emanant (emanates from) an absolute, each individual reflects the emanant, and they are tied to planetary and cosmic evolution (the microcosm reflects the macrocosm.)

Now, if you’ve been following what I’ve been saying about the supreme-sorcerer, his theory (relativity) is a reflection of Faraday (electromagnetism Hyborian Bridge 21). The end-product of empirical reason (from The New Atlantis )is we live in a relativistic universe, or a universe of reflections.

The basic problem is that an emanance isn‘t convincing atall - it‘s much more like fantasy, myth. The way round this is actually comic books! Comics are fantasy, but they are also reality because the movements of characters are sequential in time. The question is: why has empirical science not grasped that idea, why has it become reflections (electromagnetism)?

The answer has to be that the theories of scientists occur in the brain, or electrochemical impulses, they do not occur in reality, because reality is sequential (like comics). This difficulty of grasping the nature of time (by the brain) could well approximate to the illusory nature of reality. Einstein said, „Time is an illusion“, and that’s right! It can’t be grasped by empirical reason (The New Atlantis) and has to be experienced.

The illusory nature of reality is above all temporal; the movements of throat, song, dance and macrocosmically the movements of planets (stars). All that countenances drama, and the idea that ancient rituals put us in touch with cosmic forces. The Samothracian trials and tests that mirror the trials by fire inThe Magic Flute.

These very ancient practices – according to Theosophy – predate the established religions, so there’s quite a link with Hyboria. Apart from that, the entire field of pulp fantasy seems to owe a bit of a debt to Madame Blavatsky. Whether it’s A Princess of Mars or CL Moore’s Northwest of Earth, the idea that planets have a psyche that is reflected in the type of lifeforms that inhabit or frequent them.

The Studio has a quote on its preface from Oscar Wilde’s The Decay of Lying, and there is that sense that dramatic vistas have been stripped-out by modern advances. What about the complaint that all that is fantasy? Yes, but pulps are very dramatic; they have princesses and heroes, love and death, devilry and courage. If, let’s say, we live in a world that is very convinving but undramatic, what does that tell us?

It tells us that we are no longer party to the illusory nature of reality – which is where all the drama comes from. Drama is action and movement - the hunt, beasts of prey, Diana and her hounds bounding loose and wild ‘cross vale and moore – and from that the predator-prey cycle that gives us strength, gaiety, the vine – Dionysian lusts, fertility.

This is why a world that is too convincing can still be illusory, because it misses out on the fundamental drama of becoming, of death and rebirth. Everything in our world relates to light (sun) because that is the technology we live in. To take an example, „they“ have designed a robot hand that plays piano

So, this is an electronic device that is fairly flexible. OK, but it’s outside the cycle of death and rebirth that gives us human emotions, the cycle that strengthens our reality and gives good cheer. The things that strengthen our reality are dramatic and predatory (cowboys and herds), anything else is merely a gimmick. The ultimate gimmick is AI, or a single photon – quantum AI Hyborian Bridge 33. Then there’s Musk and his „boring tunnels“, which is just another way of moving things undramatically for the sake of speed (zzz).

Life is dramatic for a reason: it gives strength, psychic and physical and fertility. If science has difficulty with drama, it’s because of the illusory nature of reality. But anything else is just another type of illusion – one born of weakness and ego. Because of the supreme-sorcerer, this illusion is a convincing one (sun) but the absence of drama tells its own story.

The prophecies of Rachel, verse 191.

“My fellow Europeans, this is the very soul of romance. Yes, I am not blind to it. I see the crescent moon, smell the earthy dishes, am attracted by the gaily dresses throngs. This is a side of Europe that we in Brussels can be attracted to – yes, even the mud!” (laughter)

“ I am here to tell you, my friends, that we in Brussels have space for Transylvania. Yes, we are a continent of the future, of light, but we are not small-minded, there is room for everyone – and the donkeys” (laughter) He carries on in this vein for awhile and, as the dark night falls, a ragged fork of blue-green lightning casts the scene in demon hues.

“Ah, yes, the heroic vistas of the Transylvanian twilight I grant you Brussels lacks. We are the light to your dark, your mists and – oh, yes – your Dark Knight, the fellow who vanished into.. the mists. Ha ha ha.. your “eldritch” mists.. your eldritch technology.. Ha ha ha ha..”

The crowd starts to grow restless and Rachel, a propos of nothing, shouts, “Phaugh!”

“Phaugh! Technology cannot be born of darkness. It is a high-priest’s trick.. Moshe.. uses smoke and mirrors. Mosss says the bridge, the one we are standing under, the one that’s always ssshrouded..” At this point, lightning is flickering on and off and, to the astonished crowd, Tusk appears to be flickering with it.

Then he flickers out