I’ve been catching up on X-Men continuity recently, and Claremont is certainly a master of high-fantasy, in a line that could be taken from Weird Tales through Moorcock and then Claremont’s New X-Men (1975). Elric, you may recall, featured in Conan #s 14,15, with the wizard from “Zukala’s Daughter” (Hyborian Bridge 21).

If demons were extant in the modern world, you can imagine they might utilize modern technology – and this is typically what Claremont does 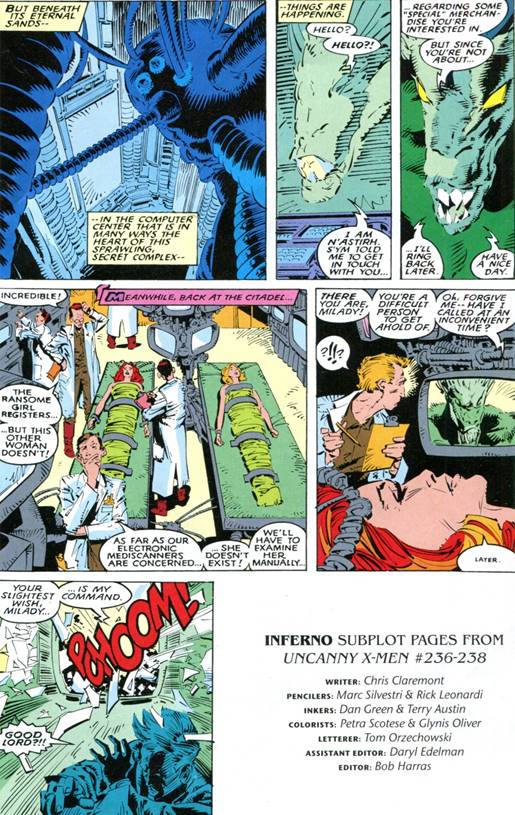 They are very au fait, almost blasé; they are elemental beings, usually evil, to whom technology is just a means to a vile end, no different to any other.

What fantasy and comics do is expose the primordial elements that are always there, but are hidden by the ego (Cameron Hodge, prev.) and hygienic contraptions. Demons are nasty creatures.

In Euripides’ The Bacchae, Dionysus is denied by king Pentheus with fatal consequences to himself and society (The False Apollo). The primeval lusts threaten most when they are least on show. This is where the future of smart-contraptions to attach to the head that “they” are happily building turns in on itself and implodes.

Such a society will have no continuity because continuity is the body-in-action. A body is proportion, the head is proportionate to the body = athlete, warror-statesman (Pericles).

The innate grace of the athletic figure engenders rhythm, song, dance, the looseness of street vibe (Harlem Bardot). Now, what demons do is strike a bargain. The prey – like Madelyne – always thinks there is something in it for them, but they are an empty vessel. The heads that see the world through electromagnetic eyes are easy prey because they always tend to think the facts they are getting are real. 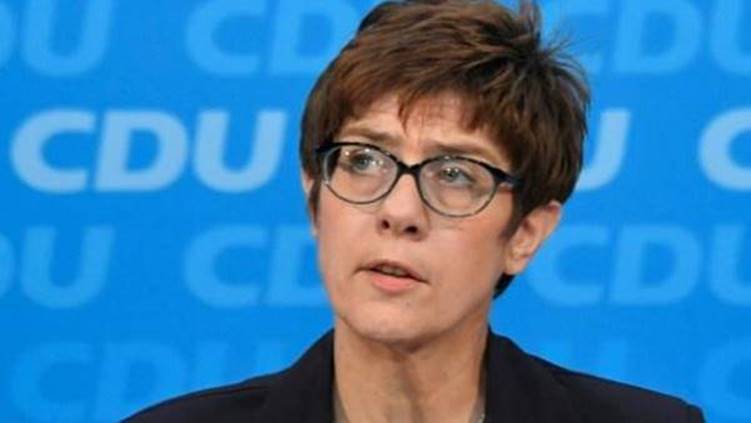 The end-result of the argument is that all the facts we get are electromagnetic and we are disembodied heads in a hygienic space. This is when the “demons” want because we enter a farcical world completely divorced from reality. 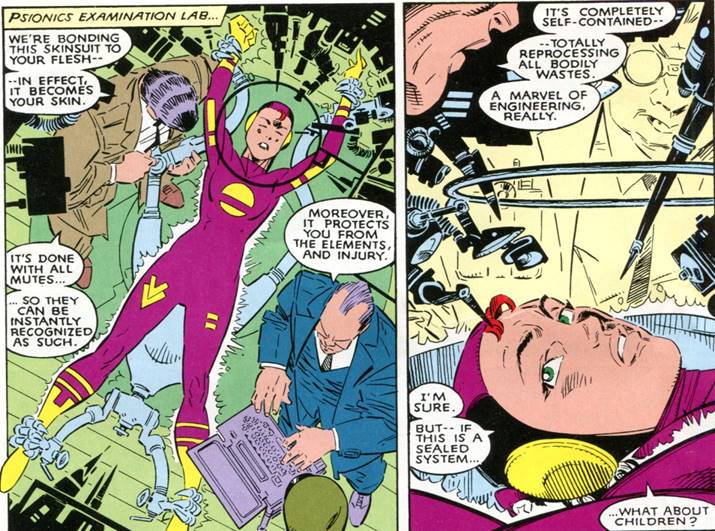 Any reality that connects the head to electrodynamic devices is relative because there is no sense of proportionate body. The athletic body is absolute, action on the Earth (in the seasons) is an absolute, and FROM THAT comes continuity (chronology Pictorial 37).

This is why I always see comic books as an absolute medium par excellence. I picked-up X-Men: Inferno – the color collection containing all the bits from Louise Simonson’s X-Factor, X-Terminators and Claremont (not Peter David, being no masochist, gimme a break), clipping bits and joining them together in a logical sequence of events.

What you realize is there’s no way you can get lost in there because you are inside continuity. You know precisely where you are in space and time, no matter how fantastically unlikely it all is. This is EXACTLY the sense that “they” don’t want us to have. They want us scurrying around, carrying our bodies as so much baggage until they finally wear out.

The entire field of meaning and power – that is to say, of dirt trails, hoeing the earth, galloping freely through space and time over fertile terrain, actions that connect us to primordial lifecycles, to death and rebirth - doesn’t enter into their calculations.

This actually is absolute reality that the powers that be say doesn’t exist. It’s in our bodies, in the dirt of the fields and in the sky at night. It’s the continuity of living in the lifecycles of nature that are part of our bodies. The power of empirical traditions – cowboy, Indian, black (see Detroit prev.)

Going back to Motown, what you have is a continuity of tradition that comes from gospel singing in the predominantly black churches. With the meaning and power of continuity come contradictions: the lord above and the devil below.

This is almost personified in the figure of Marvin Gaye (CH5), at one and the same time a sex-god and a profound thinker on morals afflicting his community and the world at large (The Ecology). The difference between him and Kanye West is striking: Kanye is lauded by the media; Gaye was shot dead. OK, it was an accident, but you know what I mean.

The era of Motown was the era of meaning and power. Remember Malcolm X? Remember Jean Seberg? Seberg was hounded by the establishment for espousing the black cause and even wrongly accused of bearing a child by a black radical. She ended up dead in Paris in unknown circumstances.

I’m not accusing anyone, just stating that this was a time of meaning and power. Music then was rhythm, melody, bands wielding instruments, voices of breathy intimacy – now it’s tinkering on a keyboard.

LOVE HANGOVER (rhythm and melody are elemental forces – dig it)

Music is one of the first things to go. There’s even a contemporary track called “Let’s Marvin Gaye” as if to marginalise the guy’s persona and impact.

What we’re talking about is an absolute power – Motown – with no ambiguity in social situation and youth culture. A power that pretty much came to dominate global pop-culture. Yes, because it’s a microcosm, there is nothing relative in it. There are contradictions, devil and God. With power comes a threat to the establishment and hence now we have the establishment favorite Kanye, who has a relative persona, addicted to electromagnetic contraptions and reflections.

Basically, only an absolute can threaten the establishment; a place, a microcosmic continuity of culture. The establishment, I have to say, is very good! Confusion reigns. What I’m trying to do is follow a thread through the confusing events of the past through to now and the horror of a Bezos &Co future where blacks become whites and all is grey.

Elemental forces are strong; silicon is weak and fits a certain type of robot-brain. Strength is clarity; weakness is confusion.

The confusion is everywhere. A recent DT piece on Pepys (the 17th century diarist) equated Christian worship then with today – a massive falsehood.

On Christmas Eve 1667, Pepys went in search of some unusual ceremonies. Queen Catherine, who was a Roman Catholic, was attending a Mass (illegal for ordinary mortals) in the Queen’s Chapel – which still stands in St James’s. Pepys got in early and stayed from nine until 2 “in a very great crowd… here a footman, there a beggar, here a fine lady, there a poor papist, and here a Protestant, two or three together, come to see the show”. During his long wait, he composed a sexual fantasy to while away the time (“and God forgive me for it, it being in the chapel”).

The moral order and sensuality were not separated because morality contains multitudes. The tradition of Puritan hypocricy found in Hawthorne’s The Scarlet Letter (see “Indian Summer” Alternates 7).

Religion in days of yore had a chronology; the epiphany, Lent, Easter. A lifeforce emanating from an origin. Once the chronological sequence of events ceases to exist, God is dead – ie a living creative force (that you find in comic books) – and the sorcery of “fact” hides this from our gaze.

The “demons” live in the screen because the screen is a relative universe of electromagnetic reflections that attach to the head. Reflections are light, ie what you see onscreen. Even as we speak, “they” are working on foldable screens, a neverending..

..integration into how we live our lives, supported by next-gen 5G and sophisticated AI which will mean a better amalgamation of real life and tech that incorporates and infiltrates all the senses. (Emma Titmus of Talis Capital) 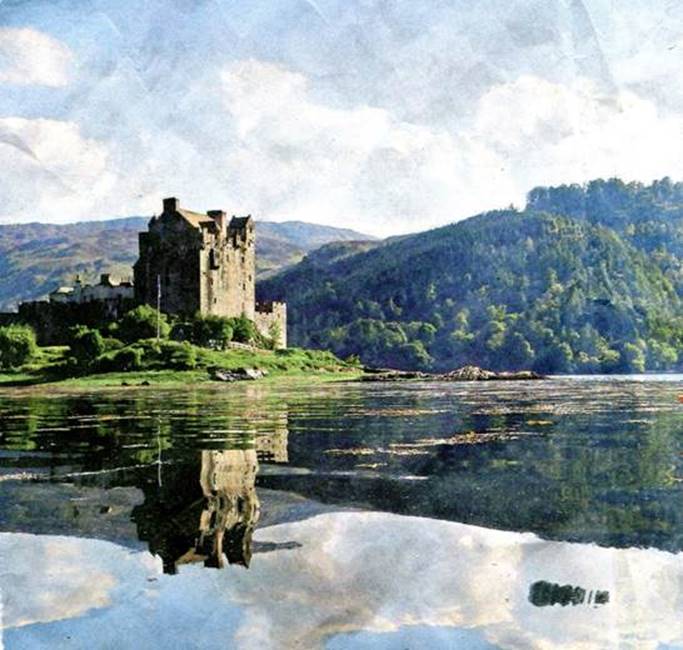 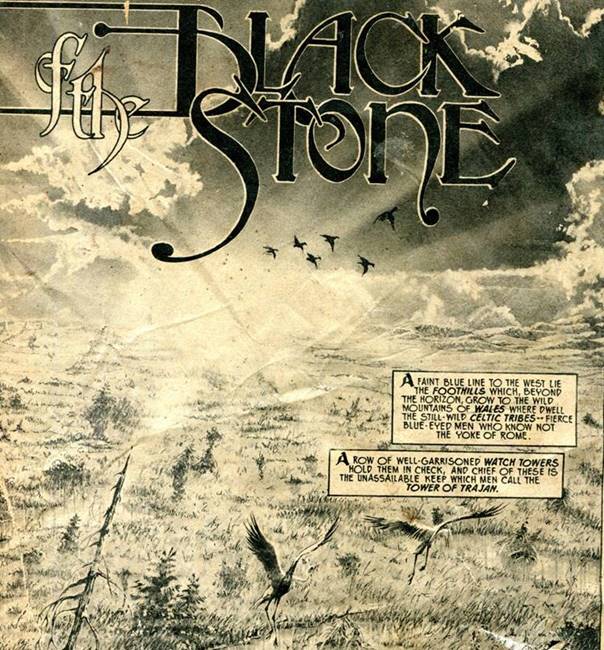