If you go back to Pictorial 25 Einstein is linked to hyper-realism and PR (photo). It now appears that his acolytes alone are to blame (Hyborian Bridge 48), since cold-blooded acolytes like a light (electromagnetism). Their entire trillion-dollar industry is faux-logic, a feeble fantasy of AI that matches the feeble reality of sameness where fact equals fiction and there is no primordial rhythm.

Hyper-realism is unreal because it is directed purely at the head – electrochemical impulses. To Musk & Co that is the sole reality; they are in a phenomenological trap (see Dark Star). Faux-realism is a convincing reality that is actually false because reflections are convincing, without the primordial rhythm and proportion of the graceful, athletic body.

Their entire trillion-dollar fantasy is directed at a faux reality that is related to light, a faux logic of universal engineering, all of which does without the grace of being. As Diana Ross says, “Ain’t Nothing but a Maybe” because the primordial essence of being isn’t going to be easy to know.

Differences make for freedom and therefore psychic strength - the psyche and persona become more dominant, as in the Outremer of Howard’s historical adventures (Pictorial 10, 11) as opposed to dominated.

The dominion of fact has led to the state where we are in a feeble fantasy of acolytes of “facts” that are reflections – CERN is a relative mathematical construct, and Einstein's quote - Hyborian Bridge 48 2nd quote - makes it clear maths can be fantasy. CERN - as an analogy to light – is inside a mathematical fantasy.Whatever one thinks of the supreme-sorcerer, he is a giant and the pedestrians are shambling in his shadow (Higgs, Hawking and their puny ilk). Inside the relative world of CERN, movements are relative movements (like in a reflection) and that is “their” fantasy math.

Einstein's quotes are very meaningful as he is not just a mathematician - he is talking about reality..(speech 1920)..

To deny the ether is ultimately to assume that empty space has no physical qualities whatever.

.. and he must have been aware this made it a universal concept rather than purely a mathematical one (light) or GR (gravity).

Let’s put it this way 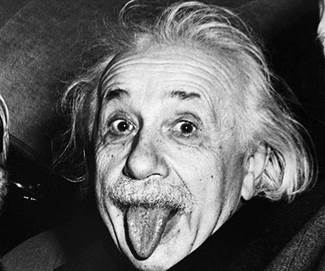 It now seems he could have been foreshadowing the apocalyptic acolytes of mathematics and he is giving a typical cynical gesture to the establishment of 2nd rate pseudo-science.

I know it seems like I’m changing my tune, but the gesture remains the same: the serpentine body of movement and power versus the talking-heads of establishment fiction. Rather than the supreme-sorcerer being the villain, it is his 2nd rate acolytes. Cynicism has a long history in philosophy (Stoicism) and Einstein is much more the philosopher than the mathematician. We live in a world that is at one and the same time convincing – fact – and confusing – fantasy – because “they” don’t live in reality.

How does CERN relate to reality? By sowing mathematical obfuscation (fantasy).

One should really return to origins, the original thoughts of Hellenism from which we are sprung. The cynic to whom the actions of a free man are worth more than pretty words or fancy facts – Diogenes. 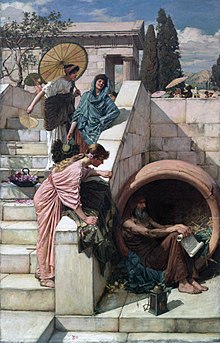 Diogenes in his barrel, Waterhouse

We live at a time when personal presence is being pummelled into purgatory by cold-blooded engineers of faux-electromagnetic fantasies – convincing reflections of the soulless mind.

We should call on Diogenes and his descendants in Kierkegaard and Nietzsche to cut down like ripe wheat these humanoid flotsam. As Kierkegaard said, in order to have faith you must also doubt because anything else is simply fact. Both faith and doubt are aspects of psychic strength, freedom, honour, duty.

The world is so full of facts which are also fantasies of a diseased idealism of the head devoid of grace or motion. The human body – the warrior, the maiden – must retake the world with rhythm and melody, force and majesty.

The acolytes – cold-blooded men-serpents (from Conan #7) - 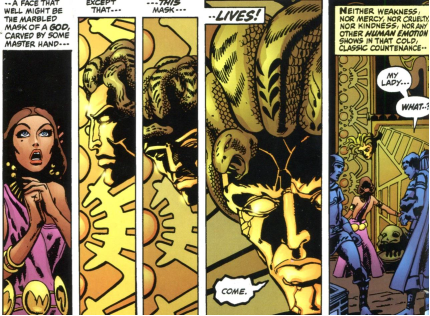 are convinced proselytisers from rooftops, weaklings who can be destroyed by melody and rhythm, the warrior and the artisan. 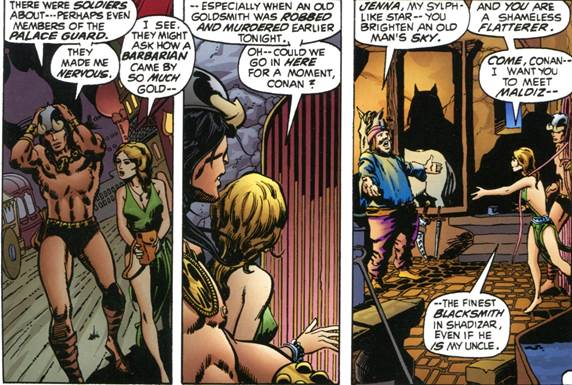 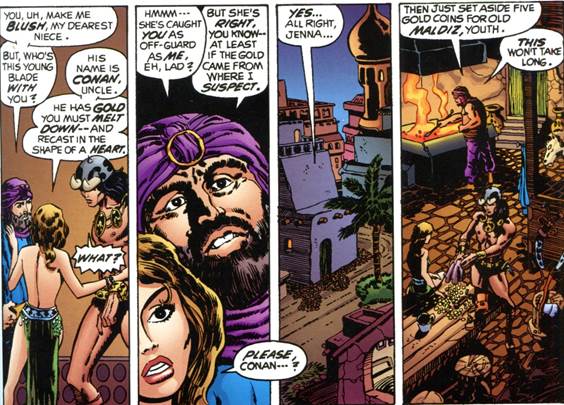 The city-state – Shadizar the Wicked – is strong and graceful and so allows strength and grace in its citizens. Freedom to be what they want to be, the proportionate power of head and body in action. Jenna, “who lies a lot”, the artisan, donkeys, promenades, temples, trees.

The acolytes are typically convinced of their bizarre idol and all too willing to sacrifice at the altar of madness and mischief. Even Conan’s raw strength and lithe cunning aren’t enough to subdue the priestess and her night god without a little help from rhythm and melody. 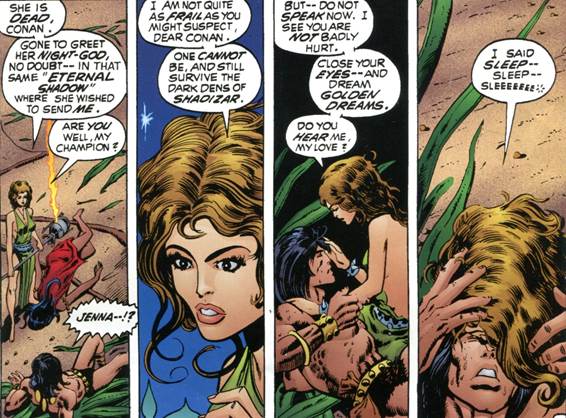 BWS’s vitreous renditions of stone and wood in these ancient city-states coupled with art-nouveau flourishes tend to remind me of early Renaissance Paduan Mantegna (a “pre-Raphaelite”.) The human action and the natural drama have an almost frieze-like clarity 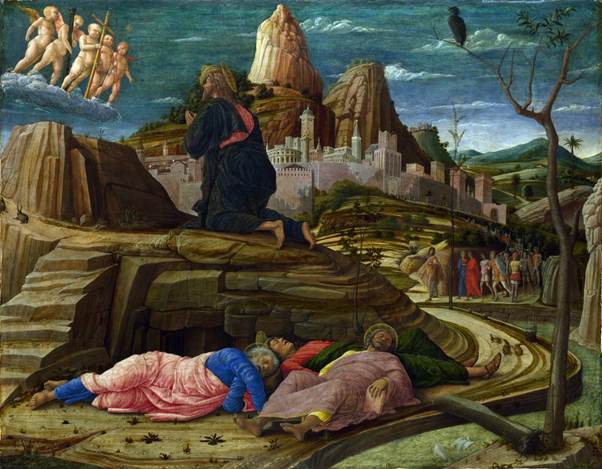 The depiction of the entirety of the scene with equal clarity has the odd effect of dispelling doubt, so that one has intense faith in the events, characters, place.

This is a roundabout way of getting back to cynicism, and Kierkegaard’s statement that without faith everything is factual. With fact there is no doubt, but also no melody, no soft strains of twilight discourse, no primordial reality of psychic strength.

The ancient city-state is a place of faith in melodic strains, in graces and places. Even when the night god calls and the acolytes bay, the warrior and the maiden are there, hard of limb and pure of spirit (that’s Conan!) – the freeborn ways that will crush acolytes of nightborn idols.