“They tell me a Texican named Robert Ervin Howard started it. I disagree; I think an Achaean named Homer did. Andrew J Offut, quoted DMR

I quoted Tim Laing-Smith in Hyborian Bridge 16 on the labyrinth – you can check the quote there – where different things – a wood, Homer, tangled underbrush, the underworld – resemble eachother in their uncertainty.

The adventurer on the unbeaten track, emissary of Man the hunter, lithe of limb, elemental, gusty. In Homer, the gods and goddesses interpose, making for an even more tangled universe (unless favoured as some are). As Daniel J Davis notes in DMR, Howard makes use of such devices in The Grey God Passes; then there’s the climactic scene in Queen of the Black Coast:

In one mad instant she was there—a tense white shape, vibrant with love fierce as a she-panther's. The dazed Cimmerian saw between him and the onrushing death, her lithe figure, shimmering like ivory beneath the moon; he saw the blaze of her dark eyes, the thick cluster of her burnished hair; her bosom heaved, her red lips were parted, she cried out sharp and ringing as the ring of steel as she thrust at the winged monster's breast.

The low hanging moon, symbolising physical substance, the hunt, bounding deer in forest groves pursued by Diana and her hounds 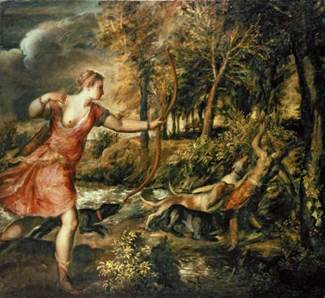 Titian, The Death of Actaeon

Uncertainties are bathed in moonlight which represents the eternal lifecycles that Man the hunter preys on. The sublimity seems all the more primeval since - as noted Pictorial 40 – the paradox is that two different things are happening that cannot be reconciled.

One is the physical, elemental and eternal lifecycle. The other is when dawn breaks on a new day and the dazzling sun moves in the sky with convincing strength. In the light of day you could be forgiven for thinking that’s all there was but, no, the world turns and you’re back in darkest night.

AGAIN dawn tinged the ocean. A redder glow lit the river-mouth. Conan of Cimmeria leaned on his great sword upon the white beach, watching the Tigress swinging out on her last voyage.(Queen of the Black Coast chapter 5)

Or darkest Cimmeria. If all that is just rotation (of Earth), what does that mean or imply? It means that two things are there at any one time, and rotation exposes you to both of the alternatives. What Vincent’s UVS says is that reality is paradoxical; to be honest, I don’t know if he means the same, but this is a type of paradox. Two irresolvable things are happening and, hence, the analogy is with the relativity of light (sun) and the absolute aether (moon). Both are there, and both are different.

A reflection (see prev) is 100% the same as relativity: light is the medium IN WHICH the reflection moves (electromagnetism). Hence, a relative world IS reflection; appearance and not physical substance or what is absolute (moon).

Physical substance is what is revealed in the chase, Diana footloose and free bounding over moor and mire. In Sir Gawain and the Green Knight the scenes of slaughter are almost indecently exposed:

Through the sliced-open throat they seized the stomach

And the butchered innards were bound in a bundle.

Next they lopped off the legs and peeled back the pelt

And hooked out the bowels through the broken belly.

But carefully, being cautious not to cleave the knot..

Then the shoulder blades were severed with sharp knives

And slotted through a slit so the hide stayed whole..

Then the head and neck of the hinds were hewn off,

And the choice meat of the flanks chopped away from the chine,

And a fee for the crows was cast into the copse.

Our bodies contain multiple symmetries, and the act of dissection exposes the internal logic of the arrangements. Game tended to be hung to dry and the fruity aroma would linger long.

Now, if you go back to Weird 11 you see BWS’s “The Enchantment” with its symmetry implying the other side of life on the far shore, the doppelgangers of the hero and heroine. As I remarked there, the meaning of figurative art is tied up with symmetries; left/right, up/down or into the frame.

Figurative art has meaning of that type, whereas abstract doesn’t. The meaning is tied up with fundamental attributes, such as vertical/horizontal or left/right that the figures assume. In other words, the meaning in a figurative painting is tied to the proportionate body, its athletic grace and allure.

Internally, you can see from the quote bodily organs contain many symmetries. What is always true, though, us that there is never total symmetry; for example, up/down is asymmetrical and entirely different.

Perfection of form, then, is what CL Moore calls “ambiguous symmetry” (Hyborian Bridge 17). Not only that, but the same applies to everything in nature. The sun and moon are imperfectly symmetrical, practically opposites.

Trees have an up and down – leaf canopies and roots - reaching towards the sky or towards the earth. Most things are asymmetrical up/down as they are tied to the earth, but there is still the symmetry of the four elements; earth/water, fire/air.

What is even more imperfect and asymmetrical is the cycle of lifedeath. Leaves fall off trees and go from the world of light to the underground world of roots and moisture. But it’s precisely the cycle that supplies the springiness of earth underfoot, the very springiness that Diana and her hounds eternally bound over in full pursuit, lustily bloodily in full cry.

Do you see where this is going? The rotation of the Earth creates a paradox where two different things are happening, sun and moon. The paradox isn’t anything to do with natural science, it’s simply to do with the ambiguous symmetry of the universe. It is primitive, elemental strength, of limb and of the ground we tread on.

It is cyclical. All things in nature spin – again, see UVS website – and that is the paradox. All things spin, and so are exposed to symmetries that otherwise would not exist, but they are not perfect symmetries (that scientists look for). They are ambiguous, primordial, elemental, mythical. That is why I say the night sky is an absolute because it is viewed from the standpoint of Earth, midway between sun and moon. The Norse term for Earth was Midgard. That is mythical and also an ambiguous symmetry; one of cyclical strength.

Aether may not be detectable by relative methods (CERN) but is symbolized by the low lying moon that ambiguously reflects sunlight, the essence of the primitive, the original and eternal strength that is given to the warrior and maiden who wander earth’s shores with lusty abandon.

If we live in the age of doubt (and fact) what is it that conquers doubt? Primeval reality. At the end of The Grey God Passes, one almost gets a sense that Howard regrets the passing of the ruthless old gods that come out of the Northern Lights.

“The Grey God passes and we too are passing, though we have conquered. The days of the twilight come on amain, and a strange feeling is upon me as of a waning age. What are we all, too, but ghosts waning into the night?”

The hero, Conn, revels in the slaughter, whose harbingers were the winged horses and riders.

He saw, as in a nightmare, the twelve winged horses and their riders, women in flaming silver mail and winged helmets, whose golden hair floated out on the wind behind them, and whose cold eyes were fixed on some awesome goal beyond our ken.

This is what you might call historical fantasy or an intermediary between historical adventure and heroic fantasy, and therefore the fantasy elements reflect Howard’s turn of mind on the historical events.

The sacrificial ruthlessness is old and strong, but on this day it is conquered by the reckless, sacrificial abandon of the new faith. Blood sacrifice is the common thread, and it is echoed in Howard’s tales of Outremer (Pictorial 11). InThe Sowers of the Thunder where knight and Saracen hew common cause against Turkoman besiegers of Jerusalem, Howard seems to espouse a brutal faith as against naked savagery.

Faith conquers doubt and in many ways is as primitive and lusty as the infidel hordes that besiege it. I think this is because the world of fact is inherently doubtful (see prev.) The primitive realities are blood and sacrifice and the blood red moon that is strong and elemental as the heart of Man.