“They’re paving over the world”, bleakly expostulates Harlan Ellison on one of his HERC CDs. Paving can be ruled by the order of society, and there is no sign of the changes that take place as the Earth gently spins through space.

This is the modern world in a nutshell that has no time for paradoxes that cannot be resolved by a logical mind. What I mean is the idea that freedom can exist alongside order. Freedom is strength and the ambiguous symmetry of the universe; seen in the painting of myths by such as Rembrandt, the Northern Titian. What is lost to paving is the basic texture of things that you see in the painting of Susanna bathing in her garden 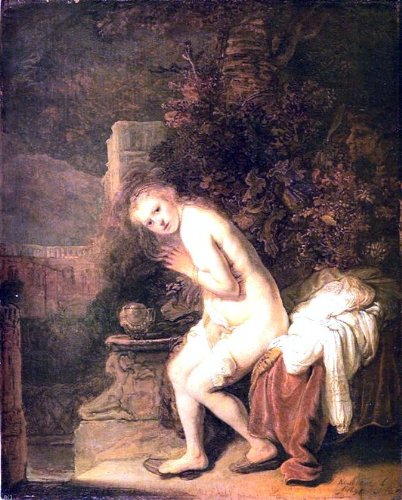 No straight lines; an interweaving of stone and leaf and bark; the human in the garden as at Eden. The sense is somewhat ethereal, starlit or moonstruck, her pallid flesh shining with lustre. As with many Renaissance works there is a sense of freedom and order intermingled; the pulsating power of nature untamed in the GARDEN OF MAN

To the quiet night

To Every morning sound

The substance of nature is ethereal; it is the dance of the faerie on moonlit grottos. They dance through scent and touch and texture of tangled growth. The lifecycle is strength and it cannot be set by rule-based systems of man. Dream, myth, the gay abandon of Dionysus on moonlit vistas. The false Apollo must flee or be struck down by the righteous sword of myth, a primeval strength that is eerie and alluring because born of delicacy.

When freedom and order are intermingled, the innate delicacy that is the substance of Man and nature is given free-expression. In Renaissance painting Man is still part of the world of the moon and the stars; in the modern world Man is alone in the cosmos. When I say freedom and order intermingled, go back to the city-state or the Hanseatic League (Hyborian Bridge 17). The labyrinthine intricacy of a Hanseatic seaport – the dim alleyways, sailor’s dives, ordure – is the expansive free-expression of Hanseatic order.

There is no such thing as pure order in the ancient world. There is strength because strength is expansive entanglement of the substance of Man with the substance of nature. Read some of CL Moore’s descriptions

He shouldered his way through the colourful cosmopolitan throng, the speech of a thousand races beating in his ears, the mingled odours of perfume and sweat and spice and food and the thousand nameless smells of the place assaulted his nostrils. Vendors cried their wares in the tongues of a thousand worlds. (Scarlet Dream)

In the city-state two things are side-by-side. Monumental buildings (order), and the expansive entanglement of free-expression (HB19). You know how Latin America tends to oscillate between popular left-wing governments and elitist right-wing governments? Both of those are a type of order. In Venezuela, Maduro would never think the Tower of David (Pictorial 30) was anything but an eyesore to be sold.

Americans are lucky to have National Parks, else Trump would be sure to pave them over! The idea of expansive entanglement of movement and grace in quiet spaces doesn’t enter into the modern equation because we live in a world of pure order. “They” – eg Brazilian Bolsonaro – will always pave things over because to them it is order. But pure order doesn’t exist: it’s just ego-weakness.

As the Earth turns it is alternately exposed to the sun (order) and the moon (free expression), the expansive intricacy of the natural world which cycles between light and heat, dark and moisture. This is the springy strength that Diana and her hounds bound across, the fertile terrain upon which Man the hunter assays their quarry.

Rotation exposes a primitive paradox which otherwise does not exist. This elemental situation is the starting point for myth, the legendary Odysseus rising to another dawn on the roiling seas of lyrical destiny.

The cyclical sensation is reality in the mythical sense, alternating between joyful clarity and dingy entanglement. One is appearance – vision – the other is reality – the physical substance of labyrinthine entanglement.

We who live in the world of appearance (the false Apollo) have lost sight of the old gods of dark entanglement who give strength, shape and texture to the journey between life and death. Myth is strong; appearance alone is weak. Why is it that space-faring exploits seen to speak of a barren cosmos? For the same reason that a car racing along a smooth track appears to be still (Cosmic Curmudgeon “vanishing point”).

There are two universes; one is relative (sun) and one is absolute (moon). In the relative universe you will be chasing technique forever because you are forever going towards the vanishing point. Yes, it will appear brilliant and convincing, but the end result is still the same. A silent cosmos. The more the likes of Musk chase, the more silent things appear – they are forever chasing the vanishing point (technique)

There’s a very long car sequence in Solaris (Cosmic Curmudgeon 2) through tunnels and over flyways, always staring at the vanishing point. I got the impression the long journey was essentially going nowhere. By contrast, the dreaming planet, the mysterious chameleonlike Natasha whose psyche is powerful and whose physique indestructible.

Technique is like a reflection: ultra-convincing, relative and illusory (vanishing point). However big the rocket and however intrepid the journey, they are still heading towards the vanishing point and away from the absolute, the ethereal – the woman of

Only when two different things are happening are we back in the world of myth and not illusion. When the rotation of the Earth creates apparent stillness, and we see the face of the true cosmos – the dawn of a new day, nightfall. The primal forces are simple; the universe in its reality has a certain abstraction. A thing of beauty, power, strength.

WHEN THE EARTH MOVES AGAIN

To quote Grace Slick on “Garden of Man”

They’re the only names

In the combination games

The ancient city-state is a scene of fantastic contrasts, monumental and dingy intermingled in the same proportionate space. The contradictions have the internal logic of a labyrinth – ethereal and absolute

The contradictions of the modern maze suffer from exactly the reverse fault, since logic has no proportion and therefore no internal logic (Corneille The illogical borrows from the logical Pictorial 2). They are heading forever toward the vanishing point of technique, psychotic AI, psychic weakness, which may explain why in films and sci-fi stories AIs are often portrayed as existing in some eternal subterran nothingness (Alphaville, I Have No Mouth and I Must Scream).

The universe as an abstraction of cosmic balance is like something from CL More’s fantasies. The entanglement of Man with the cosmos, light and dark, ethereal luster of the eternal woman, the far-flung adventurer.