The distinction between the Wild West and modern mundanity can have the appearance of reaction. The casual use of stereotypes seems to be common to CC and Howard, who was overly familiar with wild stories of those pioneer days, of coppery shadows and tinkling cowbells in the mesquites.

CC’s outright condemnation of modernity is reminiscent of R Crumb (another old-timer).

“..everybody’s so much alike that they might as well be in uniform” (which is what Crumb said of the demise of the hippy era! In every other respect they couldn’t be more different). Traditional stereotypes are reactionary or, in other words, use race or class or sex in typical ways. To a traditionalist that is order, and the other way is

It’s a strict sense of propriety and order, encompassing language and grammar.

“The people that are on the wrong path, wilfully doing things that have been proved to be, over and over again, deleterious and destructive.. The same as you see in land developers when they move in, cut all the trees down, and cover everything in concrete. That’s certainly not how they improve things.”

The sense of propriety has an almost cosmic sense of order, so it has to be somewhat non progressive. Howard is known for coming out with casual racisms, such as,

Much as one may hate the red devils one must almost admire their reckless courage—and it took courage to drive a raid across Red River in those days! (“Beyond the Brazos River”)

I personally don’t think these things matter as they’re historical utterances; what does matter is the language of poetry; the grey land evoked of red and white alike.

The countryside is unusually picturesue—broad, rolling hills, thick with mesquite and scrub oaks, with the river winding its serpentine course through its narrow valley. On the slopes cattle and sheep graze and over all broods a drowsy quiet. But it is easy to resurrect the past in day dreams—to see the adobe walls rise out of dusty oblivion and stand up like ghosts, to hear again the faint and spectral bugle call and see the old corral thronged with lean, wicked-eyed mustangs, the buildings and the drill grounds with blue-clad figures—bronzed, hard-bitten men, with the sun and the wind of the open lands in their eyes—the old Dragoons! Nor is it hard to imagine that yonder chaparral shakes, not to the breeze, but to crawling, stealthy shapes, and that a painted, coppery face glares from the brush, and the sun glints from a tomahawk in a red hand.

The alternate future is a revival, which seemingly would be reactionary; at the same time it has a cosmic sense of oneness in evocations such as this. The ancient land exists outside the world of technique, and so there will be bound to be a brute, confrontational rawness in the people. Man, horse, woman, homestead, Indian village, store, grain, harvest, rain.. There is a dreamlike freshness in a land where there are few rules, few straight lines, erratic times, wayward lives.

The confrontational aspect of life can be seen in old films. At the same time there are bound to be crossover aspects, the Calamity Jane type, intermarriage.. From that brief rundown, the image I want to convey is of bustling productivity without the crass materialism of the conventional future envisaged by some. We happen to live in materialism but, where there is a certain abstraction, life is governed by symbols – the castle, the high chaparral, the horse, fertility (see Bardot, last 3 paras. )

In a wilderness situation, symbols come into their own because abstraction is in the very air, the scent of mildew. All is haphazard, but order is hidden in the dusty dusk. It’s a land not of bright lights but of days and nights, the lusty trail of yore. If you suppose this land (ie Yellowstone) to be surrounded by the other future, what could we expect there? While the National Parks remain an abstraction, a vison, the domain of fact does without abstraction, which is the dream of the universe.

The land of abstraction can be frightening; Man dreams up religions to impose rules. It’s when rule is all there is that the dream vanishes. As I’ve been saying for awhile (Alternates 8 para 10) irrational knowledge provides psychological strength. The desire gives rise to a vision; the child learns language from picture, and thinking through language.

Instead of strength, straight-line materialistic progress breed mundane psychotic nightmare. It’s not just Trump and Bannon, though they’re bad enough, it’s the entire political class that impose fact-based rules and thereby banish abstraction to designated areas like Yellowstone (fenced-off). Abstraction is the dream of the universe. In America that dream is still there if you look hard enough, go on a road trip though the half-forgotten past.

There’s a very long car sequence in Solaris (Tarkovsky 1972) through tunnels and over flyways, always staring at the vanishing point. I got the impression the long journey was essentially going nowhere. By contrast, the dreaming planet, the mysterious chameleonlike woman, indestructible, that could be an alternate future (see Caza, prev.)

A future that is rule-based is going nowhere for that very reason. One doesn’t need rules to exist in a homestead, to build a corral. The homestead scenes in La Belle et La Bete (National Parks) are a gaggle of lusty larks, not just human but goat, chicken, the imposing circus mount Magnifique. Cocteau filmed the contrast between the social mix of the home-patch (filmed to resemble Vermeer) and the Beast’s magic domain, where “we count not time.”

There is a contrast but the two can still overlap; dreams are not verboten. That land is frightening and psychologically Dionysian. Blood and lust. Living in a homestead, the animal life that surrounds one would persistently remind one of that. If there were wild boars in the forest they would be another reminder of the dream of the universe. That land is much more of an abstraction. It’s not rule-based but desire-based. Birds in heat.

The land is pictorial, less word-based. As Jean-Luc Godard says of film the picture comes first; modern films are “text”.

Well, enough of film! Mundanity is psychotic because you don’t need rules for living; you need psychological strength, irrational dreams, desires, visions. All of that is abused by a fact-based political world, so one establishes an alternative.

Even if there are no rules there, there is law and the establishment of law and order is a chief criterion (Alternates). People have asked if there will be services in the new territories, and anything can be brought in provided the people conform to wilderness standards. It does occur that the likes of Trump could be scared, and so surround themselves with the bright lights of inert matter; the robo-future of facts and figures as envisaged by Bezos, Google-drive and others. To someone like Trump, that future could make sense materially, but there is no abstraction, no dream and so no psychological strength, only weakness.

Strong content and strong style (Alternates 7). The alternate future is wild and raw. Abstraction can be scary and that’s what classical myths are all about. Daphne of the laurel, Leda and the swan, the beast within. 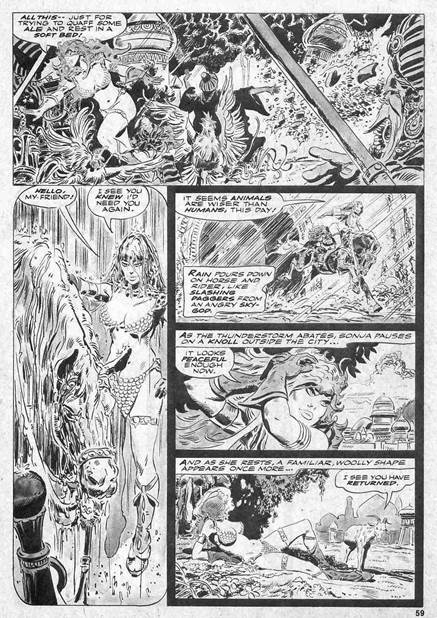 Wizards of the Black Sun, Savage Sword #23 by Noto/Thomas/Thorne © Marvel

Claire Noto is famed for her animal wisdom. The Unicorn of Red Sonja #1 and here a goat deity

If the world in its reality has an abstraction that is something one can embrace. It’s not all bright lights but there is strength and endurance. The alternative is Man-like made in the shape of a robot, a thing of fact not fancy. The west, by contrast, is manlike, manly but not strident; womanly but not plastic. A song from the classic QMS album Happy Trails might fit. Note the western motifs (variations on Bo Didley riff).

WHICH DO YOU LOVE (FREIBERG)

Howard’s berserker nature found comfort in a world made of image, not of fact. Carven image of satyr as well as noble brow of king. The revivalist notion of the old west would bring back bestial images onto the lonesome (or not so lonesome) trail. It’s frightening and fairly filthy but far from mundane. To be frank, boredom is far more frightening, especially when it’s psychotic and laced with poison-facts.

This makes it clear that mixing words with the establishment is a poisoned chalice. It’s not about words it’s about action. Then there will be words but in the final analysis the law and order – either theirs or ours – has to prevail. That’s not about talking-heads, it’s more to do with muscular virility! Not martial law but manliness; not stridency but strength in the image of moral force, the homestead, the haphazard line, the design for living with strong style, lust and lasting order, symbolic not factual.