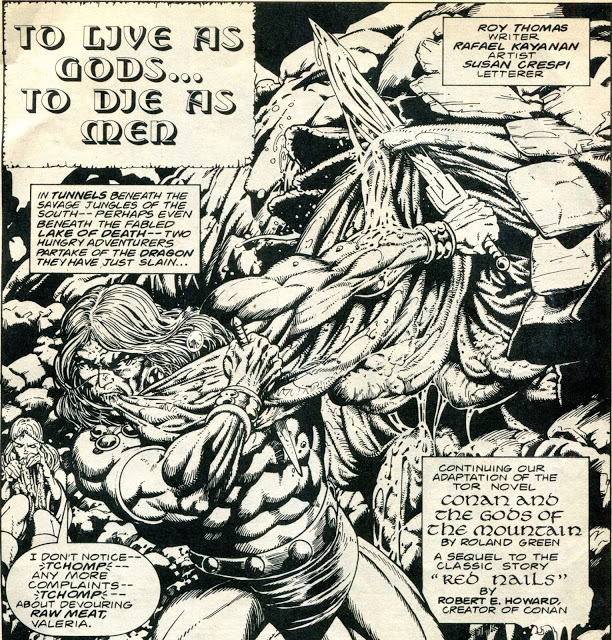 Conan and Valeria are here tearing off pieces of dragon-flesh almost like carrion-feeders. However, they did kill the dragon (in #211) and hunger is forcing them to eat their fill.

Later Valeria will wash, acting almost like the Maenads (prev.) who will tear raw flesh off the goats and livestock they kill and, when the frenzy has subsided, calmly wash in tranquil streams.

Valeria is no Maenad, she is merely trying to survive, which makes the case that survival is not a hygienic activity. Valeria acts like a Maenad because she is in the wild, hunting.

The wild state-of-affairs is healthy for the reason it exposes the immune-system to naturally occurring  strains of microbes. Valeria and the Maenads are just being slightly more extreme than women who trod the fields in pre-industrial times. Soil microbes - or dirt - are the most health giving substances found in nature and germs teach the immune system to make useful antibodies.

Dirt is also healthy because what it means is the environment is friendly to microbes. The opposite tendency is to sterilize the environment and make it unfriendly to microbes. The danger is this leads to one-off developments that can survive and are resistant. Hence, dirt is a balance since one can ingest dirt and then clean it off, helping the immune system response. Sanitation is unbalanced and can produce hardy strains (that we are not exposed to in dirt.)

It seems likely that corona is a result of too much hygiene that produces an unstable environment that can breed a resistant strain. Once in that unstable area, the only treatment is more hygiene, so there is a vast distinction between hygiene and health!

The idea that things are the opposite to what "they" tell us comes into Jean-Luc Godard's Tout va Bien (prev.) The industrial scene - here a sausage factory - is there so that people can sell and buy goods in shops. In the film, the impression one gets is that the conditions inside the factory are the same as the ones outside the factory. There's a sequence of assembly-line pop, and at the end one of Godard's trademark extended pans of about 13.333 minutes to-and-fro at a supermarket checkout.

Fonda is finding that her opinion pieces as an American correspondent have a pompous falsity, and she and Montand have an argument about their assembly-line lives together. Food, sleep or sex, cinema. The closest link to the factory here is that she produces a photo of a woman's hand holding a penis, her mental image of them. "We are headlines", she asserts (rather than a story).

If that's true, what is the story? Maybe it's essentially one outside the factory assembly-line, to be more like the animals skipping round the fields, and with the microbes in the soil. That's putting it in a very primeval sense since it's exactly the primeval that "they" don't like to talk about. The primeval, or the world of line and sinuous movement, is nature that is not a headline. The world that gives strength and health, especially to children running free and filthy, bare-foot on Mother Earth.

The bodily strength and immune-response are known to affect mood, so from very primitive origins comes a whole universe of psychic grace (see Japanese anime Macross Frontier) Nowadays (50 years on) we are living in the sausage factory, a controlled environment that has to be kept sterilized - and therefore weak, Our immune systems are run-down, microbes becoming resistant - and those are the "facts".

They are the facts of an experiment in hygienic living alongside electromagnetic appliances. Everything is numbers and figures; nothing is bodily strength in the fields with the animals. Dionysus is denied entry to our factory - the one foreseen by Bacon's The New Atlantis (prev.)

The head that is full of figures is unaware of the strength that comes from action in the field. Man hunts; Man domesticates animals; blood, carrion, entrails, meat. The ecology of action has a female harmonic of fertility.

In the field, the ecology of predator-prey covers a healthy dynamic. This is the ecology Man had well into the industrial era, since it mainly means nothing is sanitised; there is a lot of filth and therefore a stable dynamic of predator-prey, of microbes in the soil we are exposed to.

The essential point is that in a healthy dynamic something is there. The microbes we are exposed to teach the immune system to make antibodies; nature is all about molecular shape - not information.

In a factory, the opposite is the case, Everything is information (numbers, figures, flow-charts). Everything is sanitized or sterilized for the sake of efficiency, and hence nothing is there in the ecology.

An ecology is a balance of predator-prey (pathogens-antibodies) which is all about shape. Sterilization takes away all the shapes (mictobes) and you're left with nothing ecologically.

"They" confuse this with cleanliness, but it's not. Cleanliness is a balance of dirt and washing (as Valeria). A balance is necessary for the body to gain strength through dirt. When the body and immune response are strong, we can have health and be clean.

The factory is an inductive environment of numbers; an ecology is a fertile environment of shapes (the feminine principle). Where there is fertility there is going to be dirt because it means there is something there. Creatures, living material on Mother Earth.

Man lives in proximity with the creatures that strengthen immune response. It's a case of finding a balance. Vermin is too much filth (the Plague), but hygiene is not enough.

What takes place outside of the factory is essentially reality. The strength of the primeval serpent. The serpent is outside the headlines - which are "facts" - and is simply line and movement.

Perhaps Fonda's photo is a picture of the sexual become numerical - or a part of the assembly line process rather than a dance? From the thoughtless cosmic dance comes a state of grace whereby words have meaning. Perhaps that was Fonda's writer's block, that she was stuck in the world of headlines?

The supermarket checkout sequence has a mechanical ring that is pretty inoffensive really. Since that was 1972 it could seem that people back then were detached from the mechanical, whereas the contrary is now thought to be beneficial. Whereas in 1972 there was a battle being waged by "les Gauchistes", now the machine has won apparently for the betterment of all, so there is no battle?

Yes, but in that case the primitive dance in the filed with the horse-and-cart has lost, and it is that which gives the strength and health on which original grace depends. I know it's primitive-sounding but you're essentially arguing against reasoning words - headlines - with what is a dance, a dance that partakes of a cosmic harmonic. A dance affects everything. Towards the end of the film Fonda's voiceover goes

"To change everything, where do you start?