They are saying to one another: Let us make an end

Of those ill-smelling tribes of men, these frogs that can't jump,

These cocks that can't crow

These pigs that can't grunt

This flesh that smells

These words that are all flat

These white men, and red men, and yellow men, and brown men, and black men

That are neither white, nor red, nor yellow, nor brown, nor black

But everyone of them dirtyish.

Let us have a spring cleaning in the world.

For men upon the body of the earth are like lice,

Devouring the earth into sores.

Are discussing with one another; they are making ready to start. (Quetzancoatl Looks Down on Mexico, chapter XVI) 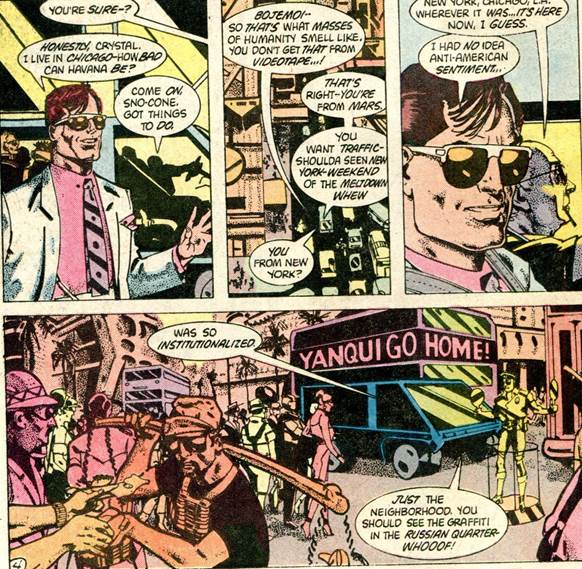 Physical and racial reality fizz with exciting contrasts. This must be why Chaykin’s Flagg reads like a 20s throwback - as it does stylistically - so this is one more similarity to The Plumed Serpent.

In fact, this brings in yet another similarity

'I said: Go thy way, for the dust of earth is in thy eyes and on thy lips. For me the serpent of middle-earth sleeps in my loins and my belly, the bird of the outer air perches on my brow and sweeps her bill across my breast. But I, I am lord of two ways. I am master of up and down. I am as a man who is a new man, with new limbs and life, and the light of the Morning Star in his eyes. Lo! I am I! The lord of both ways. Thou wert lord of the one way. Now it leads thee to the sleep. Farewell!

'So Jesus went on towards the sleep. And Mary the Mother of Sorrows lay down on the bed of the white moon, weary beyond any more tears.

'And I, I am on the threshold. I am stepping across the border. I am Quetzalcoatl, lord of both ways, star between day and the dark.' (chapter XV)

Venus, the Morning Star, signpost of the Earth-spin, the eternal cycle of the seasons and the rains on the plains (of Spain and Mexico). Quetzalcoatl is not a “linear, progressive” god, like it seems Christianity may have become (prev.) He looks two ways, or you could say to the past as well as to the future.

Often looking to the past gives a clue to the present and future. This was surely Chaykin’s motivation for using hair and fashion from the 20s. The flapper zest gives a devilish sophistication to the future milieu.

It also seems to be a good way of instilling charisma in many of the characters – women and men – another theme of The Plumed Serpent.

Yes, sexy sophistication – male or female – and a degree of racial stereotyping (a la CC Beck Pictorial 63) are good counters to a modern order of basic uniformity regardless of race or place (east, west, north, south).

The underlying reason for this is the dollar is the symbol of straight-lines. Any country which advances adopts straight lines; so China is rapidly uprooting independent peasantry and retransplanting into apartment blocks. 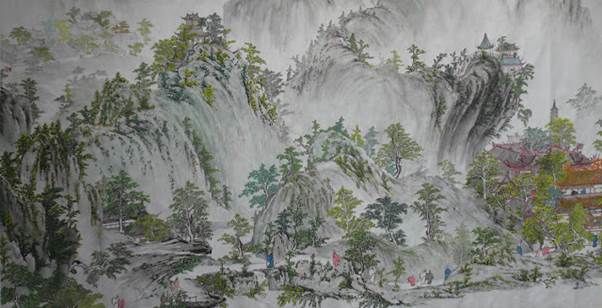 The vital and fluid, fiery lines of traditional landscape painting; Tao and the Chinese Dragon. What “they” term advance is simply an illusion of straight-lines. This makes it very convincing and a readymade resource for technology (the electric green future Tales of Faith 2 Babcock Ranch)

The vital and the fluid and the fiery are the physical as well as the racial reality of life on Earth (under the stars above, natch.) You only have to look at any bit of electioneering, and it’s all the same dollar bill.

Pete Buttigieg, the mayor of South Bend, Indiana, accused Mrs Warren of having a “multitrillion dollar hole” in her plan, making thecountry “even more polarised” and wanting to engage in “infinite partisan combat.”

Other candidates criticized Mrs Warren over her plan for a “wealth tax” of 2 per cent on individual income over $50 million. (DT)

I could have picked Boris Johnson – it’s all numbers in our system of dollar hegemony. But the dollar is physically zero. It has no physical reality (not even gold – see Hyborian Bridge 6) The only reality it represents is the illusion of straight-line advance (into the sun – Icarus). This makes it convincing to acolytes.

Politicians speak the language of acolytes extremely glibly – either because they’re genuine believers or they’re just glib! The language says we are in a perspective illusion of straight-lines which is symbolised by the dollar (capital).

Back in Hyborian Bridge 6 you see that originally (16th century) money was used to exchange goods – mercantilism. The money symbolised the exchange of goods. In other words, the value being exchanged was in the goods: the silks, fruits, spices.

The value was not in the money; money was only a symbol. Only goods have proportion and beauty; money has very little. But nowadays, money does have value in that it symbolises straight-line advance (of the wormdollar Pictorial 50/2)

The value of straight-line advance is that it is an illusion that is convincing through the language of acolytes. Straight lines are conducive to techniques aimed straight at the head. The problem is, straight lines represent cities. This goes back to ancient Rome (Hyborian Bridge 2) and their cities that were laid out in grid patterns (as are US ones generally). The same applies to other ancient cities.

I was reading about Funan in Cambodia that about 700 AD was established as an Indo city-state with strong trading routes to the coast. The Hindu enclave sent emissaries to China and may have facilitated the spread of Buddhism. The city was laid out as a grid; but of course a city is just one side of the case. The other is the geography, wild life and plant life.

If you look at one of the EC sci fi by Wood or Williamson, you often see edifices in savage locations and that is exactly the case with ancient cities. 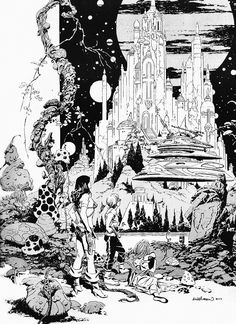 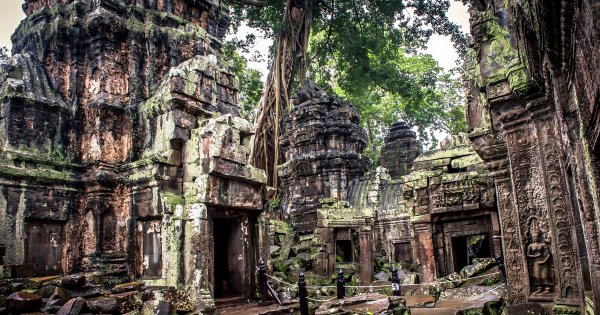 Same for Mesoamerican settings. The savage truth is that savagery is the innate state of nature – paraphrasing Howard. Savagery is strong and vibrant with the lifecycle of countless things. The savage dynamism of such ancient kingdoms can always be linked with fascism to those “ill smelling lice” of the modern persuasion (see Pictorial 70 on American Flagg!)

Human beliefs are not the beliefs of the city – which is a type of illusion. They are beliefs that reconcile the savagery of narural lifecycles. Not all beasts are savage; some are humble. Flowers are gay; bees are joyful addicts.

Beliefs reflect an unconscious sense of destiny beyond order and beyond human law. At the end of Hyborian Bridge 6 is the belief of Kukulkan as a cosmic cycle, which is not a belief in the stock-exchange as a human destiny!

“Stock-exchange” means trading in money, while originally it meant trading in goods; this is the illusory reality that has no reality because money is valueless. Its only value is as a symbol of straight-line progress.

This “value” is then sold by acolytes (politicians) even though it has no savage values of land, water, wind, rain. Natural strength and natural justice outside of the cities of Man.