One of the saddest songs in opera is Dido’s lament from Purcell’s Dido and Aeneas. I was listening to an expert program on BBC Radio 3 and the guy was saying Indian Ragas at sunrise start from the same semitone; it’s a sadness that connects to the god. Sadness connects you to your destiny, to the fortune that is yours through fate.

You might say that’s extreme abstraction; or you might say it’s the history of mankind. What is illusion is reality; the reality of ancient Greece and Elysian fields. Life without fortune is therefore not real; it’s a parallel reality of facts born of a corporate logo.

Heidegger’s use of “being” refers to the sense of existence that goes beyond mere technical fact, so is quite difficult to describe. It might be described as a balance between technique and direct expression – something like Bruce Lee’s philosophy of Jute Kun Do (CH 9). Without the direct expression there is no “being”, and being is absence of technique.

The balanced life quite well describes Indian tribes, since any techniques they use are much more connected to their direct experience of “being”. Classical artworks can be described as a balance between the technical knowledge of form (order, proportion) and the pure expression of Dionysian lust. Without Dionysus they are worthless as art.

Dionysus is gaiety but also reality or physical decadence. Thus is fortune spun. Tribal people often say that without tradition they cease to exist; one way to describe this is that they exist technically but with no sense of being. Their fortune is lost. Meanwhile, we are being sold a false future of technical gadgetry where even death is only a concept. This parallel reality of no sadness or gaiety is indeed a living death by fact. The facts of reason applied to pleasure, or “effect”.

“Effect” is resolved space and, in case you don’t know what I’m on about, here’s an example of irresolvable space 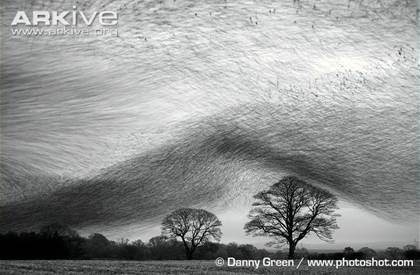 What I mean are irresolvable opposites; the world of action that is both freedom (individual) and order (society). The world of Greek tragedy that cannot be resolved by facts. It has psychic thrust and physical power. This world is represented by a type, the introspective adventurer of Weird Tales lore.

The introspective adventurer is connected to the unconscious; sadness is theirs but also gaiety for their spirit is free. The balance of freedom and order which consists of irresolvable opposites and is at the foundation of Greek classical culture goes completely counter to a culture of resolved “facts”. Irresolvable space is a type of low-level fight or feud between individuals or communities, and in that way one resolves differences. The typical painting of the West, in other words (or medieval feudalism).

Now, you might say Trump’s White House is that and I think it might be, if he wasn’t infatuated with the worm of ego-lust! He is merely the servant of a dollar which is counter to psyche and physique (power). Likewise with Erdogan of Turkey who had his own feudal trouble and immediately  sought to dictate a single world-view. The same may be happening with Mohammad bin Salman’s modernist view of Saudi Arabia with its untold wealth.

There is a dictatorship of the dollar, or of resolved space (having a single view of facts) since both amount to very similar things. Being contrarian, a theocratic state like Iran has less dictatorship of markets and more behavioural freedom! It’s ludicrous to align them with N Korea – or even China.

The single world-view symbolised by the $ goes counter to irresolvable space, or the balance of freedom and order in the human psyche and physique. Our political masters are neither necessarily stupid nor clever; they are more like disembodied heads; alien spearheads from some Martian plateau, planet of neverending war and struggle, not matriarchal grace and lofty serenity. 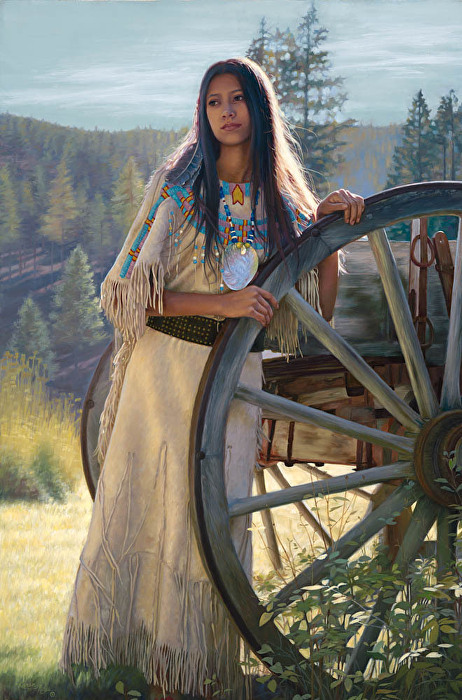 Word is that Oprah is heading for a Democrat clash in 2020, so we are set for a neverending factoid/entertainment showdown. If that is the way of the future perhaps the time has come to say it is heading away from “being” at an alarming rate! Being is something that is non-technical, so it cannot be factual or round-the-clock news, or “effect”. Being may be hard to describe, but it has a psychic thrust and bodily power. The DT is currently running a column by Charles Saatchi on great paintings and has some interesting notes on Durer’s self-portrait of 1500 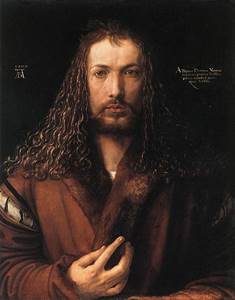 Durer, says Saatchi, was openly influenced by the Renaissance masters Mantegna, Leonardo and Bellini, and in his work he employs the unequivocal sensuality that the Venetian Bellini had brought to his painting of the dead Christ.

That parallel is easy to follow, and is an assured example of Northern Renaissance technical accomplishment. Saatchi goes on to describe Durer’s mastery of woodcutting and copperplate, the latter are a personal favorite 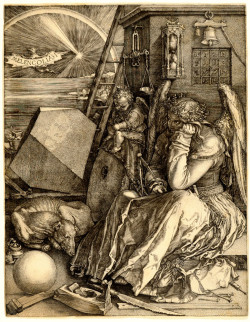 Melancholia. Durer may use the geometrical shapes to represent Renaissance advance, rather than incorporating geometry into the composition. So, taking a still medievalist perspective. 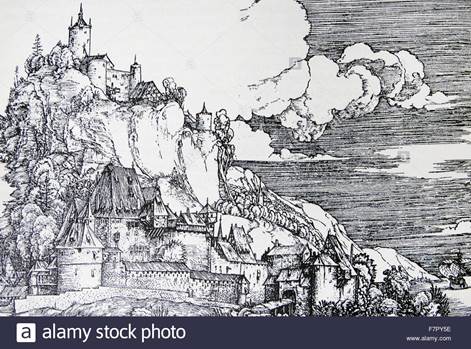 Where Durer’s draftsmanship and technique are undisputed, his painting lacks the zest of southern Renaissance masters, and the question is, why? Everything technical is there, from proportion to fastidious workmanship, so it has to be the actual idea of being “painterly” – see Pictorial 1 “Judgement of the Dead by the Living” where I say that Leonardo was “an artist who was more technically accomplished than painterly”. Actually, this applies to a much greater extent to Durer! Some of Leonardo’s paintings, such as the Mundi, dazzle technically to the extent of almost appearing unreal. The remarkable presence of a face that is less that lifelike.

Is that technique or painting? I think it has to be both together, since the presence is a painterly quality. Durer has adroit technique but not presence in the same abstract sense (geometry), also as in Caravaggio’s chiaroscuro.  The thing is, this is now getting very classical since presence is what the great, technically accomplished sculptures of classical antiquity have. On the one hand are proportion and anatomical rendering; on the other are zest and lustiness of line and expression.

This is a classic syndrome that there are two aspects to a work; Apollo and Dionysus. Durer, from this perspective, is almost pre-Renaissance even though he uses the techniques of Italian Renaissance! BWS, for example, is much more Italian in sensibility.

You could say this is a Northern European syndrome, to be more factual and less zestful. The arch-classicist Nietzsche is very faithful to the ancient Greek ideals, so you could easily say he was less Germanic than is made out (by those who presume supposed anti-Semitism, say). The basic point of all this is that facts only get you so far. Saatchi has a “factoid” column which is fine; it’s just not a classical one! Now we are getting “factoid/effect” politicians and further away from ideals of balance in life and art.

I mean balance between the individual and the society, so facts are not thrust down your throat for “effect”. If society were more feudal and unresolved (by facts) differences would get resolved by feuds – low-level fights, old-fashioned arguments, not necessarily duels. This is what you see in old pictures like The Beautiful Blonde from Bashful Bend (Grace Slick ) and could easily be what “being” is about. The resolved state is just a state of perpetual nothingness; no balance, no proportion, just endless diktats, “factoid/effects” (tweets)

The unresolved state of balance, between men and women, freedom and order, is a very classical notion. It’s a state of action in which there is no resolution to the argument (as a footnote to the “me too” storm, Anne-Elisabeth Moutet in DT has a nice comment - In America they tend to live in a black-and-white world, a binary universe of ones and zeroes. That’s perfect to build computers – and stands up for galanterie and la difference).

We seemingly live in a complete imbalance between body and mind, and so notions of   symmetry and proportion are nowhere. But, as was stated with respect to BWS’s “The Enchantment” (Weird 11), figures in the landscape and their subtle symmetries are the content of the painting (meaning, epistemology). There are two things present in the painting (content): physique and psyche (power, ontology). Physique has power that is expressed in the symmetrical rotation of limbs. In the painting, the warrior is in repose and seems touched by psychic weakness while his body exudes formidable reserves.

This type of baleful image of a warrior held in check has a heroic simplicity that goes against the modern grain. The body that is expressive and attuned to the psyche. Since the powerful physique represents ideal balance, this type of painting is very un-modern. Where modernity has become more detached from the body as a basic physical reality, the exact opposite is true of the early West, Indian and settler.

The famous opening scene of Ghingachgook and Hawk-eye in Last of the Mohicans, for example, where they are disputing the origins of Indian feuds. Fenimore Cooper describes their fantastically picturesque garb in inordinate detail and notes that, while the Indian caries a short-barrelled musket, the Scout’s powerful long-barrelled rifle is propped on a tree. Since that’s the main difference between them, it’s obvious they are both a “type”. The type that is active in unresolved space (wilderness) as a hunter or a warrior. The type where physique is attuned to the psyche in romantically expressive ways. Their reality is much more physical but, by the same token, their physicality is much more psychic.

I think there may be a comparison with Durer that might be worth making here. If you look at “Melancholia” the Renaissance advance may be heralded by the geometric shapes, while the hourglass reminds one of mortality and medievalist notions. In the scene of Hawk-eye and Ghingachgook, the rifle laid aside may betoken “advance”, while the wilderness types still live in the old time-lost ways.

If you think about it, resolved space is geometric space, whereas wilderness is irresolvable. It’s not just that our entire societies are now geometrical, but even the ways we think with computer bits are! There is a type of being who is comfortable with that, and it is the political, or what you might call “Martian envoy” type. The original Martian canals, resembling cerebrum or grey-matter.

I’d best explain what I mean as it’s no joke! When a political head resolves space through facts, it creates another space; this is Martian space or a type of maze of fact. The heads which are comfortable in this space have no sense of balance or proportion; in that sense the head is not proportionate to the physique (body – see Weird 15). Resolved space is that great shining future envisaged by Musk. The argument comes down to: are we geometric beings like a computer or are we physically/psychically irresolvable?

I wonder if Durer felt at a similar sort of crossroads in his copperplates? I think Howard has things to say in his Hyborian Age, where man-made artefacts merge into the landscape like age-old relics. This again could relate to Heidegger’s use of “being”, the poetic sense of presence arising naturally.