“Machines were mice and men were lions once upon a time; but now that it’s the opposite, it’s twice upon a time…” Moondog 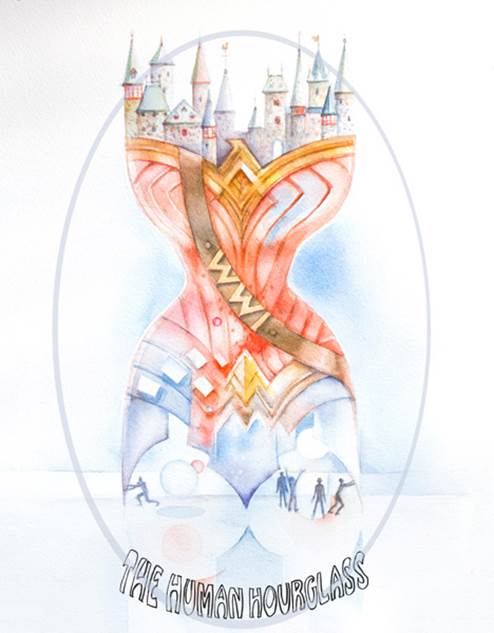 From historic romance to parallel realities (based on Wonder Woman movie)

You may have batted an eye at the relating of Durer’s Melancholia to the modern condition? It’s more of a hunch, and a sense that myths are called into being by the musicality of nature; a source of providence that springs from life eternal. Such is fortune, and such is the Hyborian bridge that links Howard’s heroic fantasy to previous eras where psychic aura and differences wrought strength. The Hyborian bridge takes us back to a world of psyche and physique, and not of logic.

The strength of medieval faith has a belief in the destiny of the human soul. In the great unknown, faith makes us fortunate beings, figures in nature and not just factors in a computation. People tend to have to believe, so if they can’t believe in fortune they’ll believe in something that’s anti-fortune; the world-devouring dragon of ego-lust. This is something akin to the “Anti-Life” formula alluded to from Forever People #3 (Pictorial 9). You wonder if the medieval Church foresaw a type of Anti-Life in the dawning of the new age? It’s not that I’m an apologist; it’s that all human beliefs prior to the modern era exalt human physique and human psyche above mundane matter. Our destiny is to die and to have a fortunate destiny is no small matter!

What is fortune? It is the triumph of life over death; the mystique that we find in Howard’s tales such as “Queen of the Black Coast”. We are told not to believe in mystique, just so that we can believe in something else, like Anti-Life. Everything is a belief; it doesn’t matter what “they” say. It takes strength of will and sinew and psyche to believe in life and not Anti-Life (Pictorial 1)

So, how does Melancholia relate to Anti-Life? Again, it’s no more than a hunch, that geometrical shapes are machines and that incorporating them into human physique signifies a death of psyche, the death of fortune. To believe in fortune as a psychic entity that may or may not be God or the gods. That is the glory of human history and it is pure belief, as is our belief in the exact opposite!

To give an example, in Wonder Woman the movie, Diana is convinced that WWI is the battlefield of Ares, god of war (Mars) and, of course, they tell her it’s human corruption and all that jazz. In the event, she does battle Ares. Perpetual war, the maze of geometry, neverending manufacture, the tyranny of fact. Because fact, parallelism and sameness are all products of the maze of geometry, and the end-product of geometry is Anti-Life.

Added to this is the psychotic demiurge – the dragon of ego-lust – that attaches itself to Anti-Life. The dragon is trapped in the maze – we see this in the Musks, Bransons, Bezos’s waxing lyrical about an ultra-geometrical future where the actual rationale for existence of the psyche and Dionysian expression is lost in the mists.

The basic point is the Italian Renaissance saw geometrical and anatomical knowledge, combined with Dionysian expression second to none. Such is genius, but behind this wild, lusty expressiveness is the integration of human with geometry. Take away the expression and you have a machine (cyborg). Melancholia may therefore be a foreshadowing of that event in the post-Renaissance (where we are now).

The obvious idea with Machine Man is he’s much less of a machine than Sunset Bain and Baintronics Corp that threw his spare parts away (#1). The Wreckers reassemble him – a hip band with an affinity to Kirby’s Forever People (Kirby originated Machine Man in the 70s). The story of revenge against corporate brainwashing, vidiots and robo-servants is set in what is becoming reality.

Why is Machine Man set against this reality (of machines) and what is it that Machine Man has? The answer is Dionysus – the lust for loving and fighting. So it is more of a Greek tragedy than a futuristic machine. Hope, fate and fortune – without the gay god Dionysus they could not exist. No stories, no zest. So, how has Machine Man got this? It’s a mystery!

The mystery of sublime primitivism without which the human head becomes merely a subsidiary to a geometrical maze. I noticed the Chinese are crowing about cloning two monkeys; the truth is it’s an unsafe, ridiculous waste of a good monkey when people are already cloned by social media and the sameness of a totalitarian maze.

Mad logic. Resolving differences through action has a type of logic. The logic of the hunt; of Diana in full flow over hill and dale; the logic of the commune, and you could quote Corneille here, from Le Mepris (see previous):

Fritz Lang: It's logical and the illogical borrows from the logical. Your Corneille said it in his preface to "Surena."

Camille Javal: [voice-over] I've noticed the more we doubt, the more we cling to a false lucidity, in hope of rationalizing what feelings have made murky."

The commune, like the human physique, is an illogical construct. Ideal form; a product of opposing forces. This is super-obvious in old-time American pop-culture artefacts like Lil Abner, The Waltons or The High Chapparal. The interest – and balance – gained is from opposition of all sorts. Spanish, gringo, hicks, city-slickers, Mammy Yokum, superpowers, beauty, “G'nite John boy”

The irresistible allure of a hunting woman in free-flowing attire is a very classical concept, one BWS rendered in his mezzotint “Judgement of the Dead by the Living” - Pictorial 1.There is a strength and glory that is so lacking in the finicky fashion of today (excepting my fave, Jean-Paul Gaultier, who also has an eye out for men). There is something like the opposing syndrome of Red Sonja where there is lust but also the chaste maiden that I think you find throughout the Middle-Ages.

BWS's painting might be what he calls a “failure” but the vital sense of pure physicality is pretty awesome. The glory of the accentuated human figure in nature is something we have lost, yet in many ways it represents the psychic history of the human race, whether Biblical, classical, medieval.

And obviously the heroic fantasy as well as the historical fantasy of Howard. What “they” will say is it’s the history of resolving differences between peoples through war. This is a key point that I dispute, as not all differences can be resolved. For example, men and women are born different (etc.) In a harmonious way, differences stay put and they are resolved through action. Action is not war, it’s low-level conflict., it’s a commune of opposing forces  with a type of rough harmony.

Now, you may have batted an eye at Pictorial 9’s assertion that modern war is “factual”; I meant a drive towards sameness”. The most obvious example of this, actually, is cyber-warfare; it’s an inevitable side-effect of having a single world with a single world-view and just basically opening windows onto that single world (see “Hourglass”). What “they” tell you is that being all the same is a sign of peace but you have to be brutally frank and say it’s the death of psyche. We live in an ego-fixated parallel reality exactly because of this sameness. The war is being waged against the human psyche and “they” are Martians, counterfeit humans. Mars, or Ares, god of war, a distortion of the balance residing in spiritual differences. An affinity between differences, between men and women.

War has a bludgeoning effect on the psyche, subduing differences of belief, increasing facts (a war on nature). Of course, they’ll say facts are facts but not if we live in a parallel reality! Psyche is related to the human physique and ideals of matriarchy and patriarchy. If you go to a museum that’s what you see. All that is human history and what you put in museums, such as the recently opened Abu Dhabi Louvre. I read a review of this (DT) which might be worth a slight digression and attempt to put it in a Howardian context (pardon the phrase) as Sooke is hostile to its “universal brotherhood” theme, What Sooke says is that yoking, say, a carving of Christ to an Egyptian carving is a type of wishful thinking, the history of conflict in the region is being overlooked. Nevertheless, if there is an affinity between differences it seems sort of legitimate. The irony is that Sooke thinks there’s a history of conflict; the Arabs look for similarities; and in Howard’s tales of Arabia there is a psychic affinity in differences. This is something the modern mind finds hard to grasp because it is to do with psychic strength. And yet, that is the history of human culture.

The Abu Dhabi Louvre has hit on this truth seemingly in spite of its appeal to universal brotherhood! The conflicts in human cultures do have affinities precisely because they are different and attuned to different psyches.

Howard’s heroes in Outremer – such as Haroun the Egyptian vagabond and Cormac FitzGeoffrey the Norman-Irish pilgrim – couldn’t be culturally more different, yet they represent a type and so have an affinity. There is a brotherhood of thieves.

This medieval way of thinking might explain why the Abu Dhabi Louvre works despite itself – not forgetting the glorious palm leave domes – but it also hints at Howard’s philosophy that the only brotherhood people have is in blood and reckless adventure.

I think there is an argument you can develop there that relates on the one hand to Howard’s introspective adventurers, and on the other to a sort of war against the human psyche. A war by the serpent of ego-lust residing in the modern maze, a war of reason applied to pleasure (“effect”). The war waged in parallel realities.

Let me give a concrete example 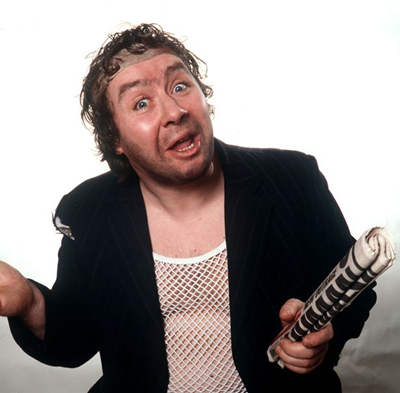 Rab C Nesbitt is a Glaswegian anti-hero of 10 or so TV series, ostensibly a loutish layabout but so droll you have to love him. He always makes me think the 18th century is still around. This comment by Elaine C Smith (Mary Doll) is reminiscent of Grace Slick’s on 50s heroines (And God Created)What is funny for me is that she’s as up to hit him with an Irn-Bru bottle as he is her, that she’s not a doormat. (Daily Record)

That is almost exactly how Slick described Betty Grable in The Beautiful Blonde from Bashful Bend; they aren’t shy to doll-out slaps and wisecracks and filthy put-downs. Whether it’s 50s or 1800s or slob-bound ne’er do well Glaswegians of an indeterminate era it seems to resemble a low-level fight. Rab is also quite insightful and says such things as,

If the Good Lord had wanted us to know about cuisine, we wouldn’t have crispy pancakes;Christmas carols? Oozy, squeezy, treacly middle-class propaganda

Sharp remarks, rough dressing and low-level combat strike one as much closer to the reality of life for most folk in the 17th, 18th centuries. Many people would be rural and completely independent, so they would have complete freedom of behaviour within the bounds of the religious belief of a society, such as a Puritan settlement.

Conflicting behaviour is often the name of the game (the scene with Pat Garrett and his Spanish wife Pictorial 9), and so is completely normal, unless you live in a society where people are not different (men and women), but similar.

The more people are similar, the more subdued and distorted are their psyches. Matt Damon made some relatively obvious observations on male/female behaviour and got 20,000 fems on his back. That is the modern psychosis of similarity. I’m not an apologist for all traditional modes, I’m just saying that conflicting behaviour between men and women is a type of freedom. It’s because we live in a parallel reality of sameness we may not realize the freedom we’ve lost.