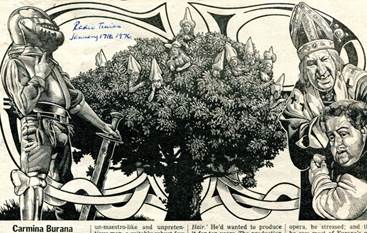 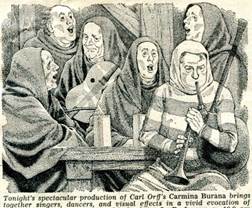 As the ancient Greeks have it, Apollo is appearance not reality, which is born of the lusts Man is heir to. Where you have a highly moral society, such as the Middle Ages, appearances are going to have a moral dimension. The pure knight traipsing off on a quest (as in Monty Python and the Holy Grail); the lady of the lake, dreamlike yet austere; loose-robed monks, communally serene; leatherstockinged herdsmen; huntsmen, forest-wise and shy; demure milkmaids, symmetrically sly, weaving their way by the sty.. In an action-based society, clothing is geared to the body, to the use of limbs, the contours of the figure (And God Created, Pictorial 11)

Clothing enhances and strengthens the figure, so there is a moral aspect to that type of work, which I think appearance points out. Govt or bureaucracy isn’t work in that sense (or moral?) For work to be moral, it really has to be figurative, and enhance or strengthen the body in some way. BWS used to take this attitude to figurative art, a discipline and skill that requires honest labour (in a smock). 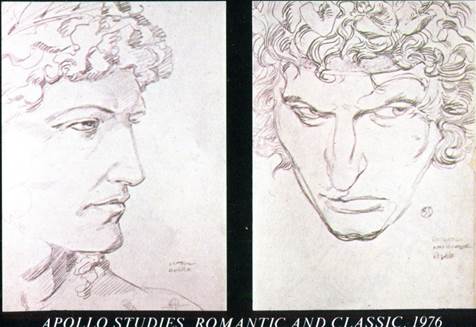 As you can see from these images, appearance in the classical sense is idealism. Not reality, but the idealisation of our experience through time of reality. In other words, idealism has a relation to realism; they are not totally separate things. The reason for this is that time is our experience of reality; without time there is no reality.

What this means is that reality is not what’s actually there; it’s what we see is there at any moment (as you read panels in a comic book). So, what’s actually there is reality WITHOUT the medium of time. This is the famed spacetime continuum which fuses all dimensions into one medium – or geometry, basically. What this seems to suggest is that all relativistic effects are geometrical, and the continuum is the invention that supplies it. It’s a mirror-image of the Maxwell-Faraday equation on a very large scale.

So, that seems to support the point that we live in a world of mirror-images, originating from Faraday’s invention of the solenoid or cylindrical electric coil. “They” will build the geometry (CERN) and continually gather relativistic effects which are the result of the geometry. The aim of the research is to compile “facts” on the origin of the universe, which is actually a mirror-image or parallel one (see CL Moore Tales of Faith 12)

This is exactly where fact becomes fiction; the idea of “ultra” makes of reality a fiction (Pictorial 25 Einstein, top of page). It is a place where you will always get facts – and that’s all – a sort of Arkham Asylum of facts that might as well be fiction (hence the pulp infatuation, see Hyborian Bridge 4 Grant Morrison).

What they are searching for is not a classical reality of proportion; it’s an Arkham Asylum of neverending egocentric facts. Einstein is only the figurehead, who happens to be affable and good PR, unlike our Martian dictators.

Classical reality is proportionate – the head to the body – and so is related to idealism. Appearance has to be seen through time; what they are searching for is just the absence of rhythm, proportion etc. What they call symmetry is not the symmetry we see through time (appearance).

If we see symmetries, I’d say they are meaningful ones. Figurative meaning (Weird 11). The ego is drawn to facts which only relate to mirror-images. In the real world we have to experience the world of half-light, paths of alluring adventure, to really know anything figurative and substantial.

.. was apparently inspired when he realized the moon was bright enough to cast shadows. Meaningful atmosphere unreleted to the maze of the ego. Hyborian Bridge 16 quotes Tim Smith-Laing on labyrinths through history, from the legendary Minotaur of Knossos. The mind is a labyrinth, not the ego: it’s the difference between sun and moon. Mirror-image and reality.

This, then, is the Hyborian Bridge! The weaving pathway through forest and bower, through lily and tulip where Man meets faerie, the lusty gods and goddesses where blood calls to blood and ravens fly.