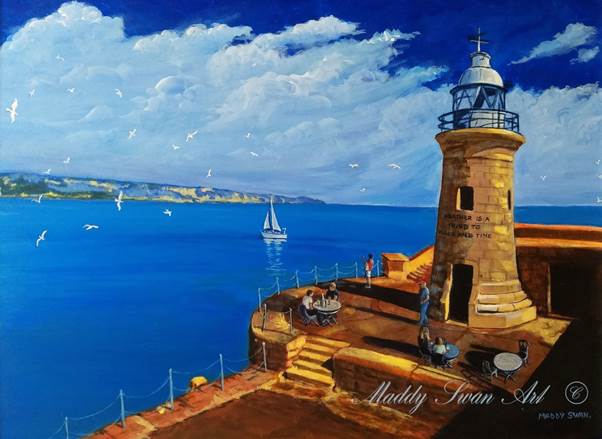 I happened on this painting when meeting artist Elena at a local exhibition at St Eanswythe church (an old Saxon). If you look closely, artist Maddy Swan has written “weather is a third to place and time” - like the atmosphere you find at any given time, what artists draw, the interest and attraction for anything.

The weather – being proportionate – is not something you find in the fabled spacetime continuum; the where and when of things in a geometrical framework. Instead, you’re in cyclical time, rhythmic time, vortical time (The Wizard of Oz).

The cyclical sense of time is totally different to spacetime, which is just a geometry. There is no relation, since we experience cyclical events, seasons, harvests, related to sun, earth, moon. The realism of this experience is life and death, blood and sacrifice, Diana and her hounds, Artemis under the clear starlit sky.

Cyclical time is classical Greek: another day, another death 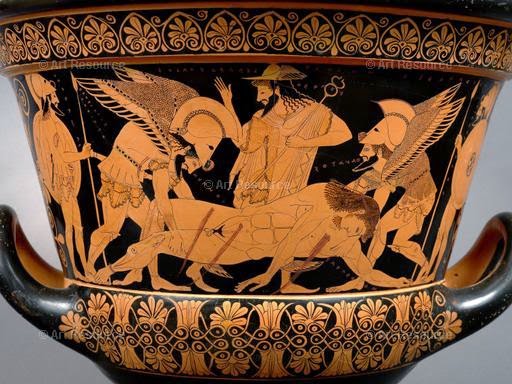 The famous  c515 BC Euphronios krater illustrating the death of Sarpedon, a minor Trojan ally of the Iliad

Greek idealism is every bit as bloody as Howard’s Hyboria, and I think that is a good way to relate them; heroism to realism and the lifecycle of Man. The blood tragedy relates Man to the realism of harvests and herding and hunting for food. The American ranges and the stampeding herds of the west were destined for the meat packing yards of the east (Americana)

The cowboy experienced the day on an epic scale of haze and raucous bellowing of beasts and men; then bloody carcasses hoisted onto hooks and artistically sundered.This quote by an Indian hunter (not Red Indian) puts it in a nutshell

Born intoa Hyderabad family descended from royalty, he grew up enchanted by the hunting tales of his grandfather, who was a renowned Raj-era hunter.. His fame quickly grew.. “My job is of a hangman,” he said. “I am the man who is putting the noose on the convict and pushing the button of the gallows.” (DT)

It’s realism of body and mind, related to idealism of hunter and hero. We are blood, bone and sinew, realism and also idealism. The fantastic difference with modern life is that “realism” is now the ego (head) and we live in ultra-realism that is a pure product of ego; the raison d’etre seemingly “facts” with no basis in classical idealism (proportionate head Pictorial 26).

A world of mirror-images, because a head is not reality; it’s where fact equals fiction, as in Circle, a new TV game show of.. 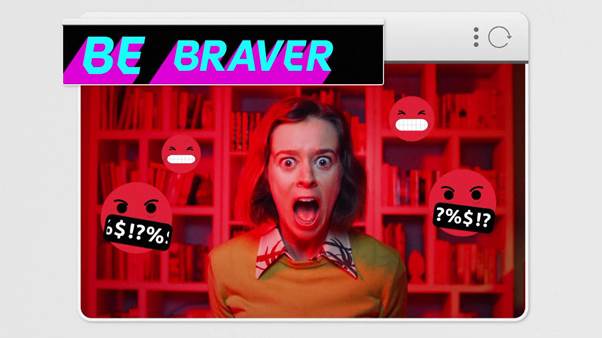 .. half-life, half-death. Without the concept of blood and rebirth there is no sense of enchantment, of forest byways and bowers, of fleet deer, of faerie folk, faerie castles merging on the banks of reflecting lochs..

A reflection is very convincing, isn’t it? The main difference bewteen a reflection and the real thing is that none of the events leading up to it are part of the reflection. It is a pure copy. If we are living in a copy or a mirror-image of reality, what you would expect is that the physical truth – proportions and basic labyrinth of the body – no longer are related to society.

Because, what now is reality? It is what a reflection is – electromagnetic radiation or the sun. Everything is now related to a geometric reality, and not to the human physique (or the psyche). As human beings, we have proportions, have a symmetry, a back and a front, head and feet (“The Enchantment” Weird 11). A relection – because it is the sun – is ultra-convincing and full of facts of the images under consideration, so it is not easy to tell what is truth since everything is wrong, you just have to point out the errors..

A reflection is pure order because it is the sun, and “reflects” the equations of Faraday and later Einstein (prev.) A reflection is only factual and doesn’t have the physical strength and deep-rooted psychic aura of a real place and time (as opposed to the spacetime continuum).

Physical reality is perfect in terms of balance and proportion; running and athletic games; the fleet-footed Diana and her faithful hounds; the hunt and feasting. The throat that swallows the repast is sinuous perfection, likewise celebrated in song.

In a word, that is poetry. Nietzsche’s quote, “Without music, life would be a mistake”, fits perfectly. Reality can be ultra-convincing, but if there’s no poetry or music it’s still a mistake. The best put-down I’ve ever read of a book was Tim Smith-Laing on Daniel Blue’s The Making of Friedrich Nietzsche (CUP)

Blue writes the purest academese..in which nothing goes without saying, as if in homage to Nietzsche’s notion of eternal recurrence, where many things are said more than once. “Without music,” Nietzsche wrote, “life would be a mistake.” Daniel Blue’s book is without music. Even though it sets his record straight, Nietzsche wouldn’t have approved.

Nietzsche never said things are SAID many times, since that statement is basically obvious. He refers to eternal recurrence of events, which is a different thing. Smith-Laing of course knew this, and his twist twists the knife into Blue.

So, it’s not enough to be factual, or even truthful. Poetry is a deeper truth, and if that is absent all is as nought. The raven’s pathway to Hyboria beckons. 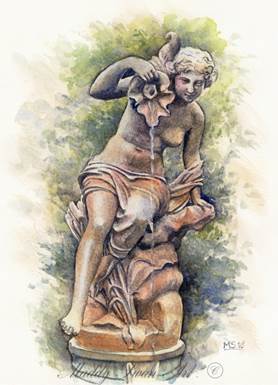 Nymph at Groombridge Place by Maddie Swan, no relation to the blackened, roasting swan from