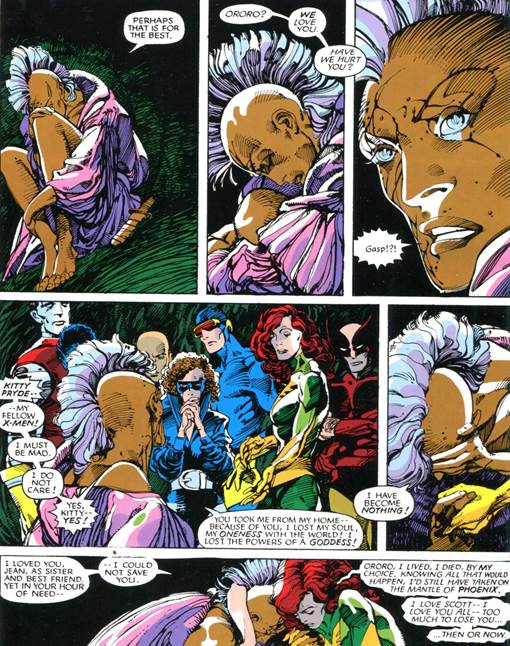 Vanity..vanity that is blind to the rhythms of living in our bodies. Vanity that only values facts that are persuasive to the ego – pure logic that is a reflection or a mirror-image with no basis in rhythmic reality. That does not exist in time and that cannot be experienced. That is half-life, half-death, a circle of nothingness.

Case-in-point, Ryan Bourne of Cato – a US free-market think-tank – had this to say

When the EU’s discussions with the US over the Transatlantic Trade and Investment Partnership (TTIP) occurred, voters worried about Investor-State Dispute Settlement provisions superseding democratic control. (DT)

That sort of language is persuasive BECAUSE it’s very hard to grasp. We vaguely get the general drift of the free-marketeering and he goes on,

..better bilateral agreements can try to maximise the liberalisation components and minimise the mercantilist damage. (see Hyborian Bridge 5, 6 for mercantilism)

Again, it’s a type of tautology; the liberal free-market is better because it’s liberal and free-market. He is talking a fact-dominated logic that is very persuasive to the ego because the mind is grappling with facts that tax its powers of comprehension. Essentially, the reality is very similar to Relativity, because the beauty of balance and simplicity of forceful acrobatic displays of social grace don’t come into the equation (see Helene to Tros after stuffing the Nubian Hyborian Bridge 18)

A civilization of the ego is doomed to failure because it is a mad dream let loose to extinguish a reality of variegated rhythm and counter-rhythm that – like music – draws the action through your mind. By discounting simplicity (and beauty) the ego enters a logical maze of persuasive facts; where fact equals fiction, and no one is any the wiser.

I found a very good way to experience this is in the aforementioned 80s X-Men – treat this, if you will, as an intro to Hyboria. Like Grant Morrison, I see comicbooks as a lifeforce in time and space, the sequences or continuity of 4-color characters that give them reality. The great thing is that the X-Men are antisocial misfits in social settings; Claremont had to work at it, and sometimes a false note is struck. Following the short-lived affair between Forge and Storm (#186), Storm’s fury knows no bounds, as she is persuaded he has double-played her by “following orders” on the use of his neutralizer - a misapprehension that Forge shrugs at, as is his macho wont.

Forge, as a native who disowns his own tradition, is quite a brave character for Claremont to write, and he pulls no punches on his supposed insensitivity. In one bizarre sequence, having been infiltrated by a swarm of Wraiths, Forge and Nightcrawler decamp to the roof of Eagle Plaza. 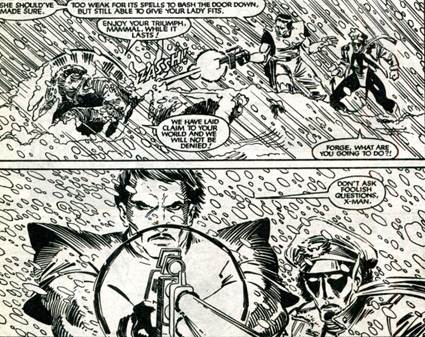 Nightcrawler feels queasy that Forge dispatches the freezing Wraith, even though they’ve been merrily slaughtering them downstairs. It struck me the natives might complain at such cavalier treatment! However, it makes the point that the “simplicity” of comics storytelling  - being sequential and quite musical in rhythmic action – makes it very easy to follow nuances. Claremont developed X-Men with an extended dysfunctional family ever-more reliant on eachother, with the interesting themes of duty or giri (Japanese, natch) counterbalanced to character traits.

The characters do not “fit”; even Peter and Illyana Rasputin are simple peasants more at home with a team of oxen on the Caucasian slopes. No, all they do is act proportionately and sensitively and rhythmically, like animals. That simplicity is all that is needed to drive quite complicated relationships and motifs.

We can only know (or intelligently guess) what’s going on when we see the expression of time and space that we see in comicbooks. Without that, the ego dominates, and everything is a type of nothingness. Capitalists of the likes of Ryan Bourne are hoarding paper money, which is just another name for junk. It has no relation to 17th or 18th century mercantilism (Hyborian Bridge 5,6), proportion and symmetrical relationships in time and place.

We are living in reflections of psychic weakness, because that’s what a head is without the proportionate sense of poise and action – Weird 15 Basically, some heads are cleverer than others, and we are told (by “them”) that – for the sake of argument – Einstein ranks with the powerful mind of professor Xavier. OK, the big difference is professor X is not just a head. He is an active force for good, mentor to men and women who are active in time and space and, through his mentorship, endeavour at all times to act proportionately, sensitively and, when called for, with rhythmic fury (like the acrobats of old.)

There is nothing mental about the world of the X-Men; it is purely physical, with a psychic rapport that is clear and passionate. Anything psychic that occurs in the astral form is still strongly related to physical reality. Of course, we can see this in the comics since, if there were no physical dimension, it couldn’t be visualised or drawn or written down!

Ultra-realism is a reflection of a reflection (originating from Faraday’s solenoid or electrical coil). Because a reflection is ultra-convincing, we (or at least “they”) become ever-more sure of themselves, the less they occupy a physical reality (space). Fact becomes fiction, and the head itself a type of reflection of psychic weakness.

Those who deal in logical facts – like free-marketeer Ryan Bourne – are just reflections - of paper money - that has no beauty or physical reality. There has to be a figurehead for all this delusory gibberish, and it happens to be the “awesome” achievement of Einstein. OK, believe that if you care, even though you don’t know the first thing about it but do live in the universe of time and space.

Like X-Men if you happen to read it. Same thing, then. Same thing for any fantasy world of psychic strength.