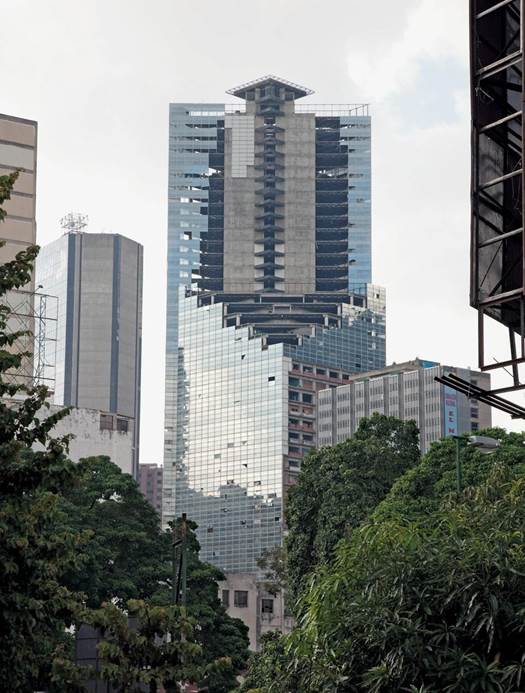 The Tower of David, Caracas

The prophecies of Rachel (see prev) verse 22. And it came to pass, in the garden of Behelzeblaat, Rachel was tempted by an entity, who was not of time, nor of space.

“Rachel”, he tweeted, like a worn-out recording on a hyper-disc, “I, being the ultimate ego, can give you that which you must want.”

“And what is that?” Rachel answered, chewing on a pomegranate.

“Rachel, I give you..happiness.. for it is sore needed in this world of cares.”

“Nay!” quothe Rachel, affronted, “for I see now thou art a mad god.”

“Have a care,” tweeted the mad entity, “for I have power enow to sever your life’s blood!”

“Aye, and that is all thou hast. I see that now. I wouldst rather die than have that I merited not. For, it shall come to pass that those who have this gift shall perish of it, wilting under the fire of nothingness.”

What “they” will say is, why not just take what you’re given, and the answer is they are giving you nothing but sense-data. Whether you pick-up an iphone or travel to Chichen Itza with one, it’s all the same thing; a stream of electrochemical impulses to the brain.

What is the source of all these bits of data? It’s impossible to know without one thing: introspection. The ability of the mind to proportionately act with the body on the adventure of life. The very thing “they” are taking away. The adventure of life invites death; to be aware of it; the power and glory of lifecycles in time and space; the world of the absolute, of the body and of the hero and heroine.

BWS tends to tackle these themes (Weird 11) and they appear in different guises in several of his 70s prints. In “The Enchantment” the world of primal color is evoked as in days of yore. No longer are we trapped in the incestuous urgings of the head. We are hearing music, forebodings of our own demise; the motley colors of nature surround us; the noise of grasshhoppers, the serene gleam of the heavens.

The lifeforce of percussive presence is all around; the hum of creation; the deathknell of destruction. I know that sounds hackneyed – the picture has that effect somehow. Nevertheless, the wiry fronds of pulsating things in a paltry pond have on a microcosmic scale, the eternal round that the picture seeks to impregnate in time. We are creatures of time – without that, all is an exchange of incestuous information. Be it DNA or electrochemical, it’s all the same. That is the big lie “they” are selling us, that our pulsating bodies are not the reality of life, that we must bow to the information god.

I was reading the obit of Mary Midgley, humanist philosopher known for her anti Dawkins statements, and couldn’t help noting she said she “quoted Dawkins a lot because he’s such a good writer that his errors are clear.” You know what they say about publicity! One doesn’t want to speak ill of the dead, but Byronic critique is more my thing - off with the head, then let them speak.

Statement: a genome is an invention of the ego. How do I know? Because it’s an exchange of information. The ego will always inflate the importance of exchanges of information at the expense of percussive statements of survival. If you watch Bruce Lee in action, nothing is superfluous. If one blow will do, it’s the right blow – BAM! The action takes place through time, direct, no preconsiderations, no formula, no routine, just fluid and deadly.

The classical bust of Odysseus at top of Hyborian Bridge 26 works the same way. On the one side is technical knowledge of the sculptor (like Lee has training); on the other is the grace of lithe line and movement. The latter is what makes it classical, the freeborn feel.

A classical statement is temporal, and therefore absolute. A logical statement has no time-signature, and so is relative. Everything in that universe is an invention of the ego. Exchanges of information by an incestuous lifeform from some Martian plateau, sexualised urgings of ego-lust.

Through the haze of history, the noble outlines of temporal temples beckon; not just Hyboria, but the glorious cathedrals, hemmed-in by wending ways, flowering fields, brays of donkeys and lashings of whips, the rank odours of life coexisting with beacons of faith. For the city-state is a microcosm; from stable to stateroom and from yapping dog to fawning fop. 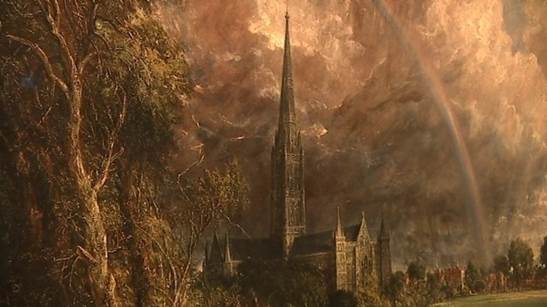 John Constable was depicting ancient lines of landscape that were disappearing in early Victoriana – and why? I think a lot of it comes down to the replacement of an absolute society for a relative one. The rise of the industrial-political class with the self-confidence to impose their rule. The head – or technocrat – takes over from the body – or peasant.

Once the head takes over from the body, the simple and stately rhythms of life are fundamentally changed. The politician is under the influence of the “sorcerer”, inventors of the information exchange systems that replace the stately rhythms of old.  One thing turns into another, where the head becomes a disembodied ego, and the body flees for its life.

The societies are bulwarked by the belief that the new inventions – electricity, DNA (then AI, natch)– are absolutes, instead of being inventions of a logical ego. Hence, the ego replaces primordial nature. The belief persists that the ego, which has no attachment to percussive rhythm –which is dislocated from the primal body– is an expression of nature.

The folly is compounded by the monetary system which oils the logistics of the anti-nature, Anti-Life machine.

Trump obviously believes what he says, since these types are totally convinced by their own ego (and those of others). It’s a fantastic vicious circle of nothingness that feeds off the ego, and the way off it is to realize that without a monastic sense of introspective grace we are as naught.

At the heart of the city-state – as with Florence (prev) – lies such a sanctuary. So it was with Rome (Vestal Virgins Hyborian Bridge 18), so it is with Hyboria. The Tarim, living god of Turan from Conan #s19-25, who sparked perhaps the grandest epic in prehistory!

Let’s go forward to Hildergard of Bingen (Hyborian Bridge 24), the priestess who followed Greek notions of microcosmic correspondance. The body, herbalism, the stars, dryness, wetness, heat, cold. The body governs itself under cosmic influences. Let’s say you live in some place – like Tros did on the Thames estuary (Hyborian Bridge 11) – where a cosmic balance is attained of wetness, shafts of lofty arboreal shade, herbaceous borders, forest clearings of sultry latticework and Nordic stone, galloping horses, chariots, laden donkeys. There is a herbal and atmospheric balance, the like Fflur, medicine woman par excellence, has at her command.

The languid primal rhythms we have untimely lost. What I’m talking about is self-government with no need for formal government. There are a few examples of this that are worth picking-out. 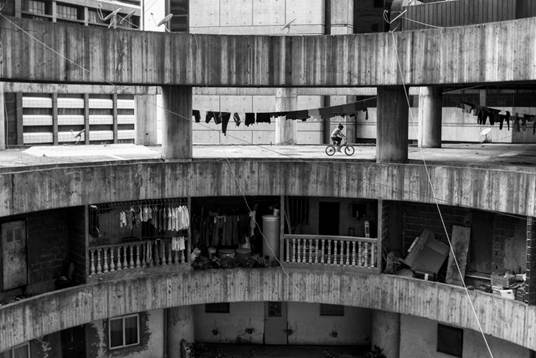 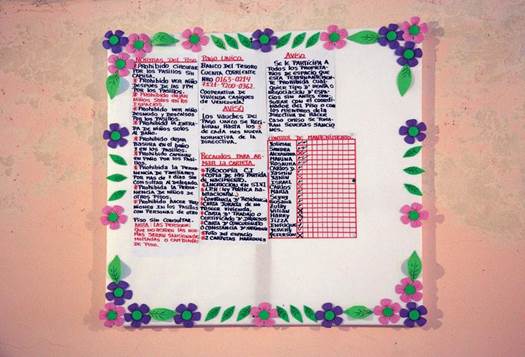 The Tower of David in Caracas, an abandoned tower block where an extemporary society has moved-in, complete with self-governing rules and codes of conduct. The freeborn feel of these photos harks back to classical and medieval societies. The extemporary is not planned; what happens is the city-elders erect monumental edifices for the glory of the state. That is the ordered side of the city (Apollo). Roundabout are the lean streets and wending ways that are disordered and ramshackle –see Hyborian Bridge 19,20 (Bardot NY tenements).

Apollo, as I tend to say, is forever feuding with Dionysus (or torturing satyrs), the two have nothing in common, save that they occupy the same place or time. Do you see where this is heading? We are not the calm face of Apollo because he is the destroyer of life (the sun without shade or water). Yes, we build monuments of order and stone, but we do not rule life, that rules itself. It is stately and rhythmic, balanced and coordinated (like a horse cantering or an ass bearing bales).

Do you see what I’m getting at? Because the head (ego) has replaced the body – as in Cruikshank’s cartoon – the calm face of Apollo runs affairs. But Apollo is only appearance (idealism). Reality is impulsive and propulsive, intensely rhythmic, sordid and Dionysian. These two aspects cannot be reconciled; they are always feuding – and that is the city-state of old. It is exactly like the Tower of David; it is run on an ad hoc basis, the elders lofty in their dreaming towers.

The freeborn feel cannot be reconciled with Apollo: our dear leaders, from Trump to Macron to Putin, are spawn of a relative world of the ego. The ego is not the body, not primal and percussive, not balanced and symmetrical and proportionate. None of these things can be ruled; they can only rule themselves.