The prophecies of Rachel, verse 39.

“Fool!” cried the entity, who was not of time, nor of space.

“All is illusion. The galactic cybernetic corporation provide the best illusions (for a price)”, whispering the last three words.

“Wuzzat?” said Rachel, raising a modest eyebrow. “You said something low, it has a.. price?”

“Yes, these things don’t come cheap, a lot of study is involved. The best brains from the best galaxies.”

“So,you mean you pay for it in dollars.. or galacti-credits?”

“No, the payment is much simpler. Each recipient pays their body into a body-bank for us to wireless it up (blue-tooth.) Their bodies are nurtured but immobilized, kept healthy and   and given fitness regimes of pulsed mekano-vibrations.”

“Mad as a hatter”

Yes, I’ve been ploughing through 80s X-Men in the Essential reprints and, even though not atall Hyborian, are an X-cellent intro. It’s not just the story (content), it’s art (style) and how well it does the job of getting content across.

Taking a cue from Nietzsche (prev), style should feel what the content is about. What is feeling? There should be a looseness of line so that nothing is too imposed, the story appears to flow naturally, panel-to-panel. Modern comics don’t really have that. Here’s a page from X-Men Blue 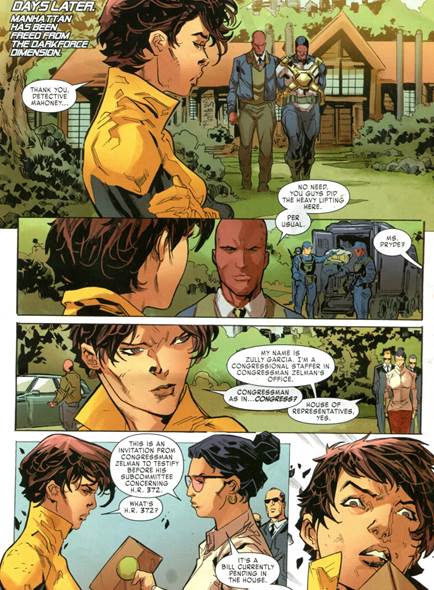 Modern comics don’t have much style in terms of empathy towards the characters acting in sequence – like the thimble theatre of Popeye. Without the style, you can’t also have much content, so both are much less in contemporary mainstream comics.

Both style and content are a priori things; whereas a purely logical argument is not. You can have two characters arguing, but without the sequence that shows them reacting naturally and loosely, the feel is not there.

The 80s X-Men have a simple rhythm that can speed up or slow down and that defines the time (modern comics don’t). Once that is established, the empathy with the story is possible since it is such a fundamental characteristic. CC Beck (Weird 8) used to be strident on this score and retrospectively one sees why.

Any themes – such as distraught angst of Grey/Phoenix, the sordid scenes at Forge’s Eagle Plaza (prev) – depend on a simple sequence. After all, Kirby usually only used six panel pages, with the odd splash! Comics are rhythms, which is why they are exceptional at clever and convoluted content.

What we are told nowadays (by “them”) is that information is the fundamental component; but that’s only for a detached head. Information without rhythm is pretty nigh context-free, as the style is what delivers the content and puts it into context (in a sequential story).

What we are living in is a world of information (political) but not rhythm (community). In the latter, people’s habits and manners are recognized and understood, over time and in space.

This is what ancient societies, communes, city-states are. First and foremost they are simple rhythm; only then are they political/trading etc. A rhythm defines time in a particular place, like a flower buds. There are always two things going on at any one time (and place). There are logical arguments; for example, an Argossean captain can be disputing with a merchant over the payment for his services. Then there are the habits and manners of the two – speech, dress, custom – which differ and which have a perfection over time.

Logical arguments flatter the ego; it is exchanges of information (as with the genome: an invention of a logical mind, see prev.) It is always imperfect, characterized by disagreement. Instinctive, muscular action by contrast has the perfection of moving through time with grace. 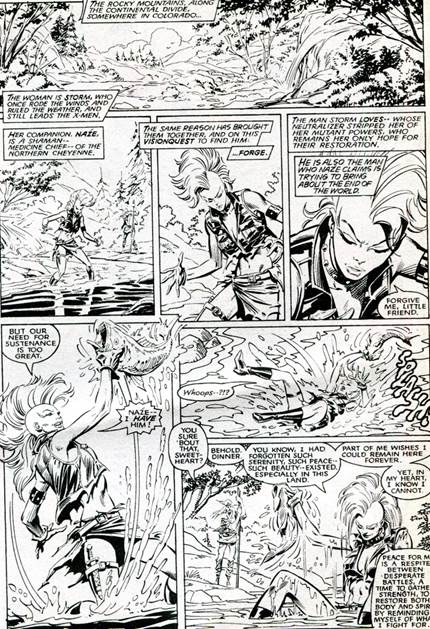 Hunter’s joy at the kill

This is the world the ego denies because it is sheer perfection – body, soul and instinctive reaction in nature. There is no thought needed; there may be training involved but there are always two aspects to action – the body is honed, then it is free to act with looseness and grace (see Bruce Lee The Big Pretence). Grace cannot be taught but it can be lost.

The conundrum is that the more the ego is flattered the more imperfect things get because the sequences in time (and place) are lost. The essential reality of style and content that you see in 80s X-Men.

The entire modern world is predicated on the notion that perfection in time doesn’t exist; this allows the ego to flourish, reflections of the great Trickster, or supreme sorcerer. Everything is reflections of reflections, somewhat like Forge’s Eagle Plaza under the malign influence of Naze. The trouble with reflections – as Storm found – is they are both fact and fiction. The two blur into one because there is no a priori reality of style and content in time and place.

This is what a city-state returns to –a return to origins. It is CL Moore’s ambiguous symmetry – irresolvable opposites that appear in one place, the atmosphere of polyglot Martian bays (Tales of Faith 12) 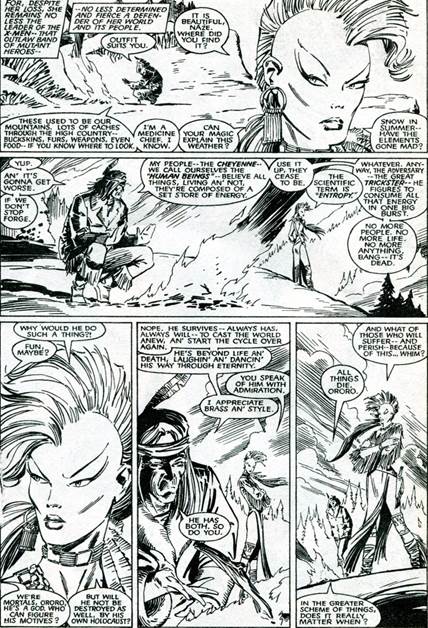 Entropy – Storm notes panel 2 – is a fundamental concept of science, which takes as axiomatic that things tend to run down. As you can see in the pictures on these pages, though, there is a perfection of grace in the movement of bodies through time. Perfection is not an energetic concept, it is a product of balance and proportion on an epic scale. The human figure, the cosmos. Science turns away from this, and so enters an imperfect world. Away from self-governing communes that are memories in time and place, and from ghosts of present and past. 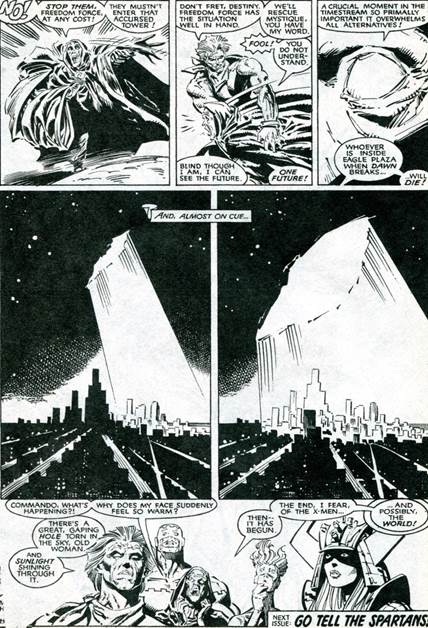 Night turns to day in a chaotic jumble of epochs – information without the temporal lifecycle of life and death. Reality is split by the sun, and entropy runs amock.