I keep getting the idea that if Einstein were certified it would make a lot of sense, the warping of spacetime and all that shit. Since he’s not, there are two possibilities: either I’m mad or the acolytes are. On the former, no comment; on the latter, there is a case to be made for a pathology that seems to stem from the mind of the supreme-sorcerer.

If you assume we may have lived in days of yore in an action-packed universe that was strong and fertile (gay, Dionysian), the notion of chronology is at the forefront. Stated simply, wild beasts chase and devour their prey, thus establishing a stable cycle of lifedeath.

Chronos, in Greek myth, was one of the original Titans who defeated the warlike Uranus. Captain Marvel, as we know, is set on Titan, and Starlin outlined the story in #29 (“Metamorphosis”) 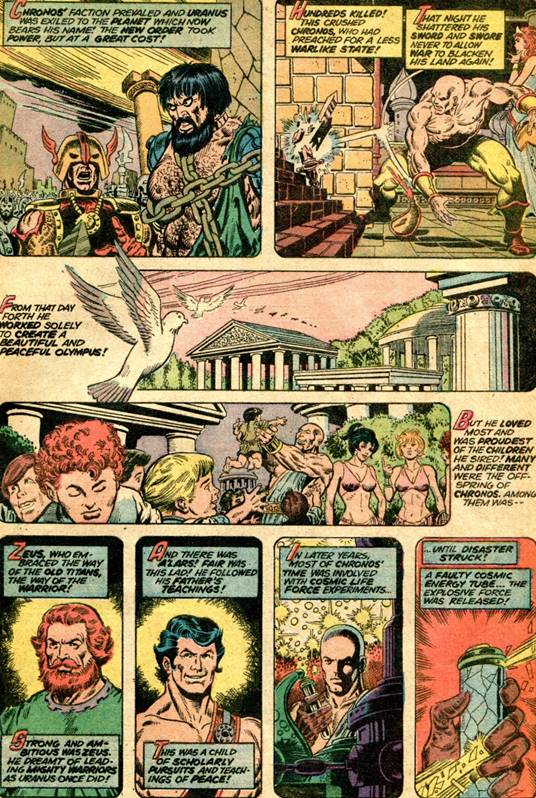 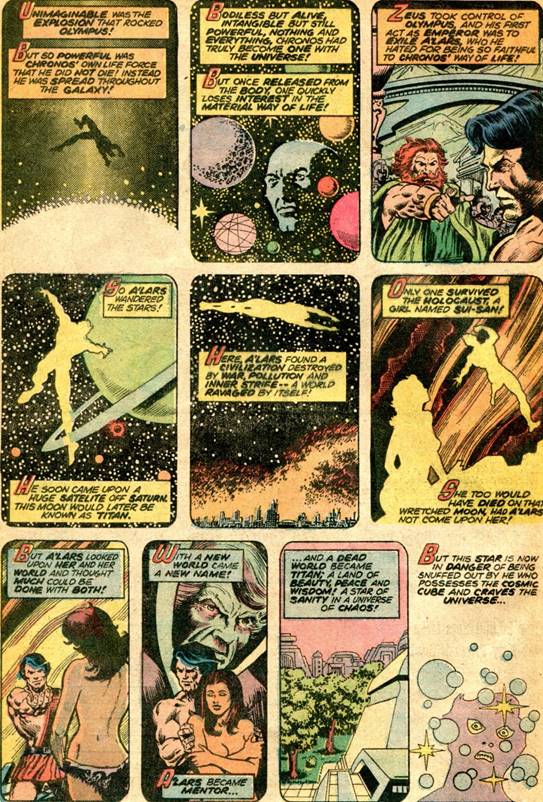 Any idea of action has to involve symmetrical beings who develop limbs in the correct sequence; in other words, it’s the development of form, beauty and so forth. Thus is the warrior born and the maiden too. Anything that emanates from an origin – as we do from an egg – also has to have a chronology. So, the same applies to Theosophy which supposes an absolute origin for things (Hyborian Bridge 44)

Basically, all that seems fantastically obvious, since only a madman would say things can develop rationally in the wrong sequence! All the strong forces of fertility and anti-pathology develop from the world of action and the hunt and the fir forests of the north (seeing as its Yule). Christmas, as I mentioned awhile back, had twelve days ending up with the epiphany when the wise men paid homage to the infant in the manger. The definite sequence was God-like.

It was Nietzsche who said, “God is dead.. and we have killed him.” Could there be taken further, to say that there is a pathology of anti-Godness? As I tend to say, pathology is weakness; nature is strong and destroys pathogens. Weakness allows pathogens to build-up and we have devices like Gates’ toilet (Hyborian Bridge 31), sophisticated contraptions that are there to counteract pathogenic weakness – lack of strength and fertility, see Adastra in Africa Tales of Faith 2

Going back to X-Factor, this is essentially what happens to Cameron Hodge – courtesy of Archangel - who becomes a disembodied head grotesquely surrounded by a spider-like machine (electronic life-support system Hyborian Bridge 37) 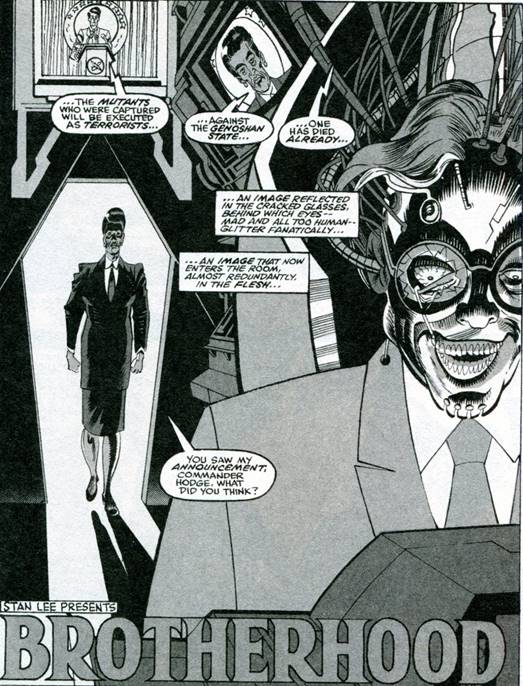 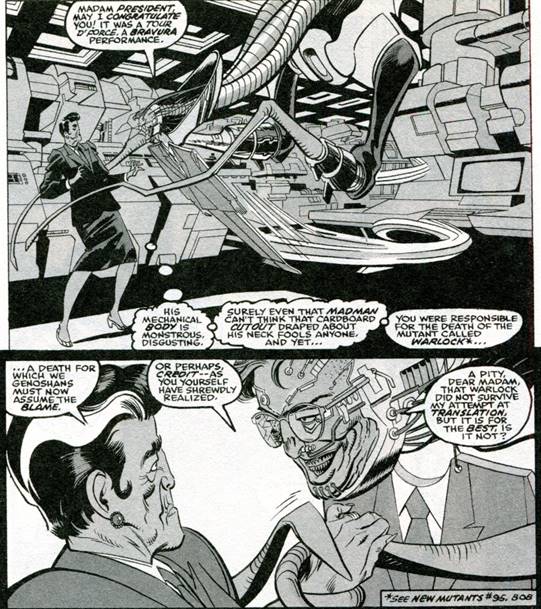 Since Hodge has become just a head – a blatant parody by Louise! – he is essentially an electronic lifeform which needs hygiene or it would not function (his head would rot off). Now, I’m doing a sort of “overlap” between Hyboria and modernity, and the closest comparison is probably the man-serpent from Conan #7 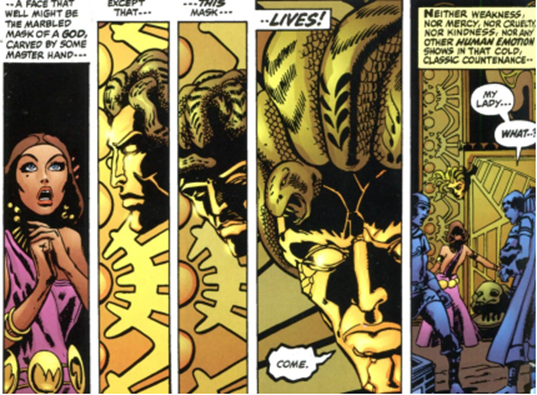 While, in our modern age, the grotesque reality of the situation is hidden by the ego (Cameron Hodge), in Howard’s fantasy situation what WAS hidden becomes predatory and ultra-violent. A similar fantasy as in the Grand Guignol Hyborian Bridge 36, 43. The reality is illustrated by the fantasy – see BWS quote Hyborian Bridge 44. 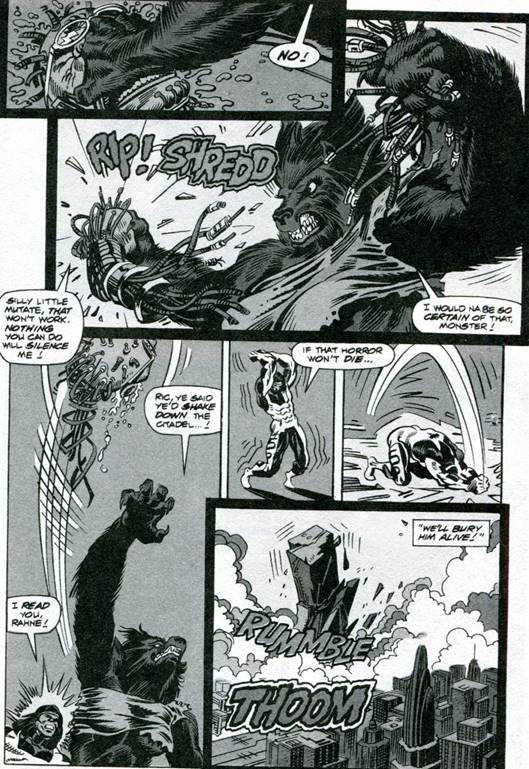 What Hodge has become is a “hygiene-machine”; an electromagnetic device that needs hygiene in order to exist. They are two sides of the same coin. In other words, instead of the natural cycle of renewal – Chronos, seasons, harvest moons, gaiety in the land

Electrodynamism is always tied to hygiene and weakness, and not to strength and fertility. Going back to Tales of Faith 10, you might care to note the distinction made there between a tradition of empiricism – such as cleansing rituals of Mosaic Law (around the time of Exodus) – with The New Atlantis which introduced modern rational (scientific) empiricism of the mind.

This introduces the rule of order, or a parallel reality of logic where there is no balance and proportion, where fact becomes fiction (see passim).  Since Relativity is a reflection of electromagnetism (Faraday), it makes this rule of order appear ultra-convincing (since reflections are convincing – sun).

It’s a type of pathogenic PR, since the head is tied to machines which need pathological hygiene. They are two sides of the same coin, and outside of natural cycles of renewal. The talking-head – like the “hygiene-machine” of Cameron Hodge – will keep talking BECAUSE it exists in a hygienic reality. All the facts it spouts are born of ego-weakness and not of physical substance (body), which puts them completely outside ancient practices such as Mosaic Law.

In Tales of Faith 10, rituals and taboos cleanse the body of dirt, anoint with oils, perfumes etc for those who frequent places of power – meaning cultivated land, hills, olive groves, natural cycles of fertility. Mosaic Law is a power not unlike the Roman practice of natural springs and baths (Weird 11).

In places of power there is no need for PR, no signs of weakness. Yet both these are empirical traditions of bodily custom. Modern, scientific empiricism dating from The New Atlantis has now become almost pure PR because of the fact it is tied to convincing reflections of “hygiene-machines” (CERN, Dyson etc.)

The heads – like Stephen Hawking – keep talking their words of weakness which are in the land of reflections and not of the physical reality of bodily substance, born of natural chronologies. Places of power – born of seasonal cycles and fertility – are powerful BECAUSE they are non-hygienic. The body of the warrior attracts dirt and thereby requires cleansing rituals (Pictorial 21). Elizabeth Archibald in Did Knights Have Baths notes they might after jousting or journeying. IE when pretty smelly or bedraggled.

That is life in the rugged raw state where chronological sequences are the main reality – action, I mean, animal-like, energetic. Without the muscular figure (body) in nature – in field or on horseback – we are being driven by “them” into a pathological weakness of reflections. The man and woman of endurance will prosper when strength will return to the land, places of power and predation, battlements and birds.

You probably think all of that sounds atavistic, to which I could ask, why are 30s pulps and fantasy attracted to such times? Because the bodily power of dirt and cleansing predates the era of hygiene-machines that have no such power.

From such machines spring the PR head; Cameron Hodge began life as an advertising PR for X-Factor you may recall. The head is born of weakness BECAUSE there are no natural chronologies to fortify land and body alike.

Natural chronologies cannot be hygienic – leaves die, fruit rots –and that sustains the land. The world of PR is the world of hygiene and the ego of the supreme-sorcerer.