There are several sci-fi stories of the type whereby a sort of lustworthy vulgarity goes up against a world-devouring ego and seemingly against all the odds is victorious. There’s the classic ‘Repent, Harlequin!’ Said the Ticktockman by Harlan Ellison from 66. There’s AE Van Vogt’s Tyranopolis (73) where the hero invents a futuristic version of a neuro-net, pervasive communication, but uses it against an evil global dictator. Right at the start the hero impregnates a gorgeous trophy wife so as to be able to hide his secret in the zygote.

His son Orlo is closely watched and taken into the royal palace with a group of communications pioneers. There he is presented with a trophy girlfriend. Sheeda has a playmate’s symmetries, yet her mind is no idle plaything and the sexual logic of their relationship acts as a counterbalance to the insane logic of the dictatorship which elevates only stupidity and craven loyalty. Van Vogt – as a technologist – is maybe too kind and only on the last page does he get his comeuppance, from the court jester doing a dance with a papiermache sabre.

He was still laughing when the sabre – which turned out to be razor-sharp metal alloy – swung through the air and sliced off his head.

Warren Ellis’s Transmetropolitan (DC Vertigo) takes that a stage further into downright coarseness with Spider Jerusalem as the net-enhanced clown taking on the presidential vileness of “the Smiler”. The coarse psyche of the clown names truths in a frolicsome way, is let away with devilry and with guile, wit and flourish can accomplish what brain cannot. Intelligence is not all it’s cracked up to be; the dictator is an analytical megadon but lets his guard down for a minute of tomfoolery and is left headless. This is how things happen despite what “they” tell us. It’s all about timing, acrobatics. They tell you that body is about biorhythms but it’s not; it’s about perfect symmetries. Left, right; up, down; front, back. That is what distinguishes a male body from a female body.

That is what lust is. Kurt Vonnegut used to say “bad chemistry” (or good chemistry) causes human beings to do things. God, he’s so the pessimist! It’s not that we “are” chemicals; the human physique can produce chemicals that are “bad” (or good). We are our physique; we honour our body. We are not chemicals, we are poise, balance, sweeping and lethal movements. That is a type of optimism that sees things for what they are, that is not fooled by science. We are not as complex as “they” would like us to believe; we can cut them down using our bodies and finely-tuned minds. That is a truth that is, as they say, uncomfortable.

I think Vonnegut got more depressing with age, so I don’t wanna say more. Intelligence, without the symmetries of lust and desire and sexual logic is, frankly, stupidity, and that’s what they’re trying to sell us. Like the logical circles of Van Vogt’s tyrannical maze, they tell us how inevitable it all is..

The basic fact is no human or group of humans will ever understand how the genome works.. There is only one solution: artificial intelligence. It’s the best technology we have in our systems to understand complex data. (Brendan Frey, DT 28 August)

Frey is a member of Toronto’s Mars Discovery, the world’s premier AI/algorithm/neuro-net/robotics research centre (didn’t all that start with Max Headroom in the 80s?) Artificial intelligence, in a brief nutshell, is layers of coding that self-learn or improve. What one character in Tyranopolis says is, “It works, but it’s not for human beings”, and the same applies here. Yes, it may work if you want to be a human robot that has symptoms, that gets treated, that lives then dies. All that means is that you’re in a symptomatic maze of machine learning.

This isn’t about disease, it’s about what constitutes human vitality; unconscious power and the knowledge of psychic health that comes from that; the rhythmic symmetry of our own beings with the symmetries of nature; our affinity to wildness, symbols; our psychological urges; our primeval visions. All of that constitutes health, body, mind, and it’s nothing to do with sickness. “They” want to cure sickness (Musk et al). We want vibrancy, not sickness. We are not inward-turning but outward-turning to the primeval symmetries of grandiose nature. That is where health lies, not in some lab or institution.

Let’s suppose they even get some ways to “cure” sickness. So, then, people live and die. Then what? No, we crave vibrancy, a rhythmic sense of awareness that restores primeval euphoria, the power within us reflects the power that is with nature. Human culture cannot escape that except into death, because that’s what a life without power is.

Their knowledge is not power, it’s weakness, and yet another manifestation of foulness. We must take back for ourselves, with our bodies and minds, the wild places that are rightfully ours and thereby restore true health, which is the primeval euphoria of the mind applied to the body, the physique and all that implies.

Not lack of sickness because that’s just a pipedream of stupid robots. We want the experience of primeval symmetries in all their power; those will provide a type of tribal knowledge at present lost to Man. We don’t want lack of sickness because it’s essentially not a human thing to be; we want the freedom to be what we are with our bodies and minds a full constituent part of the living shapes that make up earth. It’s not a comfortable place to be, it’s fairly filthy. Is that not an age undreamt of?

I wonder if you got the impression “Council for Action” illo(s) is/are atall reminiscent of heraldic emblems? What you get in heraldry is that animals, a bestiary, motifs of nature, symbolize human worth, gallantry and so forth. The symbolic represents a powerful, iconic physique and a power of mind associated with it. The medieval world in many ways was coarse and bloodlusty, but it was above all a world of action.

Where you have action you have coarseness, (and in a sci-fi contex court jesters and lethal acrobatics). These ancient worlds – and of course the fantasy Hyborian Age – are spirited in a big way or, in other words, spirit is associated with the physical reality. They’re coarse and they’re spirit together, and that is a type of reality we’ve lost. We’ve lost it because we are outwith the iconic physique, animal, plant, fauna and flora, a bestiary of common associations.

Another way of putting it is that technique, medical technique, downplays physique. For one thing the world we live in is concreted over, whereas medieval castles are surrounded by moats and fields. The real question is, do you want to live a life that is “healthy” while stripped of the pungent settings and exotic physiques of yore?

Your physique is your own and it is a type of power that can be exercised among the wider emblems and physiques of nature. That is, of course, a life of action, of Man the hunter-gatherer or of any lifestyle in open prairie. The symbols and meanings of this life relate the physical to spirit, and there is a coarseness and pungency to the daily round.

It’s that mix of coarseness and spirit that have to be reclaimed; it’s not “health” because health is just lack of sickness. It’s power, and what is the point of health without power? The world of action, of physique, is the one of power and anything else is not reality on that scale. An endless quest for health has to end with the grim face of death; ironic or not, that is the truth.

In the ancient scheme, the human is the measure of all things – something like da Vinci’s Vitruvian Man – the Renaissance, classical (and medieval) concept that the shape of things is significant. It could be that romantic comic artists like Wally Wood or BWS identify significantly with that old-time ideal?

Greek myth is transformative in terms of shape; which means truly transformative, iconic and real, something you can see, touch, feel, hear, fear (not “factual”, felt). Zeus transforms into a bull to carry Europa off over the waves to the island of Crete.

Lust in ancient myth is as real as the waves, as the air you breathe.

What that basically says is that what was deemed real to the ancients was the pungency of a sea breeze, the bestial frolics of a horny bull, the gay prancing of Perseus on mighty winged Pegasus, fragrant Daphne feeling to the laurel from Apollo the sungod. Reality to the ancients is not transformed by any technical process. No, it is actually transformation itself in the natural world that is the reality. Therefore it is perfectly identified with significant physique, the more significant the better as with the lithe lines and bestial strength of a bull. It’s coarse and vulgar but with tremendous spirit, gusto. Spirit is the shape of things in their transformation. 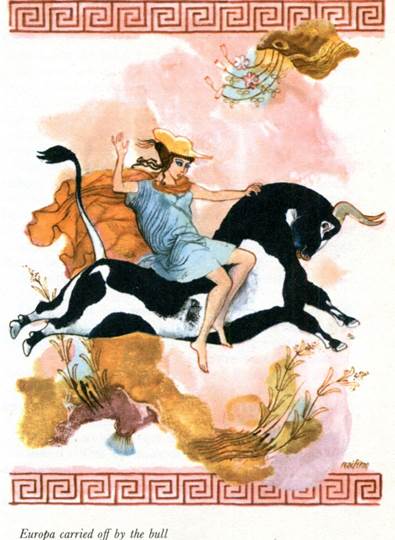